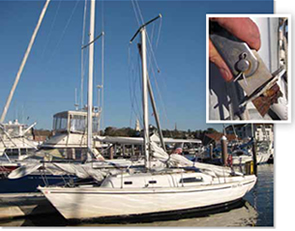 I was prompted to send this email after seeing the photos of failed chainplates in the November 2011 and December issues. Over Columbus Day weekend, I was sailing my father’s 1974 Pearson 30 to Block Island, R.I., from Newport, R.I., in the annual NYC Columbus Day race when things got exciting 3 miles south of Point Judith in 15- to 20-knot winds and 3- to 4-foot seas. I heard a loud bang, and looked up to find the jib and top half of the mast gone. The windward chainplate for the upper shroud gave way, and within the blink of an eye, the top of the mast was touching the water and the jib/headfoil were under the boat. Fortunately, no one was injured, and after about an hour and a half, we had everything back onboard and secured.

It turned out that the stainless chainplate failed due to prolonged contact with rotting balsa core in the deck, wet from chainplate leaks and somewhat concealed by the chainplate deck plate. Clearly, owners of older Pearson 30s should check their chainplates carefully, and ideally remove them for inspection and replacement. I have also seen one fail on a Pearson 30 due to metal fatigue from stress as the bulkhead the chainplate was bolted to wasn’t aligned with the shroud.

Regarding your December 2011 PS Advisor on expired flares: I am a member of the Kennebec River Sail and Power Squadron in Maine; we dispose of expired flares by using them in a picnic/educational session. We gather annually at a safe place (with clearance from the fire department and police) and allow members to practice firing flares and other signals. It’s a great time and a great educational opportunity.

In response to the December 2011 editorial: Chuck Hawley has been a good friend of mine for many years, and nowhere will you find a man with greater integrity. To even suggest that he would whitewash a U.S. Sailing report on the safety of tethers and harnesses sold by West Marine is preposterous. It would be very difficult to find someone more knowledgeable about marine safety and more giving of his knowledge than Chuck. I am also fortunate to count among my friends Randy Repass and Geoff Eisenberg, founder and CEO of West Marine, respectively. Their commitment to safety at sea is equally strong. The last thing they would do if they found a flaw in one of their products is sweep it under the rug and endanger the lives of mariners. Bad things sometimes happen on the water, no matter how good the equipment is. There is always room for improvement in the design of safety equipment, and West Marine has been a leader in that effort for many years.

I purchased a Hinckley B40 last year that came equipped with a backstay-mounted Forespar man-overboard pole (www.forespar.com). My B40 has a Navtec hydraulic backstay adjuster, and attached to this with two hose clamps was a large PVC tube that held the base of the pole. The tube diameter was much larger than the pole base, allowing the pole to slop around. Taped to the backstay itself was another PVC tube that the pole’s flag slipped into, and the groove on the float for the pole was not able to snap onto the backstay. All in all, it was a pretty ratty-looking setup.

I contacted Forespar seeking a better-looking base and flag holder. They sell a PVC flag holder that attaches to the backstay, but they do not make anything for the pole base because of the infinite variations inherent to boats. So I had a local machine shop fabricate a stainless-steel base that clamps to the backstay turnbuckle. The base unit has a hole drilled in the bottom to allow water to drain and is the proper diameter to hold the pole securely. I purchased the flag holder from Forespar and now have a setup that looks great and holds the MOB pole securely in place.

Well done. Note that those with insulated backstay antennas will need to find a different approach to mounting an MOB pole.

Until last winter, I had never heard of the Northill anchor that PS Technical Editor Ralph Naranjo used to secure his Cape Dory 19 during Hurricane Irene (PS, November 2011). I had been having a hard time securely anchoring my Starwind 223 in the increasingly weed-covered bottom of the Great South Bay near Atlantique, Fire Island, N.Y., when I acquired a Northill simply for its beauty, thinking it was too large and unwieldy to easily retrieve, de-mud, de-weed, and stow on my boat. With some experimentation, I figured it out and now use it in that area, though I still use my Fortress in most other situations.

Would you share with me any knowledge you have gained in your use of it? I saw an old ad stating it was made of 18-2 stainless, but I wonder if it was a grade less corrosive. Have you used it where the wind shifted around in a circle?

Designed by aviation guru John Northrop and Harry Gesner in the early 1930s, the Northill seaplane anchor was fabricated from corrosion resistant 18-8 stainless steel. Its folding arms and stock allowed the appendages to be tilted up against the shank for more compact storage. The large flukes are tapered to spike-like tips, ready to jab their way into a hard-packed bottom or work their way through a tangle of weeds. Even the stock adds holding power when the anchor buries itself in a soft bottom. In short, this patented anchor was a very clever alternative to the deadweight approach to staying put, and it’s worth keeping a lookout for one of these vintage beauties at a flea market or yard sale.

The Northill comes into its own when it’s time to get a high holding power anchor to windward in a hurry. Its grab per pound is impressive, and for kedging off a sandbar or adding some safety margin in a blow, it has a lot to offer. A handy trick for CQR users is to tie a 7/16-inch Spectra line (at least 20-percent longer than the HW depth at the anchor) to a shackle attached to the crown of the CQR. Add a float that shows your anchor’s location, and if bad weather approaches, simply untie the float and attach the Northill with two turns around the anchor’s shackle, then fasten with a bowline and enough of a tail to add two more locking hitches, and drop it to windward. The tandem-aligned combo is very drag resistant.

In the December Mailport letters, questions were raised concerning adhesion. Adhesion failures are due to improper prep. A boat owner is well advised to freshwater rinse the hull, then solvent wipe to remove oils after sodablasting. We have seen cases where there is still mold release wax on the hull, preventing good adhesion from the beginning. After the hull is cleaned, it must be sanded with 80 grit on an orbital sander for good adhesion. Painting directly after sodablasting is a recipe for failure.

Have you done a piece on ice blasting paint off a hull?

I read with interest the recent article about sodablasting (October 2011). Unfortunately, the boatyard I frequent insists that blasting with ground walnut shells is the only way to go. I am very interested in your take. Thanks for your input.

When it comes to blast media, the three big concerns are abrasiveness, surface preservation, and cost. Ground up walnut shells have been used for blasting for decades. Like soda, it cuts paint but leaves the gelcoat. And just as sandpaper is rated by grit, blasting products are rated by various numbers, including mesh size, density, and a hardness, or Mohs, number. As with sandpaper grit numbers, the lower the mesh size, the coarser the blasting medium. Mohs numbers go the opposite direction; a higher Mohs number means a harder medium. Walnut shell comes in a range of mesh sizes and shapes, so blasting results can vary. Fine, round shell, for example, will be less aggressive than larger, irregular shell. So it pays to know what mesh size walnut shell your blaster is recommending. The idea, of course, is to use something that is effective on paint, but harmless on gelcoat. While the finest mesh size walnut shell compares to baking soda (mesh size range from 50-170), it also comes in much coarser mesh size. For a newish FRP boat such as yours, soda blasting would seem to be the best choice, but we’d not write off a fine mesh-size walnut shell, which has served fine for countless paint-removal projects. Remember, the skill of the operator is just as important as the blast medium, so we’d recommend going with someone who specializes in paint removal—not the jack-of-all trades with a rented blasting gun.

As far as blasting with dry ice goes, it is a very fine blasting media, but it’s more finicky and more costly than soda—plus there are CO2 emissions to worry about. We have not heard of it being used on boats, but it would seem a possible option as it is used for manufacturing molds.

Product Update
Where Credit Is Due