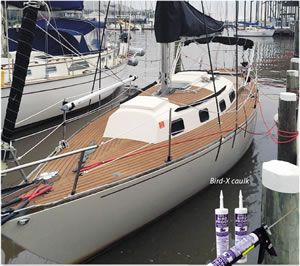 In regard to your March 23, 2015 blog on bird deterrents: I moved to Florida a few years ago and was the only sailboat in a 20-slip location. Little black birds infested it right away. I tried flying owls, kites, balloons, sitting owls, snakes, etc., and nothing worked for long. Those little black birds would sit on top of my Windex and spin around, and poopall over the boat.

I finally solved the problem. No bird has set foot on my mast or spreaders since I got a product from Home Depot called Bird-X (www.bird-x.com). It is in a caulk tube and applied with a caulk gun; it does not get hard but remains sticky. The birds hate it. A thinline of Bird-X caulk on top of the Windex stopped all birds from lighting up there and everywhere else up the mast. It has been two years, and I have not had to re-apply.

Even if you achieve some initial success, birds will usually get used to the deterrent after a while. But what Ive learned is: 1) You have to know what birds youre fighting; 2) You have to learn what theyre afraid of; and 3) Whatever deterrent(s) you deploy must change frequently.

For gulls, Ive had some success with simply arranging black dock lines to look like snakes. For ospreys, creating a nearby nesting platform on a pole, if possible, is the most effective deterrent because osprey nesting pairs wont set up camp near another nesting pair. But starlings tend to be the problem-hundreds park themselves all over the boat and trash it in minutes with red berry poop-so I try to remove everything I can during the lay-up season. Ive also tried covering the boat with tarps, but windstorms play havoc with them.

Ive found the BirdXPeller Pro (Bird-X BXP-PRO 1; www.bird-x.com; $135 on Amazon) to be very effective with the right predators, maximum volume, and random/long delay activations during daylight hours only. Another advantage of this unit is that it also repels annoying people.

Teak Wonder is distributed in the U.S. by Scandvik Inc. (www.scandvik.com), and it is available through U.S. online retailers like Defender, Jamestown Distributors, and Fisheries Supply. Chandlers that stock it include Sailorman, Budget Marine, and National Marine.

Weve heard good things about it from local boatbuilders, so we will be including Teak Wonder in our upcoming long-term test of wood finishes and deck sealers.

The Clarification section in the February 2015 issue says the online version of the 2014 article index is correct. Can you tell me where to find it?

Starting from the Resources section (on the bottom right-hand side of the www.practical-sailor.com homepage), you can locate the index two different ways:

2) Click on the Archives link, select the December 2014 issue, and then click the Download this issue link located just to the right of the issue name.

We are trying to buy the last tackle box we will ever need. We were hoping to find one made of aluminum, but everything seems to be made of plastic these days, not something that would survive the cruising lifestyle. My best idea so far is to buy a tough, steel, can’tilever toolbox and give it a good coat of Rustoleum.

Large, rigid tackle boxes are a headache to stow. Plus the plastic ones are susceptible to UV degradation and weathering, and metal ones are likely to rust. If you insist on a hard case, check out Pelican (www.pelican.com), whose rugged cases (like the 1460) can be customized for fishing tackle and have done well in our tests.

However, we recommend using a large, easy-to-stow, soft-sided tackle bag like those made by BlackTip (i.e. product No. BGDF0297; www.westmarine.com). You can fill it with the clear, divided Plano Stowaway utility boxes (www.planostoragesolutions.com), which make it easy to organize and neatly stow your tackle (one box for offshore rigs, another for inshore, etc.), and they make the gear easy to access; just label the clear plastic box with a Sharpie, and no more digging for what you need.

Based on PSs test results (see PS January 2012), I refinished my nonskid using the Durabak white textured-UV product in 2014. I followed the instructions scrupulously, applying two coats after careful preparation.

I was originally very happy with the outcome. The nonskid is very aggressive, which is exactly what I wanted. For the first few weeks, the paint was very white, but the brightness dulled a little bit to a very pleasant-looking light gray.

I contacted the Durabak distributor (www.durabakcompany.com) and the manufacturer (Cote-L). I sent them paint chips, and their analysis showed that it is not an adhesion problem (so it is unlikely to be caused by faulty application), but that, for an unknown reason, the second (top layer) is separating from the first. Also, the change of color that I had observed was not supposed to happen. Neither Durabak nor Cote-L can explain what caused this color change. Their recommendation is to clean the surface and apply two additional coats of the same material.

Another readers letter, which we published in the March 2012 Mailport, also reported an issue with Durabaks color fading. Our Durabak long-term test panel has shown no signs of fading or flaking, and its been in the Florida weather for the better part of 2 years. The Durabak that we applied to the Chesapeake Bay-based Union 36 PS test boat in 2011 also is holding up well to weather and wear.

Durabak told us that they did not know what might cause these problems and that the flaking you describe was the first example theyd seen. Although Durabak was certain it was not a case of a bad batch of paint, theyve offered a replacement product at no charge.

The maker of the KISS-SSB Grounding System (counterpoise) did not tell Practical Sailor that its product will not work as designed with the GAM-McKim Split Lead Antenna, as implied in the December 2014 Rhumb Lines column. Further clarification appears in the online version of that editorial.

The article on remote oil filters that appeared in the February 2015 issue included a statement regarding the risks of a remote filter causing a drop in oil pressure, if it is mounted high above the engine. In short, boat owners should consult their engine manufacturer before modifying their boats oil circulation and filter system. And, as with a stock oil system, you should always check oil pressure immediately after changing oil. A more detailed explanation appears in the online version of the original article.

Blue Water Paints Gold Coast SPC is an ablative paint. It was mistakenly listed among hard paints in the Value Guide on page 9 of the April 2015 issue. The online version of the table has been corrected.