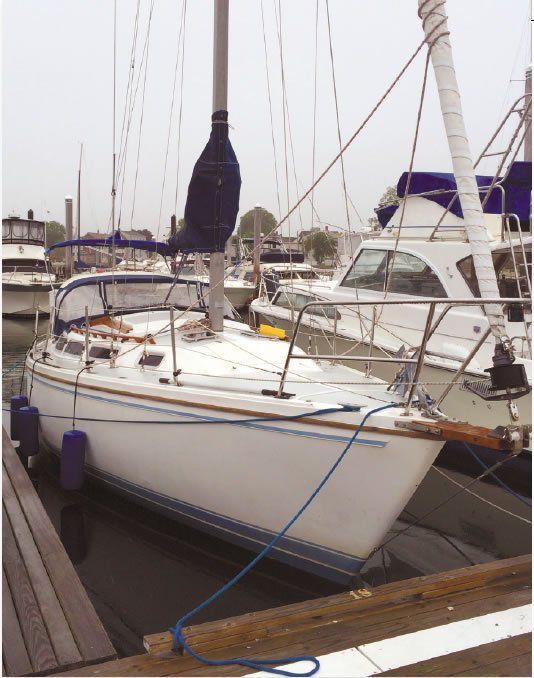 Whats Up with Synthetic Lifelines?

Its been almost five years since your original article on synthetic lifelines (Long-term test Evaluates Synthetic Lifelines, Practical Sailor, September 2012). Since my coated lifelines are due for replacement, Im curious about long-term observations. That said, I plan on going up a size or two from the recommended numbers for an extra safety margin: 6 millimeters rather than 5 millimeters. Im still looking into manufacturers and products because I just learned how easy splicing 12-strand can be, but Im pretty sure almost any of them will be better than the plastic-covered stainless-steel wire, of unknown vintage, thats on the boat now.

The lifelines in our test will be retired this year and tested for residual strength. They appear in good shape and we suspect they is still plenty of strength in them. Most manufacturers who weve spoken with suggest retiring Dyneema SK-75 (the material we are testing) after eight years, but this can vary. We would double-check this with your vendor. It is important to note that as of 2016, World Sailing (formerly ISAF) and US Sailing no longer allow fiber lifelines (vinyl-coated stainless-steel lifelines have been prohibited for years). The only acceptable material is uncoated stainless-steel (for easy inspection). From what we were told, there just wasnt enough data for safety-conscious countries in Europe to endorse fiber lifelines, and US Sailing is following World Sailings lead. Our own field tester is switching back to uncoated stainless, not because of safety concerns, but primarily because he prefers the feel of the wire-rope lifeline. One thing our tester and other readers have noted is that the Dyneema lifeline does tend to loosen over time, so be sure to use leave enough room for re-tensioning.

In your April 2017 issue of Practical Sailor (Mailport), Capt. Woody Fairley asks about safety can openers constructed of stainless steel. We can heartily recommend the Kuhn Rikon Auto Deluxe Safety Lid Lifter ($19 at Amazon). We have used ours almost daily for five years, and still is working flawlessly and looks brand new.

According to the description, the opener safely and easily removes lids, leaving a smooth edge that is suitable for resealing with a plastic lid. Lifter jaws clamp on to remove then lid and then releases into the trash with a push of a button.

Actually, we became acquainted with this brand after you recommended the Kuhn Rikon stainless-steel pressure cooker (Pressure Cookers Test, PS December 2010 online) which we also purchased at the time, and have used quite often with excellent results.

For the sake of nostalgia, you may wish to visit my page about the British Seagull outboard motors, often used in the past as auxiliary motors with sailboats, at http://learntolivebetter.org/about_us/british-seagull-a-tribute-to-a-classic/.

Thanks for the suggestion. Several other readers also recommended this tool. Anyone who has any interest in the British Marstow Seagull outboard may take some delight in Mr. Pachecos website which documents the repair and maintenance of his antique air-cooled outboard. For a time, we were under the impression that the Seagull was the outboard that John Steinbeck famously maligned in Log of the Sea of Cortez, but Pacheco correctly pointed out that the notorious Hansen Sea Cow that plagued Steinbeck and marine biologist Ed Ricketts during their cruise was the Johnson Sea Horse.

The Sea Gull, first introduced in the 1930s, is mostly relegated to museums these days, but we suspect there are more than a few owners of operating Sea Gulls among our readers who admire its simple, enduring design. Wed love to hear their views on the motor. As for the Johnson Sea Horse, perhaps there are some who might object to Steinbecks characterization?

Our Hansen Sea-Cow was not only a living thing but a mean, irritable, contemptible, vengeful, mischievous, hateful living thing…. [it] loved to ride on the back of a boat, trailing its propeller daintily in the water while we rowed . . . when attacked with a screwdriver [it] fell apart in simulated death . . . It loved no one, trusted no one, it had no friends.

When you do your upcoming dinghy testing I suggest you include the Portland Pudgy. We had one with a charter a few years ago and liked it. Its plastic so I don’t know how that resists UV compared to fiberglass. But it carried two adults and two kids, rowed decently, has decent stability, is self bailing, and can be a lifeboat. Also, you can get it with a sailing rig, not sure how well it sails. And it can take an outboard if needed. So definitely should be included in your comparison group.

We spent some time aboard a Portland Pudgy when it was first introduced and found it to be a stable, strongly built hull, but it is an inefficient rower compared to others weve tested. With any more than two people aboard and youll want an engine; two horsepower is the maximum, and a long-shaft is recommended. Featuring high freeboard, closed-cell foam flotation between the hull and floor, and several watertight compartments suitable for survival gear, it is marketed as a double-duty dinghy/lifeboat. Although thermo-molded polyethylene will generally degrade faster than fiberglass, weve seen 10-year-old Pudgies that are still in very good condition. Wed be interested in hearing from owners about their experience with the boat over the long term. Its biggest drawback as a dinghy, in our view, is its weight. Listed at 128 pounds, it is about 40 pounds heavier than a hard dinghy of about the same size. As for its abilities as a survival craft, it is worth noting that a RIB, or an inflatable boat with the same interior dimensions will have more buoyancy. Prices start at $2,700; the canopy enclosure adds another $2,000. A sailing kit adds another $1,300.

Count us in as hard core hard dinghy fanatics. Sailing and powering this Downeast coast and Nova Scotia youll find few of those nice soft sand beaches as one finds further south. So let me count the ways that a seaworthy hard shell with a sexy tumble home shape appeals to us.

Any decent hard dink will row well. Inflatables not. You do need those calories off don’t you? Try a landing in even a low surf on a rocky shore with any inflatable without holing or damaging the hull. And think about the joy of rowing under your own power in silence exploring a hidden anchorage before evening cocktails.

Sure, if you enjoy fussing with an engine, making the usual inflatable wake at full throttle, yes, blow the beast up and run with it. It will stow nicely deflated, give you that. Now the science here in the Gulf of Maine: the air is warm in summer sometimes, the water is (politely) damn cold. The inflatable is inflated, thrown over the side, then what ? The tube magically deflates. More inflating.

Our 8-foot 6-inch Puffin dinghy has been abused, scratched in many rocky landings, kedged anchors out, and carried well above its legal Coast Guard load of three adults. At low sailing speeds it tows well; try towing an inflatable at any speed. Maintenance is near nil except for cosmetics. This dink is stowed on our trawlers swim platform, launched or raised in a minute or less.

Oh yes, we do have a five horsepower outboard that is rarely used, but is there for those needed emergencies

We received a number of questions regarding our rating of the Lanocote vs. Tef-Gel in the March 2017 issue of Practical Sailor as the photo of the test panel on page 17 seemed to contradict our conclusion and the accompanying table. Heres what our tester Drew Frye, had to say:

The labels in the article are correct, but the photo (taken after the static test) is misleading. The dark business on the Tef-Gel samples was mostly dirt, with very little corrosion under it, and so in the static test it performed slightly better by a very small margin.

However, in the rotating drum washoff test, Tef-Gel allowed considerable rusting of iron and steel, and minor pitting of the aluminum, while the Lanocote did not. Thus, although Tef-Gel did slightly better in the static test, it did rather poorly in the wash-off test, worse than many grease products we reviewed in the April issue (Budget Priced Winch Grease, PS April 2017 online).

Look for our long-term report on these and other anti-seize products. Based on our initial findings, there are some expensive substitutes for Tef-Gel that will provide longer lasting corrosion in certain applications, but it is still too early to say. Stay tuned.