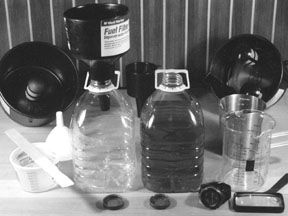 The Nov. 15, 2002 issue of Practical Sailor contained a report on 10 deck-fill fuel filters. Besides the results of tests (both visual and bench, to determine if the filters removed dirt and water), the report included three sidebars dealing with humbugs, dust, and how to keep your fuel clean. (Humbugs, which are fungi and bacteria, are the critters that live in water and feed on oil. The term humbug is an industry expression that stands for Hydrocarbon Utilizing Microorganisms and Bugs.)

After the PS report was published, several diesel engine makers, a half dozen oil industry spokesmen, and some diesel mechanics called to offer nice words about the report. Several said that if boat owners heeded those recommendations, they should never again have fuel problems—whether using diesel, gasoline, or kerosene (the filters tested work for all three).

The runner-up in the water/dirt removal testing was a widely-known filter called a Baja. The Baja is a fat, stainless steel cylindrical filter about a foot long with three screens, that comes in two sizes ($120 and $192), and is a pain to dismantle, clean and reassemble. But for years, it has been the premier filter.

The winner was a new filter from West Marine—WM-F8C. Much smaller and easier to stow than the Baja, it cost but $29 and did not need cleaning. Most importantly, the new filter passed fuel more quickly because it was designed to keep water particles away from the finger-shaped, Teflon-coated screen, which allows the fuel to flow more freely.

A month or two later, PS heard from a gentleman named Roger Patch in Chugiak, Alaska. Patch identified himself as the maker of that West Marine filter. Chugiak sounds like how Dangerous Dan McGrew might categorize that stupid beer drinking game. You can’t find Chugiak in any atlas or encyclopedia because it’s a small community north of and a municipal part of Anchorage—with the whole thing overlooked by the Chugash Mountains.

Patch’s company, Smart Tech, LLC, is situated in the Chugiak part of the Chugiak/Eagle Creek area where they have a soccer club, a Quilters Guild, and an awful lot of churches—37 of them—which is a lot for 30,000 folks; they must have a lot of fun up there. They also have a Dog Mushers Association, something called ABATE (which stands for “Alaska Bikers Against Totalitarian Enactments,” and you’d better not fool with them), and a very active chamber of commerce—from whom PS probably will hear very shortly because 22% of those 30,000 folks work for the government and likely have lots of time to write peevish letters, if so moved.

Patch told us that he now has four sizes of filters, all made of black polypropylene that is conductive (by including carbon in the plastic, the funnels conduct electricity so that they can thus be grounded to dissipate the static electricity that is generated when fueling). He offered to send a set to PS, to test for their rated gallons per minute. GPM is important because most filters pass fuel so slowly that fuel dock personnel—as well as boat owners themselves—often grow irritated while filling up. PS agreed to check the GPM.

Patch, who developed the Teflon-coated, stainless steel filter element in conjunction with the Racor Division of the Parker Hannifin Corporation, sent them promptly, and PS set up the workbench.

From a gallon of new diesel fuel, one cupful was removed and replaced with water. That’s more than 6% water; you’d probably never accumulate that much in your tank, unless you left the fill cap off during an all-day rain.

That oil/water solution was poured several times through each of the five filters, checking the time required with the stopwatch mode of an extremely accurate Suunto Mariner (Model 4789), which reads in tenths of a second. The water removed was measured carefully to see if one honest cup of water was removed each time. The fuel also was examined visually. (Unless continuously agitated, water settles out of fuel in very little time.) Patch’s Smart Tech literature claims that the filters remove 100% of any water.

Because the filters did almost exactly as claimed, the fuel-water solution had only to be recombined and vigorously mixed for each cycle of the test. During the testing, only a half dozen drops of fuel or water were lost through spillage, certainly not nearly enough to affect the results.

The figures in the accompanying chart, which also displays the sizes and West Marine prices, contain the results, with a column of extrapolated GPM numbers to compare with the rated figures.

Patch added that these filters should last about 10 years, without a speck of maintenance.

As for GPM, those locals up there in Chugiak are honest.