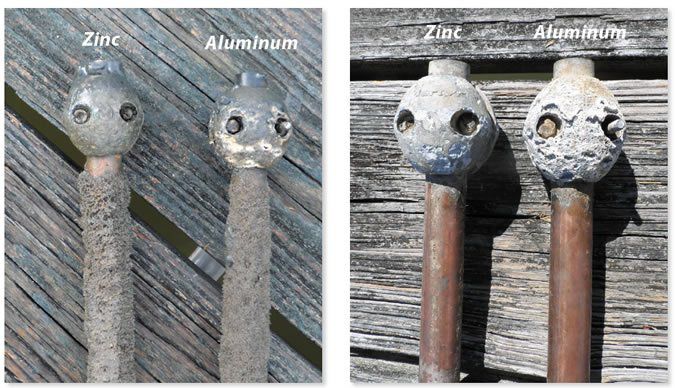 A year from now, Practical Sailor will be reporting on sacrificial anodes, both zinc and aluminum, and how they performed in the salt waters of south Florida and the brackish waters of Chesapeake Bay. Sacrificial anodes are used to protect a sailboats exterior components from galvanic corrosion, a process during which more noble, cathodic metals like stainless steel cause less noble, anodic metals like aluminum to be eaten away by corrosion as they lose electrons.

The process can occur anywhere that there is a galvanic circuit between the two dissimilar metals. It is greatly accelerated in the presence of salt water. As the name implies, the anodes, which are made of less noble metals like aluminum or zinc, sacrifice themselves to protect the least noble metal in the galvanic circuit.

Engine-cooling systems, sail drives, and prop-shafts are the most common applications where anodes are used on sailboats. Dinghy outboards also require anodes. Because the anodes are eaten away in the process, boat owners must replace them on a regular basis, usually when the anodes mass is reduced to one-half of its original size.

Sacrificial anodes are relatively inexpensive, but the consequences of corrosion resulting from an ineffective or failed anode can be serious. More than one boat has sunk on its mooring due to a through-hull failure caused by galvanic corrosion.

PS often performs mini-tests before setting up for long-term testing; it allows us to adjust the severity of test conditions to ensure that there will be measurable differences and that the test protocol is reasonable. Often, preliminary results show trends and are worth sharing before our findings are complete.

The anode pre-test was carried out in Chesapeake Bay, ran for three summer months, and consisted of prop-shaft zincs clamped to copper pipe and suspended about two feet below the brackish waters surface. We chose copper because it is the copper in bronze that initiates current flow, and using it will accelerate failure.

On the other hand, aluminum anodes seem to attract more growth, perhaps because better corrosion protection means fewer copper ions in the water or perhaps because of hydrogen gas generated at the cathode. Whatever the cause, within just three weeks, we saw more soft growth on the aluminum-protected copper pipe as compared to the zinc-protected copper pipe (same brand and size anode).

What does all of this mean? Stay tuned. In a year, we will be reporting on nearly 20 samples. Meanwhile, we suggest following the conventional wisdom: Check your anodes at least quarterly and replace them yearly, or when less than half the anode remains. Avoid overprotecting; too much zinc can cause problems, especially on wooden boats. Pencil zincs protecting engine heat-exchangers must meet makers specs. For props: In general, anode manufacturers recommend zinc in salt water, aluminum in brackish water, and magnesium in fresh water. In our recent survey, the only boats with serious damage had no anodes at all.