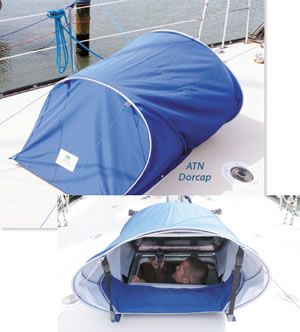 Were just as addicted to being on the water as anyone, but like many of our readers, we also dabble in other activities. For some, sailing is a pathway to their another big passion: travel, exploration, diving, surfing, or simply finding those rare corners of the planet that are truly quiet. For this reason, any product thats useful for one or more of these activities tend to get our attention. Here are some that weve been tinkering with since last autumn, when they first arrived on our desk.

LEDs have virtually revolutionized the world of battery-operated lights, as we saw in our recent tests of LED spotlights (see PS January 2012 online) and flashlights (see PS January 2007 online). New and more-powerful LED bulbs are being developed each year, and battery technology is also progressing. A good example of how quickly the playing field is shifting is illustrated with the new light from Pelican, an innovative company best known for producing the worlds toughest waterproof cases (see PS April 2002 online).

The Pelican 3310 flashlight is the successor to the Pelican 2410, which was our top-rated flashlight in the 2007 test. Since then, Pelican has added photoluminescence (glow-in-the-dark) as an option for several of its lights, including the 2410; this is a handy feature when youre trying to locate the flashlight in a suddenly dark cabin.

Like the 2410, the 3310 is made of rugged, impact-resistant plastic and is waterproof and submersible. Its most noticeable design element is the battery cover, which is on the rear of the housing, instead of the front. It requires a key (attached to its lanyard) or small screwdriver to open.

The 3310 uses just three AA batteries, yet emits a brighter light on the high setting for longer than the 2410, which uses four AA batteries.

Although our testers werent excited by the added complexity to open the battery compartment, the feature ensured that the compartment was well sealed. Other sensible design details like a three-way, quick-touch switch (low, bright, flashing), and an ergonomic, no-roll design shows Pelican has done its homework.

We ran the flashlight through the same series of tests for brightness, beam quality, waterproofing, and impact resistance as we did the 2007 test lights and compared the glow-in-the-dark performance to glow tape from Glowfast (www.glowfast.com). In a nutshell, the 3310 blew the old-school lights away.

Bottom line: If glow-in-the-dark is what attracts you, then just slap some tape on your old light. The real value in the Pelican 3310 is whats inside. For $40 suggested retail, this waterproof light is about as good as it gets.

In our neck of the waterway, owners of moored sailboats quickly learn that the required all-around light at the masthead doesn’t offer the best protection against people who bomb through the anchorage at night. Squishable to about a half-inch, the inflatable, solar-powered Luci Light from MPowerd seemed like just the thing to hang on our backstay or boom to ward off collisions without sucking precious battery power.

After a day of hanging in the sun, the light burned through the night at low power, which was enough to light up the stern; at high power, it provided enough cockpit light to read and play cards. It didnt last all night at high power. But the beach-ball plastic case makes us wonder just how long it would last as a semi-permanent fixture for moored boats.

Bottom line: MPowerd is on to something here, with its collapsible, solar-powered design. As it is, the easily stowed and portable Luci Light ($15) is fine for a cockpit light and camping, but wed like to see a more rugged version for marine use.

Weve tried out a variety of drybags in recent years, but none that compare to the Sea to Summit Flow 35L Drypack. The closest we can think of is the Crossbreed 1500 from Seattle Sports (see PS, October 2005 online). Based in Australia, Sea to Summit specializes in lightweight outdoor equipment for backpacking, camping, and paddling. The ruggedly built Flow fits the bill for all three activities. With a padded (closed-cell foam) hip-belt and stiffened back support, the pack has enough cushion for multi-day adventurers who have learned to travel light. Our test pack faithfully lugged a tent, sleeping bag, food, and cooking kit on a three-day trek through Olympic National Park in Washington.

Every component on the pack, from the buckles to zippers, is well-engineered to resist corrosion and daily wear. We found it online for $200. Smaller models lacking the padded hip belt are more widely available.

Bottom line: This well-made pack is one of the most versatile weve tested and neatly fits the boat-based explorers needs. Paddlers may want to check out Sea to Summits pack/dry bags with removable shoulder straps.

Our last test of sunglasses (see PS, July 2009 online) found that some styles of frames and lenses were better suited for specific tasks like reading water depth on overcast days. Immediately after that article was published, we were flooded with questions about bifocal sunglasses and photochromatic (self-darkening/lightening) lenses. When Australian eyewear company BarZ Optics launched what it claimed was the first photochromatic, floating bifocals, we were intrigued.

We tested the BarZ Tofino (the amber acetate lens model), and the Floater (grey, polycarbonate, photochromatic lens) for basic optical characteristics: light transmission and UV protection. We also compared them in the field to the top picks in our last test. The Tofino ($73) has a common acetate lens with a non-polarized magnification oval inset at the bottom of the lens. This bifocal lens eliminates the black-out that occurs when viewing some chartplotters or electronic devices from an angle through polarized lenses. The Floater ($198) has a photochromatic lens; the magnified segment is at the bottom of the lens and is polarized. The Floaters are not immune to blackout, but the photochromatic effect and bifocal inserts helped make reading our electronics easy. The Floaters were handy during harbor approaches that involved watching depth, checking the plotter, and ducking below for a chart or guide book. For extended time in bright sun, we reached for our favorite pair, which were better at cutting glare.

Bottom line: The Tofinos didnt excite us more than other acetate bifocals, but the versatility of the Floaters convinced that we needed bifocal shades. Fit is especially important for bifocals, so some users may be better served by a local optometrist.

Any tropical sailor can appreciate the ATN Dorcaps mission: increase air flow down below and stay dry when a squall rolls through. Supported by a wire-formed hoop, the Dorcap requires no extra hardware to install. Available in small, medium, and large hatch sizes it easily slips over the hatch. Guys at the corners help it hold its shape and keep it in place, and a buckle/clip assembly lets you narrow the gap in the dorade-like opening with a tug from below.

Ruggedly constructed of Sunbrella, the Dorcap shrugged off a 25-knot squall during our test in the Florida Keys. Throughout the late summer heat and squalls, it kept the V-berth cool and dry. A high-aspect windscoop will funnel more air (especially at the dock) and stores more easily, but the Dorcap pays off on rainy nights on the hook.

Bottom line: At $300, the Dorcap isn’t cheap, but it should last at least 10 years. For tropical sailors who value their sleep and have the space to store it, its a winner.