For years, safety advocates have touted the use of a four-part block and tackle attached to the end of the boom as the hoist of choice. It affords a great dockside demo, but put to use in a rolling seaway, a crew quickly notes that boat motion causes the boom to flail about and the hurriedly dropped mainsail further complicates using the boom as a hoisting tool.

The lack of a topping lift and the result of overloading a rigid vang can cause the outboard end of the boom to dip so low that the hoisting tackle is chock-a-block before the victim can clear the rail. Adding a preventer and setting up the mainsail halyard as a makeshift topping lift will help tame the boom, but theres a far more efficient way to hoist a victim out of the water. All it takes is a spinnaker halyard and a two-speed self-tailing winch. It gets even more useful if you add a 10-foot pennant with a spliced eye and a small diameter, jawed, heavy duty, latching-type snap shackle.

Adding the rescue pennant increases the reach of the spinnaker halyard and allows a rescuer to clip onto a victims harness, Lifesling or tether. Theres an extra value provided by this approach. The small-jawed snap shackle will trap a laterally loaded and twisted free tether clip (see adjacent photo). Plus, its easy to set up by a rescuer rather than needing the victim to secure the halyard.

For example, in the CV30 incident, Simon Speirs was dragged alongside the big sloop for five minutes while those on the foredeck were unable to haul him back aboard. The bowman had the right idea when he went for a spinnaker halyard. Unfortunately, Speirs’s webbing attachment point on his inflatable PFD was pulled taut and was so hard to access that Spiers was unable to clip on the halyard. To expect a victim being dragged in the water to make this connection-whether or not the tether is taut-is bound to fail.

In the CV30 situation, the fouled, laterally loaded jackline clip failure may still have occurred. But the victim would have remained attached to the boat via the small diameter, robustly built, snap shackle (Tylaska T-12 pictured). Such a heavy duty snap shackle would have prevented the damaged tether clip from slipping through its latched jaws. This would result in ongoing attachment to the boat and a means of lifting the person back aboard. It does not require the PIW to clip themselves on and it prevents a laterally loaded, failed tether clip, from releasing the victim.

No technique is perfect, and when employing a halyard recovery, especially in a significant seaway, its important to keep the victim from becoming an active pendulum. They can be accelerated by pitch, roll and yaw and their three cousins surge, heave, and sway.

The best way to accomplish this is with another crew using a short line to keep the victim from swinging as the rig gyrates in the seaway. Ideally, theres enough crew to handle the vessel and still have at least two people available to cope with the halyard connection and winching up the victim.

The double handing crew that loses a person overboard becomes a single hander and faces a major challenge when it comes to the recovery maneuver and getting the victim back aboard. The Lifesling, or a similar device, is their best friend, because it provides a streamlined means of making contact with the victim, adds extra floatation and is keeps the PIW connected to the boat ready to be hoisted from the water. 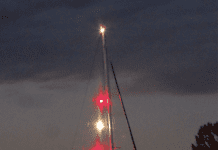 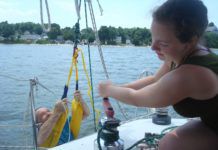