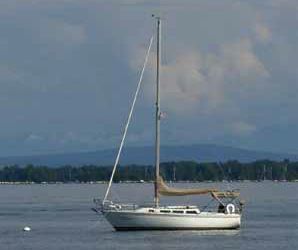 For 20-plus years, I have removed my mooring buoy from the water at the end of the sailing season on Lake Champlain. This year, however, I was surprised to find that my mooring chain was totally covered by zebra mussels. The 3/8-inch chain was about 3 inches thick with mussels when I hauled it up! Do the zebra mussels affect the chain strength or its life expectancy?

In addition to weighing down your mooring chain-possibly enough to sink the float below the surface-and making the chain inflexible and hard to haul, a really bad infestation of the invasive freshwater zebra mussels actually can weaken the chain itself, in a round-about way. According to the U.S. Army Corps of Engineers, When a thick layer of zebra mussels covers a metallic surface, it can cause anoxia [oxygen depletion] and pH reduction, exacerbating corrosion rates.

The Corps also noted that zebra mussels tend to take up residence at the upper section of the chain, which our pasts tests (PS, September 2006 and July 2007) have found to be the most vulnerable to corrosion.

We also found that a mooring chain can corrode to a point of uselessness in a fairly short time (a season or two, depending on chain material). So, if you want your mooring rig to last, its essential that you address the mussel problem quickly.

To minimize chain corrosion, we recommend hacking off the clustered zebra mussels regularly-every few months, if possible. Because they typically attach to the chain closest to the waters surface, you shouldnt have to dive down very far to do this. Drying out the fouling before scraping it off will make the cleaning easier, so if your mooring allows, pull the infested part of the chain out of the water and leave it to dry in the sun. Then get to scrubbing and scraping-a putty knife would be a good tool for this job. Once youve cleaned off the muck and mussels, inspect the chain links and other mooring components thoroughly.

If you can’t haul the entire mooring rig-which you should do once a year any way-including the mushroom, at least inspect the upper chain and the swivel well. Pay extra close attention to the area where the mussels had been attached. Theres no set rule for when you should replace weathered mooring chain, but if the links are corroded in spots close to half their original diameter, then its a good bet that by next season, youre going to be in trouble.

Were not aware of any test data on ways to prevent the mussels from attaching to a boats mooring chain. A good antifoulant may keep them at bay, but were skeptical that any would stay adhered to chain given the movement the upper section of a mooring system sees. Silicone or zinc sprays like Pettits 1792 Barnacle Barrier that are designed to protect propellers and outdrives could help. According to Pettit parent company Kop-Coat, Barnacle Barrier should provide at least a seasons worth of protection against the hard fouling, and because it has good impact resistance, it should stay on the chain better than other coatings.