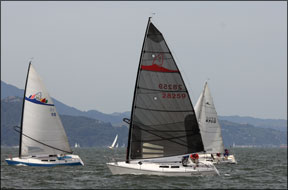 I think the Wyliecat 30 would be a great boat review for Practical Sailor. From my perspective of having owned a number of larger and smaller boats, it’s an ideal boat: simple, easy to rig, fast and fun to sail. Wyliecat 30’s do very well racing in all conditions—from practically no wind to a gale. My fiancée and I race Dazzler, a WC 30, doublehanded on San Francisco Bay and have a lot of fun together.

Tom Wylie’s designs have a loyal following and practical appeal, and your Dazzler offers a good example of why. Longtime readers will remember that contributing editor Skip Allan’s boat was a Wylie design. PS tries to review boats that have widespread appeal. We have heard from boatowners and PS contributors that the WC is fast and easy to sail, something everyone can appreciate. We’ll definitely check into the Wyliecat for a future review.

In the January 2010 article about man-overboard safety, you did not touch on perhaps the hardest part of MOB instances: recovery. The article cited many reasons locating and approaching the MOB could be difficult, and those same issues are multiplied while trying to get an MOB back onboard. The article assumed the MOB was uninjured, alert, and physically capable. I believe this will not be the typical case.

Use of a swim platform or ladder should only be considered in the calmest of conditions.

In many online discussions, the consensus is to get the MOB alongside the boat at the point of least movement and attach a lifting device of some type. Reaching down the topsides will be difficult even for tall crew. Practice scenarios should begin with a worst-case scenario: man overboard and a small woman bringing him back aboard—or worse: getting yourself back on board unassisted.

PS has covered retrieval devices and methods in past issues, including April 2007 and January 2006. We also reported on the 2005 Crew Overboard Rescue Symposium held in San Francisco in the August and November 2005 issues. In this issue, we review the SeaScoopa, a retrieval device that is deployed using a halyard and that literally “scoops” up the MOB. It addresses your concerns of smaller crew trying to heft unconscious victims back onboard as the net and halyard do all the lifting. To test this, our “victim” played the part of an unconscious MOB.

After experiencing the 2009 Samoan earthquake/tsunami and the more recent scare in Hilo, Amanda and I devised an Earthquake and Tsunami Response system for cruisers. We will be including it in the Mahina Expeditions Handbook in 2011, and thought your readers may want to read it as well. (Mahina Expeditions is an offshore passagemaking school that has trained over 800 students in more than 17 years, covering close to 200,000 miles.)

When we experienced the 2009 earthquake in Apia, Samoa, the alarm sounded approximately 12 minutes later. Already, the water was rapidly receding from Apia Marina where we were moored. At the instant the sirens went off, the tsunami was already coming ashore on the south side of the island in a series of waves that would claim over 130 lives.

As sailors, we need to be aware of the ever-present threat of a tsunami. By establishing emergency procedures for your crew and vessel, along with knowing what to expect and do in the event of a tsunami, it will be far less likely that you and your crew will become casualties or that your vessel will sustain damage.

In regards to the beverage holder article in the April 2010: I’ve used a Sail-a-long since 1993. No signs of corrosion.

And as for the end of article reminder that alcohol impairment can incur legal penalties, of more importance is that the impaired judgment resulting from imbibing can result in property damage, injury, and even death.

As an ambulance crew member and a firefighter, I’ve seen too much of the latter.

The Cape Dory 25 resurrection covered in the March issue gives me great encouragement to take on a much-needed refurbishment of my 1979 Southern Cross 31. More mysterious to me than the carpentry involved is the treatment of the inner hull and headliner. In the “before” and “after” photos of the forward part of the boat (photos 1 and 2), the white surfaces seem much whiter in the after photo. Is this difference because of lighting conditions or have the white surfaces been treated in some way?

Believe or not, all it took to get the interior/headliner back to bright white was a good scrubbing with a bleach-water solution. The solution gets surfaces clean and also hampers mildew growth. For serious mildew problems, you could try mildew remover/inhibitor like Klean Strip or Spray Nine Multipurpose Cleaner and Disinfectant, which did well in our January 2009 test. An upcoming test in PS will look at products like Concrobium that claim to keep mildew at bay.

Another option for cleaning a grimy cabin is using borax soap and water, which other readers have said gets the same clean as bleach and repels insects without the harshness.

If a good scrub doesn’t get the result you want, you can always paint. Interlux recently introduced Interior Finish 750, which we’ll be testing in the near future, while PS Editor Darrell Nicholson used hardware-store white enamel with a smidgen of blue tint to brighten the interior wood on his former boat, an old Atkin ketch.

Your March 2010 article on cleats covered a lot of territory. I have found that the distance between a hawse pipe or chock and the cleat is of importance. The greater the distance, the more the line is subject to chafe. A cleat on the toerail requires no chafe protection, whereas the setup shown in your photos of Manitou and Palawan show a lot of line between the fairlead and the securing point. This line is subject to stretch, which means that it can saw back and forth in the chock. Chafe protection is required at the fairleads and it must be frequently checked and replaced, hopefully before the storm comes.

In regards to your review of Island Moorings’ Deluxe Pickup Stick (April 2010): When sailing alone on my Ericson 34, picking up the mooring with a boat hook used to take up to a dozen tries because the wind or waves would blow the bow off before I could get to the bow with the hook. With the Deluxe Pickup Stick, there’s no need for a hook, and having to make a second approach is infrequent.

I sprang for an Island Moorings pickup stick the day after I spent an hour trying to fish a bunch of fiberglass splinters out of my hand from my 3 year old standard pickup stick!

Also, attached is a photo of a cleat toe block I made a few years ago to solve the snagged sheet problem a reader mentioned in the April 2010 Mailport. I was surprised at the time there did not seem to be anything on the market, but considering the Doyle Sails set sells for $85, I would still opt to make them.

Upon doing what little research I could on the subject, I found conflicting opinions. Group 1 says: “You need to ground most of the metallic stuff on your boat with a bunch of bonding straps to save your bacon and your electronic equipment, if the boat takes a hit.” Group 2 says: “You’re all daft. Grounding the boat, especially the mast and rigging, places it at the same electrical potential as the water it’s sitting in, and you’re actually inviting lightning aboard by making it part of the circuit. The boat will be far less likely to attract a hit if you make it as electrically neutral with respect to the surrounding water as possible.”

If the jury is still out at Practical Sailor on this, I don’t blame you.

We’ve looked at lightning (April 1, 1995), lightning protection (June 1, 1994), and lightning dissipating devices (July 15, 1995) in previous articles. Our best advice is to follow the practices recommended by the American Boat and Yacht Council (ABYC, www.abycinc.org) for lightning protection and grounding. Installing a static discharge device won’t hurt, and when you’re in a lightning storm, it’s good practice to keep crew away from shrouds and the mast. Also, refrain from using electrical equipment, if you can, or disconnect the equipment. In the end, if Thor decides your masthead is his target, there’s not much you can do to dissuade him, and no matter how elaborate your protection system, there’s no guarantee your boat won’t be damaged.

I have owned my custom 37-foot full-keel sailboat for 25 years. Last spring, I decided to experiment with a new type of bottom paint made by Durall (www.boat-bottom-paint.com). I purchased 10 quarts of the Smooth Sailing Antifouling for a total of $516.58. For years, I had been using Interlux’s VC17/Offshore with good results. The Durall paint was compatible with the Teflon-based VC17, similar in preparation and application, and less expensive.

After application, the boat was in the water for a couple of weeks before I finally took it out. I felt the drag immediately. As soon as we landed, I checked the bottom. It was infested with “sea-squirt,” a common growth I had never before seen on MY boat bottom! They had taken over the entire underwater hull. I spent a long time diving, cleaning, and cursing that afternoon—and the rest of the summer.

I have been in communication with Durall since November 2009, seeking a complete refund. Four sailing months of scraping hull growth, followed by four months of trying to get a refund is going to equal one slow bottom job!

Practical Sailor contacted Harvey Chichester at Durall-Smooth Sailing about your concerns. According to Chichester, no bottom paint has been proven effective against certain species of invasive tunicates / sea squirts. He responded: “Smooth Sailing is working with the Woods Hole Marine Institute with test samples of a new coating, which we hope, will prove effective against this new marine problem…We have not made a refund to our customer at this point, pending more data on this new threat.

“Our product uses high levels of copper to repel organisms, including biocides and the use of Teflon to provide a non stick surface which allows most organisms to slide off at speeds of 12 to 15 knots. But we do not guarantee that no growths will persist, and make no such claims, especially with regard to new invasive species.”

According to antifouling maker Interlux, tunicates have been a problem in the U.S. for decades. A 1977 Interlux product manual even addresses it: The tunicate’s “larva resemble minute tadpoles and possess a faint semblance of a backbone. When attached to the bottom of a boat, they offer an extreme amount of drag resistance.”

We plan to add Durall-Smooth Sailing’s paint formulas to our test lineup, so stay tuned to see how these paints fare against tried-and-true products.