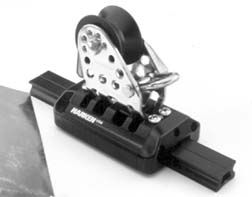 Harken’s quest for the lightest, easiest-running yacht blocks never ends. Harken makes a huge line of blocks, from tiny “Micro Blocks” with 22 mm (7/8″) sheaves for up to 1/4″ line to 150 mm (6″) blocks with safe working loads of 15,000 lbs. The Micro Blocks alone come in 16 configurations—from singles to triples with a becket and a cam cleat.

The Pewaukee company, greatly favored by weight-conscious racing sailors but also admired by cruisers, has some more new ones. Among them are a new tri-roller car for handling several sheets; a new 40-mm cheek block that Harken says is 30% lighter and 60% stronger; new dinghy jib leads; a special outhaul car for mainsails that furl in the mast or behind it, and an entirely new line of lower-priced blocks called ESP (an acronym for elegant simple product) that do NOT have ball bearings.

The ones that took our eye were some new fixed furling lead blocks that can be mounted upright or sideways inside a toe rail. These compact low-profile blocks, made with a one-piece stainless steel frame and carbon-fiber sheaves, come in two sizes. The small one, with ball bearings, has a SWL (safe working load) of 300 lbs. and lists for $7.95. A large one, with roller bearings, has a SWL of 500 lbs. and lists for $25.95.

By the way, in the September, 1999 issue some Harken blocks introduced last summer were discussed. We called them all Black Magic Carbo AirBlocks™.

Harken was nice. They didn’t squawk.

The error was discovered when consulting the discount catalogs on some more new Harken blocks.

Harken’s big boys are called Black Magic Airblocks. There are two sizes—57 mm and 75 mm. Machined from high-grade aluminum that is hard anodized (with added UV protection and Teflon impregnation), these blocks have Torlon roller bearings, carbon balls and deeply grooved sheaves. They are available as singles (with or without beckets), doubles, footblocks, strapheads or what Harken calls a “spriddle” (for use as a spreacher). A bit dear, they run from $78 to $372.