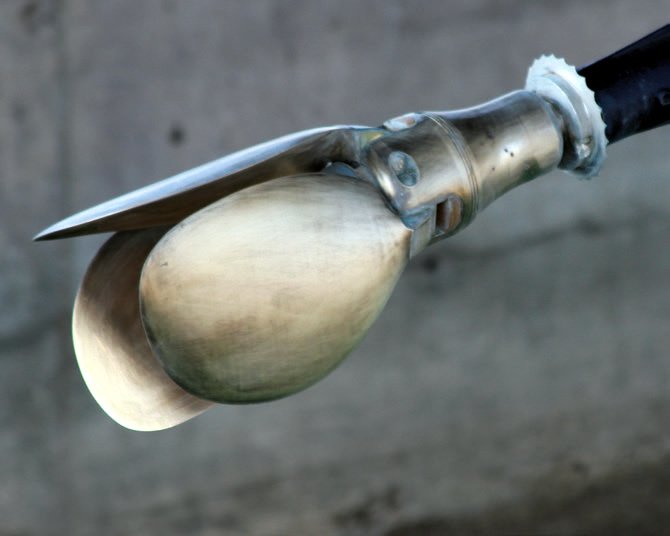 For the past 40 years we’ve sailed an average of 10,000 miles annually between Australia, Alaska, Antarctica and Spitsbergen motoring or motorsailing between 400 and 600 hours, depending on the area – more hours in high latitudes of Antarctica and the Arctic, fewer in the tropical trade winds.

Our HR 42 came with a fixed three-blade prop which served us well when pushing bergy bits out of the way in Patagonia, Antarctica and Alaska, but obviously slowed us down in light airs. When we had our current Hallberg-Rassy 46 built in 1996, anticipating better sailing performance, we opted to install a Max-Prop as that was acknowledged as the best option at that time.

Max-Prop has been around since the early 70s and is a proven design, but after 18 years and 190,000 miles of use, we had the prop rebuilt three times, each time costing between $800 and $1,200. The first time the prop was rebuilt by Henleys, an Auckland prop shop, and the other two times by PYI, the U.S. importer/distributor located near Seattle. I was told that the rebuild included brazing more bronze on to the props inside working surfaces followed by machining the built-up surfaces down to original tolerances. When I enquired what I could do to extend the period of time between rebuilds, PYI said, More grease! So for 15 years, we not only greased the prop before launching at the start of our season, but also mid-season going underwater with mask, fins and grease gun to do so.

The advantages of the Max-Prop are very little drag when sailing as the prop instantly feathers unless the engine is engaged, no freewheeling in neutral, adjustable pitch, and incredible stopping power in reverse. Max-Prop can literally bring a boat from 6 knots to a dead stop in a boat length. This feature has kept us from nailing coral heads at least twice. The ability to adjust the pitch to maximum engine efficiency improves fuel economy and the newer Easy model Max-Props can be adjusted in the water without having to disassemble and reassemble the propeller, which is a substantial improvement over the earlier Classic version. We did encounter (and frequently use to our advantage) fairly substantial propwalk.

The disadvantages are that when the Max-Props feathers, the blades are still open and prone to fouling lines and kelp. During our 2008 Atlantic crossing we had to get in the water with mask and fins three times to remove cargo nets and large 3-inch floating lines from the prop. The Atlantic Ocean has a garbage gyre similar to, but smaller than the Pacific Garbage Patch, and we must have found the edge of it during our 2008 crossing. Last month, we completed the identical route from the Canary Islands to Antigua with only one sighting of trash and favorable winds that allowed us to basically sail the rhumbline. As a funny side note we were once making landfall at Fastnet Rock when a smaller boat passed us under sail. Trim as we might, we couldn't catch them and only when they were several boat lengths ahead did Amanda think to check astern only to discover a fat turquoise rope trailing behind. The rope, obviously was not ours, was caught on the prop and we wondered how long it had been there as wed not used the motor for several days.

During a 2015-2016 winter refit in Sweden, after reading the results of two European propeller efficiency tests and after speaking with several owners who had switched from Max-Prop to Flexofold, I had a Flexofold prop installed. Jack Skrydstrup, Flexofolds Danish manufacturer recommended the size and pitch, and the boatyard installed it without problems.

In comparison the stopping power is not nearly as good as with the Max-Prop, and the prop freewheels when the engine is shut down in neutral. Weve found that shutting down in slow forward solves the freewheeling issue. Strong on the Flexofolds plus side are blades that feather aft, instead of extended, so theyre less likely to snag lines or kelp. We notice almost no propwalk in reverse. In addition, cost of ownership is reduced as there doesn’t appear to be a need to rebuild and there are considerably fewer spare parts to carry.

However, the improvements in efficiency are difficult to quantify as we also repowered at the same time, switching from a 95 hp. to 75 hp. engine, but our top speed rose 0.7 knots, and fuel consumption on an identical Atlantic crossing dropped from 1.33 gph to .83 gph.

On the service side, PYI, the U.S. importer/distributor of Max-Prop is renowned for their customer service, doing a superb job of shipping spare parts immediately and quickly handling rebuilds from their shop near Seattle. Flexofolds Jack Skrydstrup is helpful, and ships quickly, although shipping is factory-direct from Denmark. Ive only heard one incident of an owner needing parts during European summer vacation period when shipping was delayed slightly.

All Propellers, Litres Per Hour vs Boat Speed

Nigel Calder, author of The Boatowners Mechanical and Electrical Manual shared propeller data collected during the course of his recent hybrid propulsion experiments. Here’s his summary: “We tested Flexofold, three Goris, two Volvo-Penta four–blade folding props, three Brunton Autoprops, a Brunton Varifold, and a fixed pitch, which was undersized so not a fair comparison – it just happened to be available. The objective of these tests was to collect baseline data for other purposes. As such, the propellers were not necessarily properly matched to the boat and these are not apples-to-apples comparisons. Nevertheless, it is possible to draw some conclusions. The Flexofold, Volvo-Pentas and Varifold had similar efficiencies, but from an engineering perspective the Flexofold was the simplest design and easiest to fit and thus our favorite.