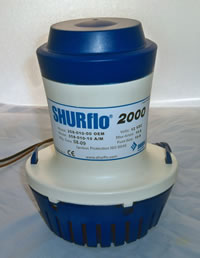 Practical Sailor spent much of the last 12 months testing marine-systems products—flushing toilets loaded with faux poo and cycling bilge pumps till they would pump no more. So it was no surprise to us that the bulk of our top gear picks for the year were systems related. PS tapped three marine heads—Raritan’s Marine Elegance, Planus’ Artic Standard, and Dometic/Sealand’s SailVac—and two Shurflo electric bilge pumps for the 2011 Gear of the Year (GOTY) list.

Once considered a frivolous onboard luxury, electric heads are now more compact, more reliable, and less expensive than their predecessors. And retrofitting a boat that has a manual head is not beyond the capabilities of a competent do-it-yourselfer.

We selected 14 test toilets that represented a good cross-section of what’s available from major manufacturers. Testers broke the field down into two groups based on toilet size. We reported on seven “deluxe” electric-flush heads (comparable to those found in residential bathrooms) in the March 2011 issue, and seven, more compact, and less expensive toilets were reviewed in the February 2011 issue.

We evaluated ease of electrical and plumbing hookup, noted maintenance issues, and compared functions. We tested for amp draw, noise level, and ease of use. Using equal batches of “faux poo”—one banana, 4 feet of West Marine single-ply tissue paper, and 1 cup of dyed water—we tested the amount, speed, and efficiency of rinse-water input and waste discharge.

The Raritan Marine Elegance (220AHF01202) topped the field of compact, electric-flush toilets, and the Planus Artic Standard (90450) was testers’ top pick among the deluxe electric heads.

The Raritan is a heavy-duty toilet that has a large bowl and a full-size seat, but its 12-inch footprint puts it in the compact category. Our 39-pound test toilet was set up for pressurized freshwater supply with a solenoid valve to control flow, but it can be configured to operate with a separate supply pump. All components are first-class and tucked nicely under the bowl.

Testers found hookup and installation to be easy, and the function was fast, efficient, and quieter than most. The $630 Marine Elegance is a good compromise for someone who wants the comforts of a home toilet, but is limited by space.

Boat owners looking for a deluxe throne should consider the Planus Artic Standard. Manufactured in Italy and sold through Scandvik Inc. in Vero Beach, Fla., the $1,200 Planus was our price-is-no-object Best Choice. It has more oomph than the small-boat owner will likely need (or want to pay for), but this quiet, powerful, clean flusher was the cream of the crop.

At 54 pounds, the Artic is quite heavy, but it has above-average construction and came with a pre-wired harness that connected to a sealed electronic box with a pushbutton. It included a heavy-duty bronze inlet pipe with a large solenoid and backflow preventer. The heart of the system is its high-speed Vortex discharge pump that Planus claims will push liquid up to 29-feet high. All of its components are heavy duty, and its operation was very impressive and efficient. It was also the quietest in the test group.

Testers used the same test protocol to test vacuum-flush toilets as we did the electric toilets. We reviewed two electric vacuum-flush units from Dometic Corp. (Sealand) and a manual unit from Blakes Lavac Taylors in the August 2011 issue. Dometic’s SailVac VHT 5200 was testers’ favorite in this group of water misers, earning it a spot on the Gear of the Year list.

The SailVac VHT 5200 is an integral vacuum generator and 14-gallon holding tank. It can be used with any of the company’s VacuFlush toilets, but we tested it with the 5148 model. The heavy-duty polyethylene composite tank is specifically shaped to install vertically in the outboard bulkhead space in a head. It is exactly the same size as Sealand tanks already found on some production boats.

The SailVac tank measures 36 inches high, 20 inches wide, 11 inches deep at the top and 5 inches deep at the bottom. Sealand claims it has enough holding capacity for two people for four days; we found this to be an accurate—if not conservative—statement. It comes pre-wired with a 12-volt, 3-amp motor, a vacuum pump, internal vacuum switch, and a tank sensor. There are also relays for an alarm and auto shutdown.

The top of the tank has a discharge fitting exiting the air pump to evacuate foul odors while the air pump creates a vacuum. There is no vent. The vacuum pump is quiet and its integrated vacuum generator/holding tank design simplified installation, but it takes longer for the system to reach a full vacuum than other products tested.

The $1,772 SailVac will appeal to owners of boats already fitted with vertically oriented holding tanks of roughly the same dimensions who are looking for a water-saving electric head. The SailVac used only 2 pints of water during test flushes.

The bilge pump market is crowded with everything from inexpensive hand pumps to high-capacity electric pumps, and we’ve tested many over the past few decades. This year, we took a look at 18 electric pumps from Attwood Marine Products, Rule/ITT Corp., Shurflo, and Johnson Pump. We broke the test field into groups by capacity: Pumps rated for 1,600 gallons per hour (GPH) or more were reviewed in the September 2010 issue, and those rated for 1,500 GPH or less were evaluated in the October 2010 issue.

All faced the same bench tests: Testers measured flow rates and power ratings at two voltages while pumping fresh water into a tank set 4 feet above the pump. We also conducted dry-run tests to confirm compliance with American Boat and Yacht Council standards. In the final analysis, we picked the top-rated pump based on performance, warranty, wiring, and price.

Interestingly, bilge pumps from Shurflo topped both test groups to grab spots on the GOTY line-up. Testers liked the quality of construction and “heft” of the $90 Shurflo 2000 (358-010-00), which was one of the heaviest pumps its size. We also liked the unique 360-degree swivel mounting option, the 60-inch leads, and the 2,000-GPH pump’s leader-of-the-pack pumping capacity. While it drew a considerable amount of power compared to other pumps, it also delivered in terms of water moved.

Likewise, the Shurflo 1500 (358-000-00) topped its group in pumping capacity, clearing 10 gallons in 26 seconds, featured the 360-degree swivel mount, and was the heaviest pump in its group (4 pounds, 14.5 ounces). But it also required about double the amount of power of the other tests pumps.

Based on its excellent output, three-year warranty, construction quality and $56 price tag, the Shurflo 1,500 was testers’ top pick in the low-capacity group.