LEDs in Emergence
You published a letter in your June 1 edition this year in which the writer questioned the feasibility of LED lights for on-board application. I’m not certain I fully understand LED technology, particularly for sailboat applications. Can you help me out here?

Before we discuss LEDs, we should first mention the feature article in this issue comparing cabin lights. That piece offers insight into how LED lights fit into the range of available cabin light options.

LEDs (light emitting diodes) have quietly evolved over the years, getting brighter, and becoming available in many colors. For years, the quest was for an affordable blue LED to be used in making white lamps. The first blue LED lamp we’re aware of cost over $250 back in 1982 and barely emitted any light. Now, blue LEDs cost just pennies and are very bright. White LEDs (a combination of red, green, and blue LEDs) likewise are inexpensive, plentiful, and finding work in what were typically incandescent applications.

Currently, LEDs find great use in directional lighting applications, especially those that require a colored light. For example, traffic signals with LEDs use about 80% less electricity than their incandescent versions. In 2002, the state of California estimated that nearly a third of the traffic signals in the state used LED lamps and were saving over 10 megawatts of electricity each year-enough electricity to supply 10,000 homes-and saving $7.9 million.

LEDs achieve their brightness by a combination of factors, but two of the biggest factors are the reflector that the LED chip sits in and the lens above the chip. To achieve its high brightness, the LED light spread is very narrow compared to other lamp types. This works out great for directional applications like traffic signals and flashlights, but its not always best-just yet-for boat lighting.

Navigation lights seem like a natural for LEDs. For example, a port bow light needs to be directional (10 points or 112.5) and red. A red filter in front of an incandescent bulb removes all the colors except red from the light and baffles direct the light as required. However, most of the light from the incandescent lamp is wasted as heat. A red LED gives the proper color without any light-wasting filters, but its directionality is much too narrow for a running light. There are, however, some companies, such as Deep Creek Design, making specialty LED lamp assemblies for navigation lights. We look forward to all LED-based navigation lights one day while sailing and not worrying about the power being used, especially when we forget to switch off the lights after the sun comes up.

For those who want to retrofit existing fixtures with LED technology, the Deep Creek StarDrop LED cluster series (we didn’t test those in our Cabin Light Comparison) is an advanced option. The clusters start at just under $200 and go up from there. If you want an LED cluster to equal the output of a 10-watt halogen lamp, they can make it for you, but itll cost you dearly. Clusters are hand-made with premium Lumileds LEDs, advanced Deep Creek driver, and proper heat sinks, and come with unconditional guarantees. If you want some LED lore, get in touch with Rob Hoffman at Deep Creek (615/646-2532). Lumileds, by the way, is also a well-established, high-quality firm; first-class documentation is available on the company website.

There are off-the-shelf LED navigation lights on the market, although they are all in various stages of USCG approval, and the one-mile lights wont do on larger boats. You can find many of these sold via Orca Green Marine, Hella Marine, Taylorbrite, and SailNet.com. 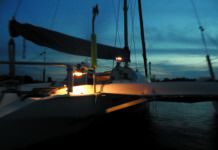