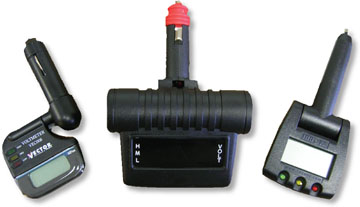 We have among us those who carry around thin, pocket-sized multimeters, so that they can probe this and trace that. Nerd alert! There are also those who cannot cast off without having a sophisticated Xantrex report on every sordid detail of their batteries hidden lives-volts, amps used, amp hours remaining, amps to be charged on revolving credit, amps hiding in the broom closet, float charging, backstroke charging…geek alert!

As we floundered around in a Wal-Mart automotive department not long ago, our eyes settled on a product that many of our readers probably know of already. The simple voltage meter, which plugs into a cigarette lighter socket, could be just the ticket for those of us who are neither geek nor nerd, but quite possibly dweeb. We own the smaller, simpler boats with fewer knobs, dials, and displays. We own the one-battery boats, where, if youre not careful of your accessory usage, you can’t fire up the engine again. While we might have engine voltmeters and ammeters, we often have no easy way to check voltage without the ignition on, or a dedicated meter, or hauling out the multimeter. This little plug-in gizmo, with a digital read-out to the nearest tenth of a volt, is a nice compromise as long as you have a 12-volt receptacle.

The Vector and Innova meters show black digits on a gray background, while the RoadPro shows backlit numerals through a black screen. Those numbers are not bright enough, in our opinion, for optimal daylight viewing, but they do make the RoadPro easy to read in the dark. The RoadPro also has two 12-volt sockets built in. The two sockets can carry a combined 15 amps. The Vector meter has good lighting, with bright High/Medium/Low lights and a subtle, always-on backlight behind the read-out. The Innova has no backlight.

How We Tested
All three meters were hooked to a fully charged 12-volt dual-purpose battery (SeaVolt from West Marine)-at the same time with individual sockets, and ganged together. Their readings were compared to those on a good-quality Radio Shack digital multimeter. We then left all three hooked up to the battery and applied a heavy draw on the battery with a KAL 100-amp load tester, and took readings. After that, we sapped the battery gradually with a desk lamp run through an inverter, and tried all three meters when the Radio Shack multimeter showed about a half-charge, and again at a very low state of charge.

Since neither socket choice nor direct socket connection to the battery made any apparent difference, we plugged the Innova and Vector meters into the RoadPro sockets and left this kinky arrangement in place for the load test and lamp drain experiments.

What We Found
When the battery was newly charged and measured by multimeter at 12.92 volts, the Vector unit jumped around quite a bit between 12.6 volts and 13.1 volts, and occasionally showed all its number segments before settling at 13.1 volts. The Innova showed 12.8 and the RoadPro 12.9, both steadily. This relationship of readings continued: As battery voltage dropped, the RoadPro and Innova meters were in close agreement with the Radio Shack meter, while the Vector meter was consistently high by anywhere from one-tenth of a volt, which isn’t a big deal, to three-tenths, which can be a significant error in the 12-volt range.

Conclusion
For us, it comes down to the Innova and the RoadPro. Price isn’t important-you could get any of these meters within a few dollars of the others. The Innova adjusts easily, is easy to read in daylight, and takes up little space. It suffers from the lack of a backlight. The RoadPro is bigger and clunkier, and is harder to read in good light. But it does well in dim conditions, and has those extra sockets. Heres an idea: For around $25, you can get both, one for outside, one for inside, one for night, one for day, one for the boat, one for the car…