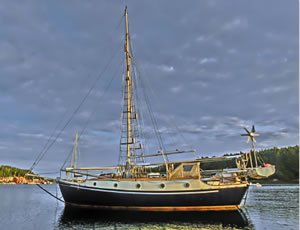 Sailors obsess over the health of their engine; it is the heart of the boat (other than the rig, sails, and through-hulls). Failure is inconvenient, expensive, and even dangerous. And sailors love their maintenance, or so it seems. Anything that promises to ease the mind for a few dollars merits investigation.

A laboratory can test engine oil for many things to determine its health. A typical lube test kit costs $25 to $50, takes two to four days to complete, and provides a wealth of information on internal wear and contaminants, as well as other changes in chemistry and physical properties. For heavily used large equipment and fleets, this is practical and common, but for smaller engines, a quick field check is easier to justify. Fortunately, many of the changes in oil chemistry result in physical changes that can be observed though paper chromatography. There are a few packaged one-drop test kits designed for field-testing oil, and there is also the less official business card test, which is often mentioned on the Internet. To compare the performance of these two types of field tests, we decided to try both on various engines.

PSs lead tester for this review is experienced in the engine-lubricants business and often carries out tests the laboratory way. Based on his experiences in the lab, we knew that a sort-of chromatography happens as oil drops fall on note papers and spread in characteristic patterns. (Chromatography is the process in which a chemical mixture, carried by a liquid or gas, is separated into components as a result of differential distribution of the solutes.)

It seemed reasonable to us that by codifying these differences, at least a few common problems could be spotted; however, we anticipated less accuracy than the lab tests. Because oil contamination from fuel or coolant are the most common concerns for marine engines, we focused on these.

The makers of one-drop test kits supply interpretation cards, intended to help the user judge the meaning of what he sees. How the oil and particles move through the paper is affected by particle size, chemistry, and viscosity. Although the tests are not quantitative, they can reveal changes in physical characteristics.

Dirt: Obviously, the darker the oil, the more contaminated it is, but the size of the particles is also important. So long as the dispersants can keep up and the particles remain relatively small, abrasive engine wear is minimal. Diesel oil becomes black with soot very quickly, but that alone is not troubling. What we are concerned about is larger particles, and these will clog the paper and result in hard-edged rings.

These large particles can indicate filter bypassing (very dirty oil has clogged the filter), coolant leaks (see below), or excessive wear. The engine must be warmed-up before sampling. You must warm up the engine before sampling; otherwise, you might get a false reading, since small particles will have had time to agglomerate and appear as large ones.

Coolant leaks: Sometimes you will see the water directly as dots, either clear or black; they will draw soot particles to the interface. If the contamination is very high (over 15 percent), the oil will be brown or milky rather than black. More often, if the contamination is slight or uncured over a long period, the water will evaporate during operation. We will see only the residual effect of droplets that had been dispersed, drew dirt particles together, and then evaporated away, leaving only oversized dirt-particle agglomerations behind. In this case, the oil will look much like very dirty oil, with a smaller, hard-edged center ring. Sometimes, there are slight changes visible due only to condensation (an engine that has not been used much). Coolant contamination is serious and must be confirmed by laboratory testing for glycol.

Diesel and gasoline: Being much thinner than oil, diesel and gas fuels create a large, light-colored ring, beyond the oil spot. If the gasoline contamination is severe, youll smell it before you can see the difference. (Gasoline evaporates before the ring can spread too far.) With diesel, a nice wide ring will appear. However, this is dependent on temperature and oil viscosity.

We tested two methods of do-it-yourself, one-drop, engine-oil testing: the widely available Engine Check-up test kit and just plain cardstock (Neenah Bright White Cardstock, 65-pound) that you can get from any office supply store. We also tested several types of filter paper and blotter paper, but none performed better than plain cardstock, so we did not include those results in this report. We did not test business cards because of variability in the cardstock.

We tested the oil from cars, heavy-duty diesel trucks, and outboard engines. We tested engines in regular use, engines in intermittent use, and engines with known cooling system leaks. We contaminated oil samples with measured contaminants. While results cannot be expressed quantitatively, a photo essay of typical results paints the picture (see accompanying photos).

The one-drop method is a very simple process, accessible to anybody under field conditions, but there are caveats.

The Engine Check-Up test kit includes a blotter sheet with windows for six drop tests. Each window has a cover that is easily removed, but it will not fall out accidentally; testers found this convenient for preventing accidental drops. A brochure and interpretation sheet is included. We have posted an a copy online as an example.

The Engine Check-Up paper blots were somewhat more readable and consistent over time than cardstock; the paper has been treated to stabilize the chromatogram (oil pattern). The covering material and frame for notes work well, minimizing smears to unused sections. (Always approach from the cover side-drops have a nasty habit of falling in the wrong place.) The patterns are easier to read, especially for clean oils, though the accuracy and information for both Engine Check-Up and cardstock are equivalent, in our opinion.

We did not find that contaminants always looked exactly like the Engine Check-Up interpretation sheet. Glycol and water were more likely to look like the Grime indication, particularly for gasoline engines. Gasoline dilution did not show very well; we suspect it evaporated before it could spread, though it was easy to smell. But we did feel that when we had a good baseline of tests, we could see minor changes. The more consistent the technique (temperature of oil, drop size, temperature while developing, engine hours), the more sensitive the test.

Bottom line: We recommend this as a tool for monitoring engine oil for coolant leaks, fuel dilution, and general contamination.

We tested different types of cardstock and noted only small differences, so it appears any un-coated business cardstock will do. The only major downside to using cardstock rather than a ready-made kit is that there is no interpretation card. Weve shared a few photos here, but there are many permutations, and youll have to build your own experience base.

The Neenah Bright White Cardstock we tested cost $16 for 250 sheets.

Bottom line: This method is very inexpensive and showed little difference in accuracy from the ready-made test cards, as long as you stay with the same batch of cardstock.

Although a one-drop chromatogram is a poor mans substitute for laboratory oil testing, it is useful for monitoring a known engine. Consistency of technique is vital: The engine must be warmed-up, oil-drop size should be uniform, oil grade and type should not change, air temperature while developing should be consistent, and engine hours must be consistent. If any change in the blot is noticed, arrange a lab test to accurately determine wear metals, or coolant and fuel contamination. We would not extend oil-change intervals based on a blotter test, since it does not measure acidity or additive depletion.

Dont rely on a blotter test for the pre-purchase evaluation of a used boat; there are too many unknowns that could skew results. A perfectly good engine can look bad, if it sits too long and a problematic engine with a recent oil change can seem good as new.

You don’t need to shell out $3 a pop for official blotters once you have a comparison chart (see this article online for an example) and have had some practice. The card stock served perfectly fine for tracking engine health. 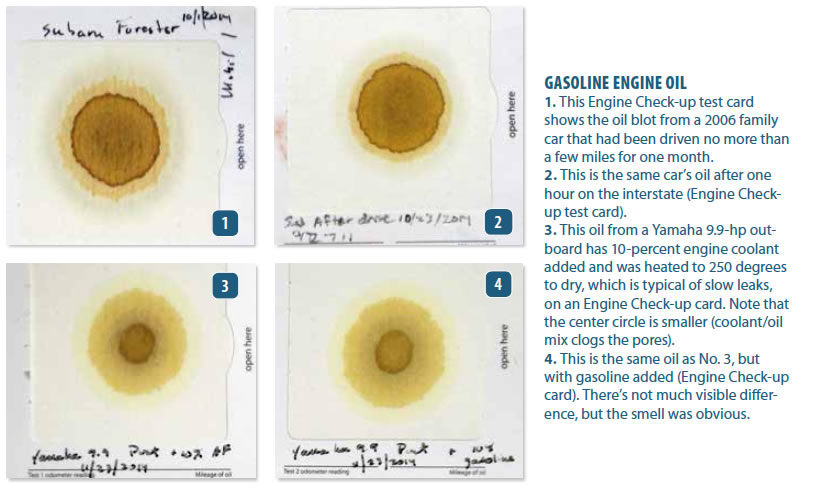