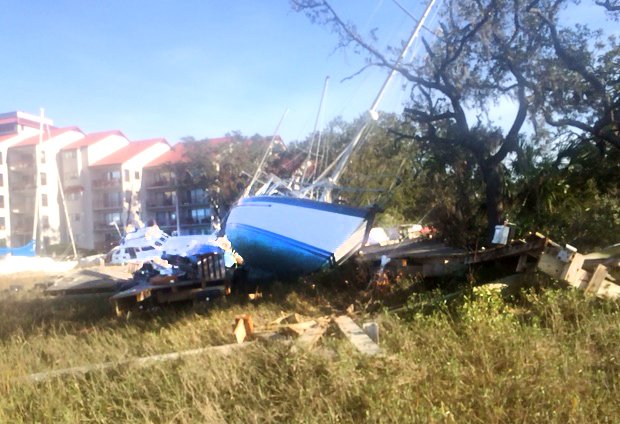 If you are in the market for a used boat and live where winter storage is the norm, now is probably one of the best times to bargain. The owner is looking at another year of storage bills for a boat he no longer wants, and he knows that trying to sell a boat thats buttoned down for the winter is like trying to sell a house thats under a circus tent.

However, if you are anywhere near the pathway of last years Hurricane Matthew, that bargain boat might well turn out to be your worst nightmare. Back in 2007, we published a special report on what happens when a fiberglass boat is subjected to the point loads that can occur during a storm. More recently, we offered a guide to the do-it-yourself survey that can help you identify cost-prohibitive repairs before paying for a professional survey. For the undaunted buyer who wants to wade hip deep into a restoration project, our guide to do-it-yourself boatyards can also help estimate the true costs of a long-term, do-it-yourself repair project.

How many post-Matthew boats are on the market is not clear. BoatUS recently estimated the storm did more than $110 million dollars in damage to recreational boats. After a Hurricane Sandy in 2012, the boaters’ advocacy group offered some good advice on how to identify a storm-damaged boat that has been dressed up for sale. The release also cautioned that the same protections that car buyers enjoy in some states often dont exist for buyers of used boats. Buying an as is used boat is truly caveat emptor. Anyone contemplating going this route should definitely read the short advisory from BoatUS first.

One recurring theme in the three Practical Sailor articles I cite above is that severe structural issues can quickly turn a bargain boat into bottomless moneypit. Here are just three of the serious problems to look for.

Core damage – Once the outer skin of a cored hull or deck is breached, the core damage can spread widely. Most often, this is a long-term process as plywood or balsa (probably the most common core material in production sailboats) rots. A Matthew boat that has suffered a breached hull or deck might have damage limited to a small area that might be relatively easy to address. However, some core constructions can deteriorate rapidly when they become wet, in which case, a small hole can be the tip of the iceberg in terms of core damage. Even core that is not wet can suffer bond-failure, in which the outer fiberglass skin has pulled away from the core. This diminishes the structural integrity of the hull and can occur in areas far away from the point of impact.

Secondary bond failure – The chemical bonds between interior structures (such as bulkheads, pans and liners, and furniture) are generally not as strong as bonds formed during the molding process. As a storm-wrecked boat is battered on a beach or mudflat, unsupported areas of the hull will flex, stressing these secondary bonds to the point of failure. Unfortunately, many of these failed bond lines are hidden behind bulkheads, liners, and cabinets, virtually invisible until you start unscrewing furniture.

Hidden structural failure – Mast, keel, and rudder loads spread throughout the boats hull. This means that a simple grounding can cause damage in places far away from the point of impact. It is not uncommon that a boat that has grounded hard shows structural failures in unexpected areas of the deck, main bulkhead, or mast partners. Rudder damage is often the first sign of more serious problems in the bearings, rudder stock, or rudder framework. If the prop and shaft were subject to severe pounding, those impact loads surely transmitted to the strut and supporting structure.

Submerged engine – Beyond the obvious problems such as water-stained woodwork, ruined upholstery, and mold and mildew, there are less obvious problems associated with a boat that has sunk. A diesel engine that has been damaged by salt water can often be resurrected to run temporarily without addressing corrosion issues that can come back to haunt a new owner. Have an experienced mechanic closely inspect any storm damaged boat, and ask for receipts for any repairs to the engine. If it has been submerged and has no history of a rebuild, figure a complete rebuild (or new engine) into your budget, just to be safe.

We strongly encourage anyone contemplating buying a storm-damaged boat to work closely with an experienced surveyor. Taking on the challenge of restoring an insurance write-off is not for the faint of heart, and in many cases, does not make economic sense. However, more than a few cruisers are happily circling the world in boats they rebuilt from scratch. The good thing about this approach is that you know your boat inside and out. The bad thing is you know exactly what it cost you in blood, sweat, and dollars. Sadly, some Mattew boats will not be worth saving. 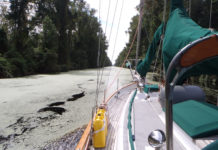 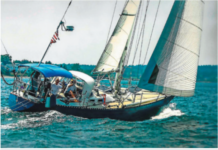