Based on US Coast Guard statistics, surprisingly few boaters enable the Digital Selective Calling (DSC) function on their VHF radio, or have it operating correctly. From what we are hearing from some marine manufacturers like Icom, the numbers for marine single-sideband (SSB) marine radios-the topic of our ongoing series of tests-are just as discouraging. It doesn’t have to be that way. With a few simple tools and maybe a trip to a Radio Shack, getting your radio DSC-ready can be carried in a single weekend.

Older single sideband units, some of which are still in use and are readily available on the used market, don’t have DSC capability. And many that are DSC-ready, arent interfaced with a GPS, which is essential for DSC to function correctly. In this post Ill look at the steps to enabling DSC capability on a the most popular high-frequency (HF) SSB radio, the Icom M802, and directing you to references that will help ensure that youre prepared to make a DSC emergency call.

The Icom M802, our best choice in our recent HF radio market scan, has full DSC capabilities, but in order to take advantage of the DSC function, youll need to have it interfaced with a GPS, and have a Maritime Mobile Service Identity number (MMSI). The radios will not transmit a DSC call until a valid MMSI # is programmed into it. To obtain an MMSI number, a U.S.-flagged vessel will need to obtain a Ship Radio Station License from the Federal Communication Commission (FCC). This is a requirement for all U.S.-flagged boats that operate a single-sideband radio. Upon registration with the FCC, you will be assigned an MMSI number, beginning with 366 or 367. This number is assigned to the vessel, not the radio itself. (An FCC license is also required for all U.S. vessels that travel abroad, even if they have only a VHF. For more on who is required to be licensed see the FCC website.)

Important: Even though you may already have an MMSI number for your VHF through a Boat US or SEA TOW, that number is NOT valid for use with a marine single-sideband. You will need to apply for a Ship Station License, completing Schedule B along with your FCC License Form 605. Upon accepting your application, the FCC will assign you a new MMSI for your boat. The new MMSI will be coded for international waters and the registration will be entered into the International Search and Rescue database. This is the number you should have programmed into all applicable radio equipment on board, including Automated Identity System transmitters. The FCC license application has a list of the range equipment that can be covered by the single MMSI assigned to your boat.

As it is shipped by the factory, the M802 displays the message NO DSC NUMBER when it is powered on; this refers to the fact that an MMSI has not yet been programmed into the device. If you have a used Icom M802 that a previous owner has programmed with an MMSI, you will need to contact a local Icom marine dealer and they will need to re-program it to accept a new number. The numbers are not transferable.

In addition to programming the MMSI number in the marine SSB, you also need to supply it with GPS data. There is a jack on the rear of the radio box for this data connection.

Next, you need to add a DSC receive-only antenna to the empty antenna jack, on the back of the radio. For transmit, the radio uses your normal SSB antenna-insulated backstay, etc. But for receive, you will need this additional antenna. Fortunately, this receive-only antenna is inexpensive and fairly simple to install.

Incoming DSC signals are usually very strong, so almost any external coax-fed wire antenna will work well. One step up from a simple wire is the popular proven is the Metz DSC Receive / WeFax antenna, secured to the stern rail. This keeps the antenna as far away from sources of interference as possible, allowing for the best overall HF receive performance in a simple, inexpensive antenna.

You will want to test your installation. We have had several reports of professional HF radio installations (mostly abroad) not being up to snuff. If you are working with an installer, we recommend the installer at least have a General Class Radiotelephone commercial license and possess the right test equipment to confirm proper operation. Ideally, this person would also have certification through the National Marine Electronics Association (NMEA). After the initial check, you will want to do routine testing to make sure everything works.

The International Maritime Organization is advising mariners to minimize testing to once a week because test calls are overwhelming the system. U.S. Coast Guard offers guidance on making a DSC test calls on their website. These test calls should be initiated through the DSC menu, NEVER by lifting the red distress button cover. For example, the group call for the Coast Guard monitoring station in Point Reyes, California, would be to 003669999. Unless it is an actual emergency, stay away from that RED DISTRESS BUTTON! Becoming familiar with all the DSC types you might transmit-distress, all ships calls, individual call, group calls, and test calls-is not only important for safety, it can add a new dimension to your cruising by expanding your communication capabilities at sea.

If you are installing it yourself, or to confirm the expertise/proficiency of your professional installer, we advise reading the Sailmail Primer and following their recommendations, as well as the much learned advise available from the Seven Seas Crusing Association.

The United State Coast Guards long range communication facilities guard four marine single-sideband frequencies at eight stations, although that coverage is not simultaneous, nor is it 24/7. The station names, frequencies, and times (universal time) that each station monitors those frequencies are listed here at the US Coast Guards Navigation Center website. If you do not have a DSC-equipped radio and are making a voice distress call, you should be familiar with these frequencies and times.

Remember, although the U.S. Coast Guard maintains a voice watch on these frequencies, they are no longer being monitored for voice traffic in most parts of the world (another good reason to enable the DSC function).

It is also IMPORTANT to note that as of August 1, 2013, the U. S. Coast Guard terminated its radio guard of the international voice distress, safety and calling frequency 2182 kHz and the international digital selective calling (DSC) distress and safety frequency 2187.5 kHz. For details, see the U.S. Coast Guards safety alert. Owners of older units that are pre-programmed with distress frequencies should pay particularly close attention to this alert. Unfortunately, there are mountains of how-to books and websites that still refer to 2182 kHz as the distress frequency.

If you have a current DSC-equipped radio, your distress message is sent simultaneously out on all of the active distress frequencies. Because of overlapping coverage in some areas, your initial distress call may be received by multiple Coast Guard stations. Their computers, tied into the Global Marine Distress Safety System, will help determine which rescue coordination center will become the primary station answering your Mayday call.

The US Coast Guard website details the special conditions and procedures for DSC distress communications on HF radio. Except for frequency selection, they are not much different than those used for VHF radio. The YouTube video above posted by PS reader John MacDougall, a radio engineer and systems designer with 40 years experience, covers the steps required for enabling DSC and making a DSC call. 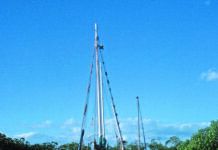 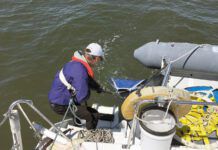 How Sailors Can Be Citizen Scientists 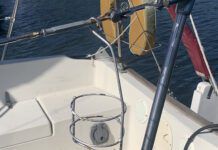 Quest for the Sailboat Cupholder