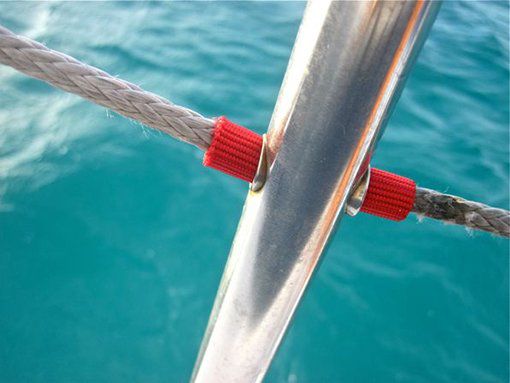 New single-braid, high modulus polyethylene (HMPE) lines, such as Amsteel Blue from Samson Ropes, WR2 (wire rope replacement) from New England Ropes, and Vectrus from Yale Cordage have revolutionized the way sailors think about standing and running rigging. Bit by bit, these low-stretch ropes are replacing wire rope on board. But the changeover is not without controversy.

In several reports, Practical Sailor has examined the pros and cons of high-modulus fiber in standing and running rigging. In August 2007, we looked at how fiber halyards match the stretch resistance of wire. In September 2007, we discussed the challenges in finding terminals for fiber standing rigging. More recently we looked into replacing wire lifelines with fiber (see PS September 2012). Although we still advocate uncoated (without any sheathing) stainless-steel wire lifelines for cruising sailors, we are well aware of the allure of fiber lifelines and are carrying out a series of tests so that readers recognize the pros and cons of making a switch to fiber. In an upcoming issue we look at one of the chief concerns with fiber lifelines, preventing chafe.

Fiber lifelines exhibit two kinds of chafe. There is visible chafe that occurs when lifelines are used as handholds (a bad habit), or where sails and sheets bear on them. More troublesome is the chafe that occurs in the stanchion holes. Clearly, if you’re considering switching to a fiber lifeline, you’ll want to closely inspect any possible chafe points, and deburr and polish (with 600 grit sandpaper) any places where the line makes contact with stanchions.

If you take a close look at your stanchion holes, you might be surprised to find a sharp burr caused by the small, but steady sawing of the wire lifeline. Often this is hidden from view. For this reason, you should always polish stanchion holes before switching to fiber. Burrs on the lip should be rounded with a countersink or fine grindstone on a Dremel tool, and then both the lip and interior should be polished with fine emery paper, down to 600 grit. A groove in a stanchion holes means that there is surely a burr on the inside edge, requiring not only polishing, but some form of chafe protection. For more on chafe protection options see the article Fiber Lifeline Protection Plan.

Drew Frye is technical editor for Practical Sailor and author of Rigging Modern Anchors (Seaworthy Publications). He also blogs at his websitewww.blogspot.saildelmarva.com.