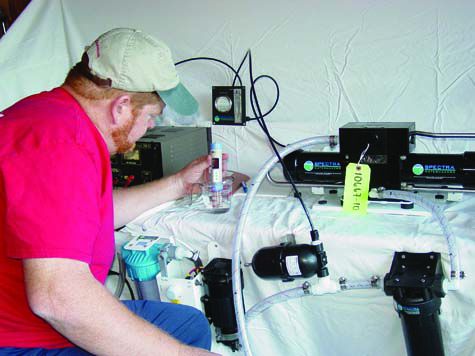 While the rest of North America was soaking up the holiday season, our intrepid systems tester Frank Lanier and Managing Editor Ann Key were hip deep in the briney world of watermakers. Although most of the testing was carried out after Thanksgiving, I still had a lot of questions to answer as the New Year came and went-like do I really need one of these things?

Though my wife Theresa and I cruised quite happily in some very remote areas with 70 gallons of water in tankage and 20 gallons on deck (we added another 12 gallons for crossing the Pacific), our lifestyle was uncompromisingly Spartan. Saltwater baths with freshwater rinses were the norm, and we learned to endure the lumbering pace of heavily laden Tosca-a heavy displacement William Atkin Thistle design. We were also young and strong, and capable of lugging water jugs over mountains, and across deserts and prairies.

Nevertheless, I can think of several places where I would have been thrilled to have had a limitless supply of clean drinking water, and one of them is right outside our backdoor. The outer islands of the Bahamas and the Turks and Caicos are great places to linger for weeks, but the islands can be extremely dry-especially during the winter. My most vivid worst memory of jug-lugging was making six half-mile trips across the old salt pans of West Caicos to a spigot that delivered free freshwater. It was July, and temperatures hovered in the mid-90s with humidity to match. Not a breath of wind. That I drank half my quarry on each trip didnt help.

The biggest hurdle between me and a watermaker is the expense. The two DC watermakers we tested, the Little Wonder (LWM-145) and Spectra Ventura 200T Deluxe, were priced at more than $6,300. (Look for the test report in the February 2013 issue.) At that price-enough to add another 50 gallons water capacity and fill it with Pussers-the salt pans of West Caicos don’t look so bad. But its not just the price of a watermaker that is holding me back. Theres installation and maintenance.

The systems we tested were modular units that, with a little creativity, wouldnt be too hard to fit on a mid-size cruiser. However, Id also need to install a dedicated inlet seacock and a through-hull fitting above the waterline for waste brine discharge. And Id need to install a manifold system that lets me divert water either overboard or into the boats water tanks. Its also a good idea to have a means of diverting the water to a sink for testing. Of course, I will also need a dedicated, high-capacity, DC electrical circuit protected by a suitable circuit breaker to the watermakers motor. In short, like just about anything in life, its easier said than done.

I’d have to change pre-filter elements on a regular basis, and I would also need access for pickling the membrane if the unit is to be stored for long periods. At the very least, Id want some simple analog gauges and flow meters in a visible location so I could monitor performance and be forewarned of problems.

The good news is that maintenance is getting easier.

While pickling a stored watermaker membrane was once the rule, current prescriptions suggest the best way to store a watermaker is to flush it regularly with freshwater. However, on an unoccupied boat, regular flushing requires a fairly sophisticated, electronic, automated controller system to flush the system on a weekly basis.

The Spectra Venture 200T watermaker we tested, for example, offers an optional multi-processor controlled (MPC) unit. The MPC unit can be set up so that it will fill the tank, flush fresh water at the end of each production cycle, and perform a freshwater flush every five days until the system is used again. This not only eliminates the need for storage chemicals (pickling), it keeps the unit ready for use.

The difficulty with this approach, however, is that the boats DC system must be on 24/7 and the system must be reliable enough to function untended for weeks at a time.

There are a couple other options for watermaker storage. One is Spectras Z-Brane system, which is designed to permanently eliminate chemical cleaning and preservation steps while prolonging membrane life. (Each time a membrane is chemically pickled, it reduces its service life.) The Z-Brane module creates an environment that is unfriendly to bio-film and bacteria, allowing the system to be shut down or decommissioned for extended periods of time without chemicals or preservatives.

This spring, Spectra will be introducing the Z-ion, a new product that can be retrofitted to all brands of watermakers. Spectra has invested several years of research and testing to develop a silver-ion generator that will protect the watermaker against biological growth every time a freshwater flush is conducted.

The Z-ion is a safe and proven technology (used for years in the spa industry) that consumes very little power, only during the flush cycle. Its completely automatic and is controlled by the flow of fresh water during the flush cycle, so it can be added to any watermaker. According to Spectra, the Z-ion will disinfect your watermaker for up to three months, making short-term pickling and stinky filters a thing of the past.

And the price? The pre-production price estimate for the Z-ion is around $1,000. 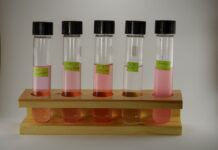 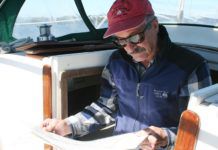 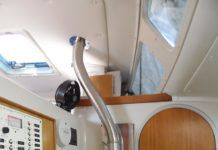