Weve been tracking man-overboard beacons, flags, and lights for more than 30 years now, most recently with a series of tests of electronic beacons that allow crew to self-rescue overboard crew members. One of the biggest shortcomings of many of these electronic devices was the inability to track people in the water.

Most of the more modestly priced beacons acted simply as alarms telling the crew that someone had fallen overboard. If you wanted to try to use any kind of electronic tracking system to relocate lost crew, the gear became more complicated and prices skyrocketed.

This is about to change as the relatively inexpensive technology behind the Automated Identification System (AIS) and Digital Selective Calling (DSC) are going to be officially incorporated into man-overboard tracking. This has been in the works for a long time, but because of the red tape involved, progress has been slow.

However, this month, we got news that the U.S.-based Radio Technical Commission for Maritime Services (RTCM) has just completed a new standard for Man Overboard (MOB) beacons using Digital Selective Calling and/or the Automatic Identification System. Although the Federal Communications Commission (FCC) hasnt yet give its OK, the FCC generally abides by the RTCMs recommendations.

According to a news release from the RTCM, the standard requires MOB beacons using DSC and sending “open loop” messages (i.e. standard all-ships distress calls) to be fitted with a GPS and a DSC channel transceiver.

The GPS automatically inserts a position in the DSC (and AIS) call, and the DSC transceiver allows the beacon to receive DSC acknowledge messages from shore stations and other ships.

When first activated, the beacon sends a “closed loop” DSC alert on the designated DSC VHF freqency – this is a DSC distress relay call (with nature of distress “man overboard”)- addressed to a particular Maritime Mobile Service Identity (MMSI). The MMSI number will typically be that of the parent vessel. Being that it is a distress priority call, the activated beacon rings the alarm on the receiving DSC-equipped VHF radio. Since the call is addressed only to a specific station (or a group), other ships will not initially receive the call.

This is based on the reasonable assumption that people on the vessel you have just fallen off are in the best position to help you. As soon as the GPS gets a fix, a second closed loop alert is sent with position.

If an acknowledgment message is not received after five minutes (i.e. you haven’t been found by the vessel you fell off due to sea state/darkness/fog), the beacon will then switch to “open loop” mode, by transmitting a standard all ships distress alert with nature of distress “man overboard” and GPS position automatically inserted.

This will alert all DSC-equipped ships and shore stations in range (normally about 2 nautical miles).

The AIS transmitter will send the standard Message 1 “position report” with the navigational status set to 14 and Message 14 “Safety related broadcast message” with the text “MOB ACTIVE”. This will display on a ship’s AIS display as a cross/circle symbol-the same as for an AIS Search and Rescue Transponder (SART).

Beacons with DSC and AIS will use a common ID number for both transmitters.

We expect virtually every company in the man-overboard alarm business to introduce products using this technology. Two companies, Kannad Marine and Mobilarm,already have products that use this technology, and U.S. Digital Yacht has also announced a product that uses the new technology. We recently tested a similar technology in a compact transponder from BriarTek. Prices for individual transponders hover around $350-$400, and AIS recievers start at around $150, but we expect the transponder prices to dip as the market becomes more competetive. 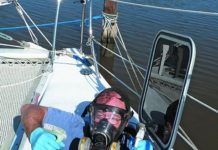