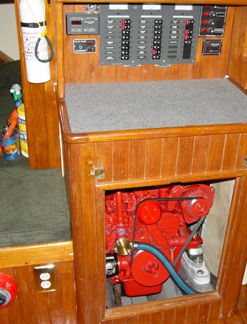 Practical Sailor reader Duncan Hood wrote us last week, asking about engine room noise insulation and prompting me to dive into our files to find our last test. Its been over a decade, so were due for another round of testing, but much of the information in our last report is still helpful.Many of the players are the same, and one of the most prominent players in our last test, Soundown, is still regarded as a leader in the field.

For those like Hood who are contemplating ways to silence the engine, the following excerpt from that article offers some general guidance. (Subscribers can access the complete insulation test of 10 different insulation products online.)

Engines make noise. Crew-especially when theyre trying to hold a conversation, sleep, or just relax-don’t like noise. The solution? Isolate the crew from the engine noise and vibration.

Noise and vibration are inseparable. Noise exists because vibration causes variations in the air pressure that reaches the ear. This is perceived as sound. An effective control deals with both the vibration and the airborne noise.

Noise levels are measured in decibel units, usually referred to as dBA (the A denoting that the measurement is adjusted for the frequency response of the human ear, rather than the total sound level energy). Everyday sounds fall into a range from roughly 25 dBA (a suburban bedroom at night) to 100 dBA (a chainsaw at a distance of 3 feet).

A sensitive ear can distinguish differences of 1 dBA, but it takes a 5-dBA difference to be noticeable. On a boat, an unshielded diesel genset will produce sound levels of 100 dBA at 3 feet; an inboard typically raises the noise in the engine room to about 110 dBA. The object is to drop those levels to approximately 75 dBA for more-or-less normal conversation, and another 20 dBA for comfortable sleeping with the engine running.

There are three basic approaches to making your boat quieter. The first step is to use flexible mounts to isolate the vibrating machinery from the hull. These help prevent the transmission of vibration through the solid structure of the boat, and the consequent reverberation of hull sections that can act like amplifiers. Correcting any engine-shaft misalignment will certainly help.

The next step is to surround the noise-producing machinery in a tight, insulated enclosure to reduce air-transmitted noise.

The final step is to line enclosed living quarters, such as cabins, with sound-absorbent materials.

Once youve reduced vibration-and the associated structure-transmitted noise-youre ready to deal with airborne noise. The first step is to enclose the noise-generating components-the engine-in some sort of box or compartment. Almost any sort of enclosure will reduce noise levels by 5 to 10 dBA, but improving on that takes an understanding of the nature of noise.

There are only three things that can be done with the air vibrations that we regard as noise. They can be reflected, transmitted or absorbed. Transmission doesn’t do us any good in terms of noise reduction. The 5-10 dBA reduction that comes from putting the engine in a box is due almost entirely to the sound energy absorbed by the box; most of the noise is transmitted right through the boxs walls. Reflection may have some value in some situations, but reflecting sound waves back into an enclosure simply makes it noisier inside the enclosure. A reflective material works when theres somewhere to reflect the sound.

Sound, after all, is a form of energy, and you can’t just make it vanish. You can, however, convert sound energy into another form of energy-heat. The energy dissipates when the absorbent material becomes displaced or compressed.

The amount of energy absorbed depends upon the mass (or weight) of the material, how far its displaced or compressed, and the materials damping capability. Materials like lightweight foams and fiberglass wool have good damping but not enough mass to be effective by themselves. They have a role in dealing with noise, insofar as they can reduce reflection. More specialized sound-absorbers are more effective. These are composite materials with a high-mass layer, one or more damping layers, and (usually) a thin plastic film at each face to protect the damping layer(s) from mechanical damage and moisture.

The high-mass layer should be heavy, limp, and nonporous. It should also be as thin as possible, simply because space aboard is usually at a premium. A sheet of lead works best, but a lead-filled sheet of plastic can be used where a physically tougher material is required. Mass layers of lead typically weigh 1-2 lbs. per square foot; lead-filled plastic weighs about half that for an equivalent thickness.

The range of frequencies that a sound-isolation material can deal with effectively varies with the product of the square root of the weight of the mass layer and the thickness of the decoupling layer. Thus, a 1-lb. per sq. ft. barrier on a 1/4-inch decoupler might only be effective in dealing with high-pitched sounds (500 Hz and higher); doubling both the weight and the thickness extends the useful frequency range to 125 Hz.

Reductions in dB are additive. Lets say an unshielded engine produces a noise level of 110 dBA. If we build a box from 5/8-inch plywood around the engine, wed lower the sound level (measured at 1 foot) to roughly 100 dBA, assuming that the box doesn’t leak and that all openings are taped. If the vent openings to the box lead overboard rather than into the cabin, you can reduce noise by another 15 dBA or so. Make sure that your vent ducts are baffled, or make up a labyrinth with several 90-degree turns.

If you line the box and the vent ducting with a simple absorption layer of fiberglass or foam, youd only lower the noise level outside the box by 5 dBA or so, even if you used a thick layer of sound-absorber. If you lined the box with a composite material (1-lb./sq. ft. mass layer, 2″ thick overall), youd get the noise level 2′ from the box down to a bearable 76-78 dB, or 61-63 dBA if the engines air vents are ducted overboard.

The actual noise level in the cabin will depend on the distance between the engine box and the cabin; sound levels drop by 6 dBA each time you double the distance from the source. If the berths are close to the engine, you can also apply absorbent material to the cabin ceiling and walls (1/2 to 1-inch foam-backed fabric and perforated vinyl headliners are popular choices). If you find that noise is coming up through the floor, try noise-absorbing carpet. As a bonus, these materials are also good thermal insulators. 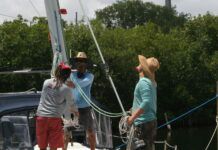