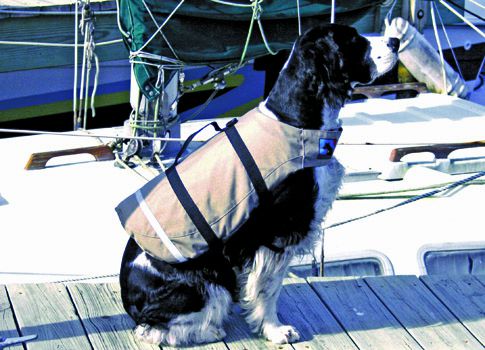 Over the years, we’ve encountered everything from chihuahuas to huskies (yes, huskies) living aboard sailboats, so I’m not convinced that breed matters much, but some dogs are clearly better adapted to boats and the water. The dog lovers among our readers helped us put together this list of relatively small dogs, good travelling dogs that like the water and are happy to curl up in tight spaces during passages.

What follows is a short list of dogs that have been suggested to me as good boat dogs. Many of these are very active dogs, so they would be best suited for bigger boats and owners that took them ashore for long romps during the day.

Schipperke. We encountered one of these Belgian barge dogs while cruising, and it seemed very happy aboard-albeit a little noisy. This was a 60-plus-foot Danish seiner that offered plenty of room for the agile, high-energy dog to roam. Its owner, a former merchant seaman, proudly told us that his dog was a champion rat-catcher.

Bichon Frise. These fluffy little companion dogs are descendants from the water spaniel and the standard poodle. They are good travellers, and they don’t shed. In the 17th and early 18th centuries, they were often carried on tall ships and used as barter items. We once cared for a bichon-poodle mix while its owner was away. The dog seemed quite content aboard the Tayana 37 that was his home, but it wasn’t much of a guard dog.

American water spaniel. These water-loving dogs are much bigger and more active than the bichon, although they are reportedly quite adaptable to apartment life, which I would equate with living aboard.

English springer spaniel. Murphy, our test dog for our doggie life jacket test was a model citizen throughout our two-day test, leading me to believe he’d be quite comfortable on a long-term cruise.

Portuguese waterdog. Before the Obamas Bo, there was Ted Kennedys Splash. These dogs, originally bred to help Mediterranean net fishermen, seem well-suited for the water.

Retrievers. Labrador retriever, golden retriever, Chesapeake Bay retriever . . . any retriever seems like a great choice for a boat, so long as they get enough exercise. I was sad to learn that writer Farley Mowats beloved retriever, a St. Johns water dog, became extinct in the 1980s. Teddy Roosevelts Chesepeake Bay retriever-aptly named Sailor Boy-relished time in the water. Retrievers seem to require a lot of play/work, so I’m not sure whether they would be happy during longer passages, but at least you’d never lose a hat overboard again.

This is a very short list. Other dogs we’ve looked at include Staffordshire terriers, Catahoula, poodles, beagles, Irish setters, cocker spaniels, and even Newfoundlands, but I worry that some of the bigger, more active breeds may need more exercise than the boat life could provide. Owning a dog is responsibility enough when living ashore; only a sailor who truly understands the commitment required should consider bringing one aboard.

I’m interested in hearing about other peoples experience with boat dogs, tips on care, and what breeds they suggest. Please share your comments below. We’d love to see more canine pictures for our Facebook page. You can also email or send digital photos to us ty practicalsailor@belvoir.com