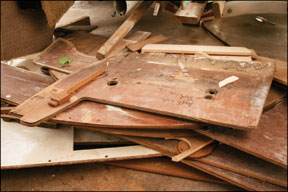 Regular Practical Sailor readers may have noticed that we have a thing for Cape Dory boats. We have three in our test fleet: two 25s, Skimmer and Satori, and a Typhoon, Merlot. Were not alone in our affection for the conservative, “modern classic” design of the Cape Dory. These traditional sailers have one of the most loyal followings among production boats. In fact, most of the respondents in Practical Sailors last survey of Cape Dory owners stated emphatically that they would buy another when the time came to upgrade or that they already had owned multiple CDs.

This faithful following and the boats reputation for good-quality construction enable the boats to hold their re-sale value well, making them prime candidates for a DIY project boat like Satori.

Satori is a 1981 Cape Dory 25, one of the few boats in the CD line not designed by Carl Alberg. Based on George Stadels Allied Greenwich 24, the 25 was a recreation by Andrew Vavolotis. Vavolotis kept its design in line with the classic-looking, heavy-displacement, full-keeled Alberg Cape Dorys. The CD25 is not to be confused with its sistership, the Cape Dory 25D, which is more of a cruiser than a weekender. The only thing the two have in common, essentially, is their overall length of 24 feet, 10 inches.

Although structurally in great shape for her age, Satoris interior had been gutted except for the rotting main bulkheads. Included in the sale price were like-new sails (partially battened main, 150-percent genny, and two jibs); a still-in-the-box 5-horsepower, two-stroke Nissan outboard; a non-functioning head; an array of deck hardware and ground tackle; a 25-gallon plastic water tank; galley sink; and all the rotten wood that had been removed (a bonus as it was used for patterns to cut new pieces).

Completely rebuilding a cabins interior would seem daunting to many, but Satori owner Jon Perkins is a carpenter by trade (whose work credits include a stint at Teakdecking Systems and making/installing all of the exterior wood on Practical Sailors Catalina 22), so he had the tools, resources, and know-how to get the job done-an important consideration when determining the feasibility of a DIY project as large as overhauling a boat.

Though everything below needed to be repaired or replaced, Satori showed no signs of the major problems typical of production boats of her era or of those associated with CD25s.

Cape Dory 25s have moderately heavy, solid-glass layups of mat and roving, but the decks and cabintop are balsa-cored, a potential point for concern in older boats. Satorihad no soft spots in the deck or signs of water intrusion to the core.

The gelcoat on CD25s is typically excellent, and Satori was no exception: Even at 29 years old, she had only minimal surface crazing in a few spots, all cosmetic and in the cabin overhead.

The biggest complaints of the Cape Dory owners thatPractical Sailor surveyed were poor ventilation in the engine well, a lack of ice-box insulation, and leaky ports. To address these issues, Perkins added 2 inches of insulation to the ice box and resealed all of the ports.

Satoris engine well/lazarette was updated with two cowl vents to increase air flow when the lid was closed. The original well had no cowl and had to be propped open as long as the outboard was running.

Other potential problems in the CD25 were the original bronze gate valves that were used instead of proper seacocks. Replacing those is still on Satoris To-Do List, as is replacing all of the original wiring with marine-grade wiring, an update we recommend any buyer of an older boat consider.

Weakened chainplates or poor access to them are also things boat-buyers should look for in shopping the used-boat market. Satoris were in great shape with good access. The Cape Dory 25s mast is deck-stepped, with most of the compression carried by the main cabin bulkheads, which were replaced on Satori during the refit. AsPractical Sailor mentioned in its review of the Cape Dory 25 in the book “Practical Boat Buying,” Cape Dorys “support systems for deck-stepped masts are among the best weve seen.”

Satorisaw numerous other upgrades and repairs during the 18-month refit, including a re-plumbed head that is compliant with Californias stringent marine wastewater laws (installed an 8-gallon holding tank, a lockable Y-valve, a deck pumpout port, and a vented loop) and a new deck washdown pump and shorepower inlet. Only a few small items remain before the project is complete, including outfitting her with electronics and creature comforts, as well as building cabinets for the cabin shelving.

The benefits of a DIY refit are numerous-not the least of which is getting to know your boat intimately and establishing total confidence in it. Custom work means owners can add their personal touch to a production boat. Some unique features on Satori include maple-rimmed finger-pulls on the teak cabin lockers, a deck-style cabin sole, and-our favorite-the teak toilet seat in the head.

When it can be had for a good price and the buyer is up to the project, the Cape Dory 25 is an ideal fixer-upper.

As a project boat for those who plan to fix it-and-sell it, a refurbished CD25 in a similar shape to Satori can fetch $3,000-$8,000. That would cover all of this projects expenses, though not the labor (i.e. “fun”).

For those looking for a fix it-and-sail-it boat that will hold value, the CD25 is also a good bet. There are plenty around, that, with a little love, would make a good weekender for a small family or a coastal cruiser for a couple. As any owner will tell you, the 25 is built to withstand more than the crew can.

With a base PHRF rating of 261 (New England), the Cape Dory 25 is not built for speed but shes no dog under sail either, compared to other full-keeled pocket-cruisers. The 25 serves well as a cruising-class contender with the right sail inventory (including the requisite 150-percent genny), so long as the crew isn’t aiming to set any speed records.

If youre considering a Cape Dory project yourself, you can order our full review of the Cape Dory 25 and 25D at www.practical-sailor.com.

Do you have a refit tale that youd like to share with otherPractical Sailor readers? Send your story (and pictures) to us at practicalsailor@belvoirpubs.com.