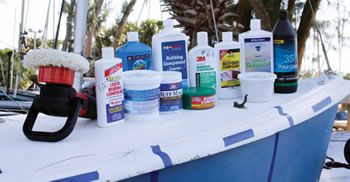 Gelcoat provides a fiberglass boat with a hard, water-resistant protective shell. When new, its polished and waxed to a bright shine, but after a few years of facing the elements-especially damaging UV rays-gelcoat will begin to oxidize and turn into a dull, chalky film on the surface.

There are a few ways to remedy an oxidation problem (see Tips & Techniques), but for this article, we focused on coarse and medium-coarse rubbing compounds, which can be buffed on to remove the chalky layer and fine scratches. The tests evaluated ease of use, ability to remove oxidation and scratches, and whether they left swirl marks; testers also considered price, availability, and eco-friendliness.

Rubbing compounds are abrasive liquids or pastes that are formulated with chemical cleaning agents and aggregate designed to buff away the oxidized layer and smooth out fine scratches. The products-which can be water-based or may contain petroleum distillates or natural oils-are usually applied using an electric polisher, or less often, by hand.

They come in various grits, with the most coarse to be used on badly oxidized hulls and the finer compounds used on newer, less oxidized boats. A boat owner trying to resurrect an old boat or one with severe oxidation likely will start with a coarse-grit (or fast-cut) rubbing compound and follow it with a finer-grit compound, before moving on to polishing and waxing. (For tips on breathing life back into an oxidized hull, check out Tips & Techniques.) All rubbing compounds are abrasive, and if not used properly, they can scratch and damage gelcoat and painted surfaces.

There are dozens of rubbing compounds on the market, so to narrow the test field, we focused on only coarse and medium-coarse products. We asked popular marine chandlers and professional boat maintenance specialists which first-step rubbing compounds they recommended, and we came up with a good cross-section of whats available. The 11-product roster included compounds from top marine maintenance manufacturers such as 3M, Interlux, Star brite, Sudbury, Shurhold, Dolphinite, and West Marine, and those from some lesser-known makers such as Mirka, Fiberlay, and Hawkeye. We also included a few products we picked up from car-maintenance retailers Meguiars and Turtle Wax. All but the Turtle Wax are marketed for use on gelcoat; Turtle Wax is designed for automotive use.

The 3M Marine Rubbing Compound is one of a family of 3M polishing compounds designed for heavily oxidized and scratched finishes. It is fast cutting and should be followed by buffing with 3Ms Imperial Compound and Finishing Material, or another finishing compound, and then waxed.

The thick liquid goes on easily, doesn’t dry out too quickly (thanks to petroleum distillates), and leaves a very good shine. It can be applied by hand or machine, and its priced in the middle of the pack.

The 3M was one of three test products-along with the Mirka Polarshine 35 and the Meguiars-to still have a shine one month after application. However, testers noted that its aggregate left more micro-scratches in the gelcoat that had to be buffed out than did the Mirka or Meguiars.

Bottom line: The 3M is a our Budget Buy pick. It offers the best balance of performance and price for a first-step rubbing compound for badly oxidized hulls.

Made in Massachusetts, the water-based Dolphinite Fast-Cut Compound claims to chemically restore gelcoats original color and leave a durable, high-gloss finish. According to makers, it uses Gelguard chemical additives that penetrate the gelcoat and lift off heavy oxidation, chalking, rust, soot, and stains.

In testing, the thick liquid seemed to work like a rubbing compound and a polish. The medium-grit Dolphinite went on thick and dried hard on the hull. It took some work to remove the haze, but wetting the rag made this easier. However, it did restore the color and left a Good shine. Testers noted no swirl marks.

Dolphinite was the most expensive product in the test, and its availability is limited because its a brand-new product. According to its maker, Jamestown Distributors should stock it by presstime.

Bottom line: This is a good performer, but in this tight competition, it did not make it to the winners circle.

The paste compound wasnt as easy as other pastes to use, but it did a decent job of removing oxidation. It also had a tendency to load up the pads quickly.

Aqua Blue was the second-cheapest product tested; its available online and from Fiberlay stores.

Bottom line: Price is the best thing going for the Aqua Blue. It was not one of testers top picks.

Made by Hawkeye Industries-which also markets Duratec marine composites, primers, thinners and sealers-Aqua Buff 1000F is a water-based, fast-cut compound that contains some natural oils but no petroleum distillates. Along with 3Ms Imperial Compound and Shurholds Buff Magic, Aqua Buff is one of the most popular buffing compounds sold through popular online chandler Jamestown Distributors.

The coarse paste was easy to apply, stayed moist, and did an Excellent job of removing the oxidation and leaving a smooth finish.

Hawkeye recommends following up with the Aqua Buff 2000 polish and a good wax.

Bottom line: Aqua Buff 1000F was the top water-based compound we tested, earning it testers Recommendation as the eco-friendly pick in the group.

The coarse-grit, medium-thick liquid was quick to remove the test boats heavy oxidation and light scratches. It did not splatter, create dust, or leave swirls, and it offered a very good shine that survived for more than a month after application.

At $1.38 per ounce, the Meguiars No. 91 is at the high end of the test fields price range, but it is widely available online and in automotive and marine chandlers.

Bottom line: With No. 91, you get what you pay for. It tied the Polarshine 35 for the Best Choice honor.

Mirka, a Finnish company with an office in Ohio, offers a full line of abrasive products, refinishing tools, and accessories.

Mirkas Polarshine 35 is a medium-coarse grit, silicone-free liquid compound that is water-based but does include some petroleum distillates.

The fast-cut Polarshine 35 clings well to the pad and goes on easily, without drying out. It buffs on well using a mechanical buffer, and polishes to a good gloss. Because the Mirka lacks silicone, its test section retained its shine for more than a month after application. (Compounds with silicone tend to have a more short-lived shine.)

The Polarshine is quickly becoming a professional favorite because of its versatility. It can be applied at varying, higher speeds, essentially acting as a coarse- and a fine-grit compound, and saving a step in the refinishing process. Mirka products can be found online at Amazon.com and at select boatyards and commercial suppliers in the U.S.

The medium-coarse-grit paste was easy to apply to the compounding pad, and it buffed well without drying. It did a great job of removing oxidation and produced a good shine.

Priced in the middle of pack, Buff Magic is widely available online and at retail stores.

Bottom line: Testers Recommend Buff Magic for jobs requiring a medium-coarse grit compound and for those who want to use a complete Shurhold system for the refinishing process.

Star brites Liquid Rubbing Compound is a medium-grit formula made for removing stains and medium oxidation. It can be used on fiberglass, painted surfaces, and metal. We unfortunately overlooked Star brites heavy-duty compound, but well be reviewing it in an upcoming report.

Testers found it easier to apply the thick liquid and paste compounds to buffing pads than the runny, somewhat-messy Star brite, which interestingly loaded the pad more so than most pastes. Although it is made for hand or electric-buffer application, it likely would be a better fit for applying by hand-its quite thin and was easy to remove.

Bottom line: The Star brite wasnt aggressive enough for the Javelin, and it was messy to apply by machine.

Sudburys new Coarse Rubbing Compound is a solvent-based, fast-cut formula designed as the first step in a hull refinishing system. Sudbury also sells a fine rubbing compound that would be Step 2. The Coarse is formulated to remove fine scratches and to be applied with a buffer.

Performance-wise, the Sudbury Coarse was average. The thick liquid went on easily, and did a Good job of removing oxidation. The finishs shine was Good as well, but it had a strange smell.

Bottom line: A good performer with a mid-range price.

Many Turtle Wax products-often designed for auto maintenance-can also be used successfully on fiberglass boats. That, sadly, is not the case with the Turtle Wax Rubbing Compound.

The heavy-grit finishing compound has an aggressive chemical formula that could even damage lightly oxidized gelcoat, if users are not careful. The brown-colored paste stained the porous, white gelcoat on our test boats boot stripe.

The thick paste went on hard and dried quickly. Once it was dried, it was quite difficult to buff or wipe off.

Bottom line: We do not recommend using this on marine gelcoat surfaces.

West Marines NanoTec Rubbing Compound, part of its Pure Oceans maintenance line, uses a natural citrus formula with microscopic particles to clean and buff heavy oxidation and restore a hulls color. The compound uses citrus distillates as a compound carrier, rather than petroleum distillates. Citrus has a far lower toxicity than petroleum, and it biodegrades more quickly. Pure Oceans was the only test product that claims to be biodegradable and eco-friendly.

The Pure Oceans went on easily, but the thin liquid was slower to dry and remove, testers noted. Its performance results were Fair to Good, but it was not a standout in any category.

Bottom line: There were better-performing compounds in this test field.

All 11 rubbing compounds removed some degree of oxidation, and choosing between the top performers was a challenge, requiring a little nit-picking on testers part. It was obvious that the thicker pastes and liquids were easier to use. They stayed on the pads better, didnt run or splatter, and worked the oxidation out of the gelcoat longer.

Mirka, Meguiars, and 3M were top scorers, given the combined factors of ease of use, ability to remove oxidation, and a lasting polished finish. Mirka and Meguiars edged the others out slightly in the scratch-removal category.

In the end, testers tapped the Mirka and Meguiars as the Best Choices and named the 3M as the Budget Buy. Aqua Buff and Buff Magic earned testers Recommendation for niche categories.