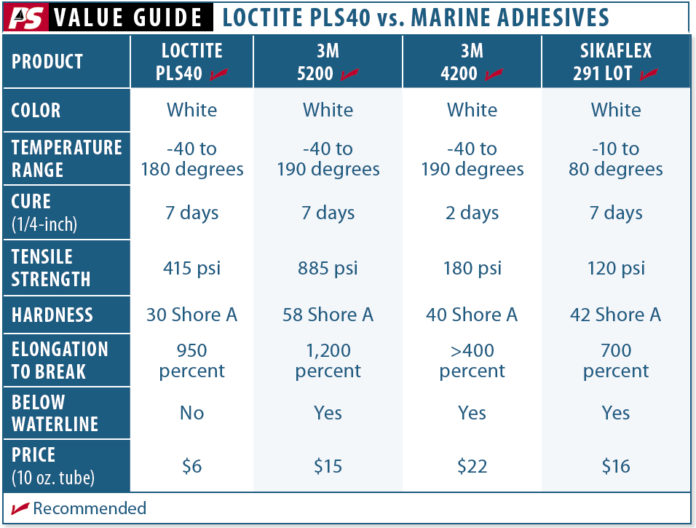 We usually use 3M polyurethane caulks for boat projects: 5200 for permanent fixes, or 4200 if its something that might need servicing later. The 3M products are impressive but are too expensive for use around the house. About 15 years ago, while looking for something better than silicone and latex caulks for general use, I noticed Loctites PL line of caulks and decided to give them a try, thinking they might be useful for some onboard applications.

We first tried the Loctite PLS20, a self-leveling concrete crack sealer, on some leaks in the basement. The product seeped right in, curing to a very tough rubber that remains watertight five years later, despite continuing movement and passing winters. We imagine it might be very good for stubborn on-board deck leaks, but it is too runny for most boat applications. There also is a black roof and flashing sealant (PLS30) that, as far as we can tell, is exactly the same as the window, door, and siding sealant (PLS40), except that it is black.

The PLS40 sealant seemed just like 3Ms 4200, but with the slow cure of 5200; it is white, messy, and slow curing, but tenacious. While not manufacturer-rated for submerged service, the PLS40 did pass ASTM C1247, Standard Test for Durability of Sealants Exposed to Continuous Immersion in Liquids-perhaps Loctite is simply being very conservative. We used PLS40 to patch a fish-pond liner 10 years ago, and the fish are still happy. It carries a 20-year warrantee from a reputable company, and the manufacturer specs fall right in between 3M 5200 and 3M 4200.

After having success with these home experiments, we started using PLS40 on boats about 10 years ago. In practice, we simply cant tell the difference between it and marine adhesives; it bonds, cures, and handles the same. In really tough UV exposures, we see some weathering at 10 years-about the same as 3M 4200-but nothing close to failure. Inside the joint where it matters, 20 years of service seems realistic.

At just $6 for a 10-ounce tube, its affordable enough to keep a full size tube on hand for many uses around the house and the boat, and quit fooling with the overpriced, 3-ounce tubes. As any polyurethane user knows, once a tube is opened, even if the tip is well sealed with aluminum foil and kept in a cool place, it is still only good for about two months.

Tip: If you have an off-season project requiring polyurethane, and the adhesive just won't cure in a dry, heated winter house (water is the curing agent for most polyurethanes), place the project in a large cooler or other sealed container with a damp towel and a heating pad. It will cure just fine, like its summer. Polyurethanes require warm, humid conditions to cure properly.

Bottom line: We still recommend premium 3M and Sika adhesive products for critical applications (see PS August 2010 online), but with characteristics between 3M 5200 and 3M 4200, the Loctite PLS40 has not let us down, and it costs one-third of the price. At the very least, we Recommend trying it at home. 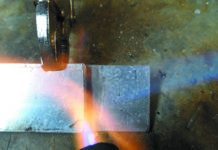