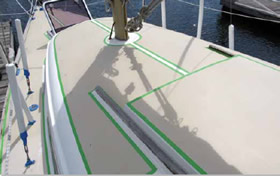 Your tape test (PS, October 2013) did not include 3M 256, but I thought Id pass on a lesson learned to your readers. Having recently completed painting my deck, for the first time in 37 years, I encountered an unforeseen problem.

Thinking that higher-priced tapes were better, I purchased 3Ms 256 ($22.50 per roll) from Defender Industries (www.defender.com). Unfortunately, the retailer repackaged the tapes in Ziplock bags from its wholesale purchase, and it did not include any specifications or instructions with the repackaged product. Using the 3M 256 resulted in a beautiful edge, but I left it on, in the sun, for two to four days. When it came to removal, the tape separated, leaving all the adhesive on the deck. After contacting 3M, I learned that 256 is not for outdoor use. Using industrial-strength 3M Adhesive Remover ($38 a can), it took four hours to remove the tape and adhesive. So, buyer beware: Read spec sheets before buying tape.

I noted your article on diesel additives in the August 2013 issue. Many fuel docks in the my area have been offering only Valvtect diesel fuel, which claims to have all the additives needed for good diesel-engine operation and fuel storage. Ive been using it exclusively for about two years.

Have you evaluated this fuel? Does Valvtects fuel contain the same anti-corrosion additive that you tested? Your article gave good marks to their additive, particularly for aluminum tanks, which my boat has.

We tested (and Recommended) Valvtects BioGuard ULS, and according to Valvtect President Jerry Nessenson, the companys marine diesel is formulated with BioGuard Plus 6, a multifunctional diesel biocide that includes a fuel stabilizer, corrosion inhibitor, moisture dispersant, lubricity improver, as well as a biocide. Weve not tested Valvtect marine fuel.

I bought an Achilles dinghy seat from an online retailer this past spring. The cushioned dinghy seat has several pockets under the seat where I was keeping my air and water pump, boarding ladder, flashlight, and engine key for my new dinghy. After one season of use, all the metal zippers are frozen in place from salt corrosion and fall apart if you attempt to move them. A representative of the online retailer suggested the product was only intended for use while you were on the dinghy and that the seat and everything in it should be taken off when not in use. Ridiculous.

I contacted the retailer, and they sent me a new replacement bag, but it has the same poor-quality zippers. It was a good product for the short time I used it. If the manufacturer had used heavy-duty plastic zippers and slides, it would be a great product, but it should not be sold to anyone for use on salt water.

Anemic, metal zippers on marine gear are a pet peeve of ours as well, and theyve often been the reason products ended up in our Gear Graveyard. Unfortunately, like Achilles, many marine manufacturers use them on gear that will see saltwater duty, so be sure to check out our online archive for tips on protecting zippers from corrosion with products like Shurholds Snap-Stick (PS, November 2009). To un-stick corroded zippers, try using vinegar; see the September 2009 PS Advisor for specifics. And if you just can’t free a frozen zipper, there’s always the Zipper Rescue Kit (PS, Dec. 1, 1998) from ZRK Enterprises, www.zipperrescue.com.

Ive not used desiccan’ts aboard our boats, but after reading your dehumidifiers review (PS, June 2013), I thought there probably were other options worth review. The broader RV market came to mind as RVers deal with comparable cabin-moisture issues.

For a larger boat docked with 110-volt power in temperate winter, the Sunpentown SD-014V Desiccan’t Dehumidifier looks useful. Like some large-scale, industrial systems, it uses a desiccan’t wheel and no compressor. When a portion of the wheel nears saturation, the wheel rotates through a hot-air stream and is dried out and re-activated. It retails for about $252 (with shipping) online. Its power demand would likely require a full-time power cord or large solar capacity.

Aboard our boats, which winter on Chesapeake Bay, I use one or two 4-inch Nicro solar vents per cabin and cover two-thirds of the boat with a loose-fitting tarp over the boom, but we still get some moisture and mildew problems.

I came across a product that is something PS readers would probably like to have you test: Liquipel. It is an aftermarket process where a carbon-based hydrophobic gas is injected into and onto a device, and Liquipel (www.liquipel.com) claims it becomes 100 percent waterproof. Any chance you can check it out for us?

Having electronics covered and injected with a waterproof coating is certainly an interesting concept as an alternative to waterproof cases likes those we tested for smart phones and digital tablets (PS, November 2012). Well look into testing it, but we’d like to hear from any reader who has tried it; email practicalsailor@belvoirpubs.com.

I read your review of the General Ecology Nature-Pure QC2 water system in the October 2013 issue. We purchased a system three years ago at the Annapolis boat show. It is one of the best items added to our boat. We were tired of lugging bottled water to the boat and really didn’t like the chlorine taste. (We have well water at our home). We have gotten three years from the filter, and will be replacing the filter in the spring. In our opinion, it is a fantastic product and does everything it advertises. Also, if you contact General Ecology (www.generalecology.com), they return your emails very quickly, and there is now a distributor in Canada as well. Great product!

I enjoyed your editorial (PS, August 2013) and agree with you on the importance of preserving night vision, but you missed one critical element: the color of the light. We all know that slipping a red filter into our flashlights makes them OK for use at night (as long as its not too bright), but few know that its not the color of the light that matters; its the colors that are not in the light.

Red filters eliminate blue and UV light, which have the most detrimental effect to night vision. Also, while the night mode of most marine electronics does effectively eliminate blue wavelengths of light, few consumer devices (e.g. iPhones) have this ability.

Lowbluelights.com has filters designed for various electronics, but these can get pricey. The best solution is to avoid using anything that contains blue light. (Note: All white light contains wavelengths of blue.) If however, you can’t resist using your iPhone, or need to turn on those bright spreader lights at night, a cheap and (mostly) effective solution is to wear Blue Blocker sunglasses or safety glasses with a yellow tint.

In regard to your article, Whats in the Practical Sailor Toolbag? (PS, January 2012), I would add another important item to the checklist: a very strong magnet that can be attached to a string to fish out any steel tools or screws that have dropped over the side. I spent less than $10 for such a magnet and was able to retrieve a socket wrench that had cost me more than twice that much. Since then, I have rescued additional screws and metal pieces that slipped from my hands.

Several dealers and boating customers of Kanberra Gel products have emailed me about Practical Sailors failure to include it in your recent review of mold and odor treatments (PS, November 2013). Kanberra has been a brand in the marine industry for five-plus years. We virtually created the category of natural mold and odor eliminators, put countless resources behind proving to the marine industry the viability of a natural tea tree oil product, and have led the way for boaters and liveaboards to enjoy better air quality while boating. Both Forespar and Pur-a-fy Air Gel, which you included in your review, were created after Kanberra.

Being that Practical Sailor is committed to testing products for the serious sailor, and relied upon to be thorough by those same sailors, it is surprising that you would omit such a successful product. I would appreciate an opportunity to have Kanberra tested by PS.

Our recent mildew-treatment evaluation was designed to compare different types of products (sprays, gels, solids, natural, chemical), rather than serving as a head-to-head brand comparison. That being said, an unfortunate reality of our product testing is that because of the sheer number of marine products available, its often impossible to include all product-category brands in one evaluation. However, we gladly conduct follow-up tests of new and overlooked products. Weve requested Kanberra Gel for testing and plan to run a test update in an upcoming issue.

Your September 2013 article on laser flares made the point that pyrotechnic distress signals present their own dangers, and suggested that the new-and expensive-laser flares may one day be a safer alternative. But you failed to mention that pyrotechnics are optional today. Non-pyrotechnic emergency signals have been permitted for several years by the Coast Guard, and are much cheaper than a $220 laser flare. In addition to various visual daytime emergency signals, automatic electric S-O-S signaling lights for night use are approved, can be purchased for less than $50, and don’t come with an expiration date. One may argue that a chemical flare has its place, but it certainly isn’t the only option.

The reference to pilot tube transducers in the November 2013 PS Advisor should have read pitot tube.

The November 2013 print edition incorrectly listed the Best Choice in the mildew-preventative article as Elite Marine Shield. It should instead have listed Goldshield GS5. For an explanation of the mix-up, see page 2 of this issue and the Nov. 4, 2013 blog post on www.practical-sailor.com.

RipRap
Where Credit Is Due