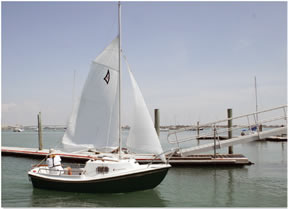 In regard to “What Can You Buy for Under $3,000,” the April 2011 review of the Venture 21: I cannot believe you didn’t mention the West Wight Potter! I have been a live-aboard and traveling Florida, the East Coast, and the Bahamas for about 18 beautiful years. It all started on my first sailboat, a 15-foot West Wight Potter, Lollipop, sailing Lake Tahoe and the Sierras.

I could not believe I found such a fun trailer-sailer brand new for about $6,000, including a tilt trailer! That little boat taught me the basics of sailing and the pleasures of being on the water. When I sold her years later for about $3,000, she was still in as good a shape as the day I bought her.

I’ve certainly made some good and some not so good decisions on the water, but purchasing that Potter was a life-changing decision I will never regret.

In response to the May 2011 PS Advisor on plumbing a multi-pump bilge: The area of a circle varies as the square of the diameter? I was taught it varied as the square of the radius: area = Pi x radius2. The text does accurately say that doubling the diameter quadruples the area, only because doubling diameter also doubles the radius. I think the two hoses originally have a combined area of 2.21 square inches. A 1-inch hose has an area of 3.14 inches, about 50 percent larger.

In your discussion of plumbing a multi-pump bilge in the May 2011 issue, you correctly pointed out that the area of a circle varies as the square of a diameter. Then you prescribed a 2.5-inch hose to take the flow of a .75-inch and a 1.5-inch hose. The areas of the two feed hoses are 2.21 square inches, which could be more than accommodated by a 1.75-inch hose.

We should have been clearer on why we recommended a larger size. A standard rule of thumb is that it should be the diameter of the pump discharge-hose diameters combined. Although you can apply the geometric equation used to find the area of a circle (Area=Pi x r²) to determine a functional outlet diameter for two combined hoses, this yields a smaller diameter than the one we would recommend. Every boat has different challenges. To accommodate these and other variables, we take a conservative stance on hose sizes. The best way to plumb a multi-pump bilge is to have the setups completely independent. In cases where that’s not possible, we recommend that you simply add the circumferences of the two hoses to determine the final discharge diameter; this ensures that the second pump encounters no added resistance in the line. For example, if one pump has a ¾-inch discharge and a second pump has a 1½-inch discharge, you need at least a 2½-inch through-hull discharge (3/4 + 1½ = 2¼, rounded up to the next largest size) to ensure optimal flow if both pumps are running.

In the October 2010 Mailport, you published my letter regarding our 8-foot Zodiac Cadet’s oar locks, which would bend and break and had to be replaced every year. Since then, I have had a number of people ask where to find a long-term replacement for the oar locks, and I’ve finally found one: Big Island Inflata-Boats (www.inflataboats.ca) now makes and sells stainless replacements. They don’t lock in place, but the original Zodiac oar locks can be used as a locking stop.

I’ve attached a picture (See Right) of my Max Prop coated with Pettit’s Zinc Coat Barnacle Barrier (www.pettitpaint.com) and precious few barnacles. It’s worth noting that I launched the boat in the middle of April 2010, but I didn’t get to sail it until July. Then I only sailed it about 10 times before I hauled it just before Thanksgiving. I would think that if I was able to use the boat regularly, there would have been even fewer barnacles.

You’ll also note that there were a few barnacles that did grow but weren’t able to stick. I keep the boat in the middle-Chesapeake. All in all, I’m very pleased with my $18 can of Barnacle Barrier.

I purchased a new Zodiac Zoom inflatable dinghy last September, and over the past month, it was damaged by what appears to be bird talons. This occurred twice in one week, resulting in two parallel 2-inch-plus gashes, along with scratches running in a similar direction on the bow facing astern. I keep the dinghy on davits and hang it with the bow higher than the stern. My previous inflatable dinghy was not damaged in any way, and was hung similar to this new one.

Have you ever heard of anything like this? I thought the Zoom may have looked like a fish with the round black buttons on the pontoons, enticing an eagle. I placed a makeshift cover on the bow for a week, and have not seen any further damage.

That is a new one on us. If any other readers have a similar experience, please let us know. Send email to practicalsailor@belvoirpubs.com.

I was reviewing a back issue and ran across your review of pumps and problems with older type of pressure switches. Your comment that the cost of the pressure switch could be one third of the cost of the pump is right on. However, the cause of the pressure switch failure is typically a small micro-switch that can cost less than $3. Google on the switch number (for example, Omron Electronics’ V-15G-1C25-K), and you will get multiple sources for the switch. It takes maybe 10 minutes to replace it the first time, and under five after that. I keep at least three spare switches on hand and usually get a year out of them.

There’s something I’ve come across that might be of interest to your readers who are owners of Westerbeke W-13/18/21/27/33 engines with the original Sherwood 24143 raw water pump. The Globe Blue Run Dry replacement impeller No. 1130 does not fit due to the width of the keyway groove (3/32 inches). It appears to fit when installed and pumps water well, but after awhile, due to the woodruff key actually being only 1/16 inches thick, it will vibrate and eventually wear. This is not noticeable when fitting the impeller because of the friction felt when pressing the fins into the pump housing.

I’ve been using Murphy’s Oil Soap (www.colgate.com) on my boat for years—and not just on my wood decks. It cleans dishes—cuts grease and oil like a champ—and I wash my hair and body with it; it leaves hair shiny and skin squeaky clean. It has a pleasant smell, and it’s a fairly effective insect repellent. All this, and it’s biodegradable, too. A 32-ounce bottle costs just $3.

We have not yet tested Murphy’s Oil as a multi-purpose boat soap, but we’d be hesitant to use it on anything but wood, fiberglass, and vinyl—and we would be particularly hesitant to use it on hair and skin. Murphy’s Oil is a vegetable oil-based soap that is marketed as biodegradable and phosphate-free. However, it has a relatively high pH of 10.5, which means it’s potentially caustic to skin (warning labels says it will cause eye irritation), and it should not be used on metals like aluminum, brass, and bronze. Glad to hear you’ve used it without any problems. We’ll be sure to add it to our list of test soaps.

In 2006, I read your reviews on bottom paint (March and October 2006) and painted our Hans Christian with West Marine CPP (www.westmarine.com). I have not scrubbed below the waterline, and there is no growth other than just slime that quickly disappears when we’re sailing in a half-gale in Queen Charlotte Strait off Vancouver Island. Our waters up here are 46-50 degrees year-round.

Glad the CPP is working for you. Although it’s likely been re-formulated since 2006, it is still doing well in our panel tests and was a recommended product in the March 2011 report. Made by Pettit, West Marine CPP scored a Fair rating after 18 months of testing in Sarasota Bay, Fla. Look for updates on its performance and other paints in the October 2011 issue.

I really appreciated your editorial on and review of the MacGregor Venture 21 in the April 2011 issue. From 1970-1972, I had a partnership in a Venture 21, which we sailed out of Redwood City, South San Francisco Bay. My buddy Pete Havens and I learned to sail on the V21 and had many wonderful adventures. We both had sports cars, and it must have been a stitch to watch us pull the boat on its trailer with a Porsche or Fiat Spider. We ultimately sold the boat, and it was almost 30 years later before I found my way back to sailing on San Francisco Bay with an Islander Bahama 28 and later a Cal 39. I’ve since moved to the Eastern seaboard and now cruise aboard a Cabo Rico 36. It’s a far cry from the Venture, but I remember her wistfully.

There have been many recommendations is these pages about the best reading books for sailors. I would like to nominate the worst: “Racing Through Paradise,” by William F Buckley Jr.

It is easily one of the most annoying sailing books I have ever read. Nominally, it describes his cruising adventures aboard his 71-foot, steel ketch Sealestial in the early 1980s. What it really describes, in my opinion, is self-absorbed, name-dropping snobbery that provides evidence that sailing is really an elitist pastime for the wealthy.

Look for our suggested summer reading list in next month’s issue. We hope you’ll find the books more pleasing than you found Buckley’s tome.

I use a product called Biogreen Clean (www.biogreenclean.com) on my boat and at home. It’s $90 a gallon and is a concentrate. It will clean just about anything and is biodegradable. I would love to see how it compares to other boat soaps and green cleaners.

We’ll add it to our growing list of boat soaps to test. Stay tuned for the report.

I recently upgraded from a roll-up dinghy (50 pounds) with a 2-horsepower motor (25 pounds) to a Walker Bay 310 RIB (135 pounds) with 10-horsepower motor (90 pounds). This is a very heavy combination, and I am wondering how others manage dinghies like this, particularly when taking them to shore. I would like to be able to handle the dinghy on my own. Do transom wheels really work? Any experience with the Anchor Buddy (www.tuggyproducts.com) that holds the dinghy offshore? In our area, there is significan’t tidal range and beaches can be sandy or rocky.

Many boaters have had good luck with transom wheels, aka dinghy wheels, but there are many of varying quality and price to choose from. We’re putting together a test of dinghy wheels now. If you have any particular wheels you’d like to see tested, let us know; email practicalsailor@belvoirpubs.com. Also, be sure to check out contributor David Liscio’s do-it-yourself dinghy-wheel project in the May 2011 Mailport section and our review of the Flip It Wheels made Denard Marine (www.danardmarine.com) in the Feb. 1, 2003 issue. We have not yet tried the Anchor Buddy.

Product Update
Where Credit is Due