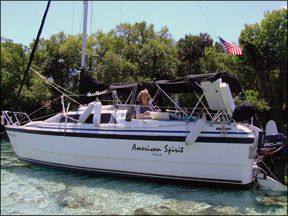 I was disappointed to see in the August 2010 issue that you published a letter without an editorial caveat regarding the disparaging remarks about MacGregor boats. The author’s obvious dislike of the boat seemed compounded by the caption placed under the Hunter 27E Edge.

This attitude seems to reinforce the snobbery of boaters regarding boats that are less expensive or appeal to a specialized group. It seems we have enough challenge interesting the younger generation in boating—sailing in particular—without snide remarks about boats that are more affordable to the younger and/or the less well-heeled.

I am a seven-year MacGregor 26X owner. I find it the ideal boat for my location, family, stage of life, and pocketbook. It is a real boat, and for the money, it allows many of us to enjoy safer pocket cruising and visit many more trailerable locations than we would otherwise be able to visit. Visiting www.macgregorsailors.com will give folks an idea of the positive experiences and pride of ownership that the vast majority of MacGregor 26X/26M owners enjoy.

In regards to your look at paint preservers in the June 2010 issue: As the owner of both a wooden boat (Nordfarer yawl) and a bleach bottle (Tartan 33R and formerly a South Coast), I put my two decades of chemistry teaching to use. For $2, you can buy two or three empty, new with lid, quart cans. Transfer the unused paint from the original can into the new, empty quart can. Put a dot on the lid with a felt-tip marker, and write the name and date on the side of the can. Then can the gallon can.

Another reader, Chris Waln, wrote us with another simple paint-preservation method: well-sealed clear kitchen wrap over the can. It won’t work with volatile solvent-based paints, but if the product allows application with foam brushes, this method should be safe.

I have read on Inside Practical Sailor that you are working on a review of integrated nav systems. I think it would be interesting to, at the same time, do a fresh look at electronic cartography because it seems to me that there are so many new features now with everyone claiming 3D view and satellite view and so on.

Traditionally, cruisers exchanged paper maps. Digital cartography is changing all that because the maps often are encrypted and can’t be exchanged between users. So you have to start with all the maps you think you might need! (Just try to go on the Navionics, Blue Chart, or C-Map websites and try to figure out which charts you need for an international route; the task is daunting.)

C-Map does sell the complete world maps for $12,000, but if your route uses just 5 percent of the worldwide charts, then you’re spending way too much.

Also, it appears that if a device is using C-Map charts, it cannot support another type of cartography at the same time. It is totally ridiculous that the company is working against the needs of sailors to have a choice of cartography and the security of navigating with multiple formats.

The main mood in the industry seems to be that if you have old maps, just throw them away and start new with us.

Settling in to my easy chair with a good cigar and the August issue of Practical Sailor, I was all set to enjoy your latest boat review of the J/95. Until I read the first paragraph. It is, perhaps, a minor point, but one that us software geeks cannot in good conscience let slide by: “…we were surprised to learn that J/Boats—known for its measured approach to the boat business (don’t let that radical backslash fool you)…” It’s a forward slash, not a backslash!

Aside from the above deficiency, I enjoy your publication immensely. With that off my chest, I look forward to resuming the August edition.

Concerning your teak deck cleaner test (May 2010 and March 2008): I have been using Sudsy-Ammonia all-purpose cleaner available at King-Kullen supermarkets. I find the product to be excellent in cleaning the teak to its original color and in ease of application (mix with water, brush on with scouring pad, and rinse). It is also the most economical product readily available.

We are owners of a Zodiac Cadet high-pressure bottom 8-foot dinghy, and we cruise extensively in the Pacific Northwest. The Zodiac was bought new just over three years ago, and we have had to replace both oar locks every year at $25 a piece. The first pair was covered under warranty, and we were told that the dinghy was not designed to row.

This summer, we could not find oar lock replacements: They were sold out everywhere. Our local inflatable dealer suggested checking West Marine since Zodiac makes the West Marine dinghies, but we got the same story. I also got feedback from many sailors with the West Marine version of the boat who were having the same problem.

At present, I am having a set of oar locks made from aluminum and have seen some out of stainless. I love everything else about the dinghy, but most sailors do row their dinks. For now, we just slide the oars through the boat handles; works quite well.

Practical Sailor contacted Zodiac (www.zodiacmarine
usa.com) and West Marine (www.westmarine.com) about your experience. The companies reported that they have not seen many of these fail since the oar lock system was redesigned in 2002, when a stainless-steel center pin was added and a cold-molded joint was changed. Zodiac suggested that the failure could be attributed to trying to row the dinghy when it was under-inflated or the oar lock’s stem not being seated properly. As to the replacement parts issue, West Marine said their distribution centers are currently out of stock as the oar locks, which come from Zodiac, have been back ordered for awhile; they expect to have some by month’s end. In our opinion, your best bet is the custom-made route you’re taking.

My results using an iPhone 3G and Navionics charts were similar to those reported in your April 2010 article. The charting is excellent, but the GPS performance is spotty.

Our new iPhone 4 changed that, giving us quick GPS locks and stable performance suitable for live navigation. In fact, we used it extensively this summer while sailing and racing in Barkley Sound, Vancouver Island. Much of the time, the presentation was more useful than that on our 2002 chartplotter. The Navionics app would be even more useful if it had the option to orient according to compass heading as the iPhone does the maps application.

In reference to the June 2010 PS Advisor on OEM oil filters: I too grew tired of getting the runaround from my local engine dealer for oil and fuel filters for my Universal M-18. The ones I needed were never in stock and had to be special ordered—and I paid the shipping.

I took a little paint thinner to an OEM fuel filter and found it was a plain Baldwin filter that I could buy at an autoparts store for $4. The oil filter was a little more difficult to read, but I got a number that cross referenced to a Fram filter. Volvo might have filters made to their specs, but others use off-the-shelf filters with their paint applied.

I just finished reading the excellent article on adhesives in the August 2010 issue. But I couldn’t find a description of the “immersion test.” What exactly did it entail?

For the immersion test, cured sealant beads on cleaned FRP coupons were placed in a ambient temperature (70-90 degrees) batch for three weeks before testing to destruction. Manual pressure was placed on each bead of caulk, and the failure mode was noted. Most beads sheared, losing surface adhesion; as noted in the review, a few demonstrated cohesive failure of the material. Five test rounds comprised this part of the evaluation.

The Kiwi Prop (www.kiwiprop.com) should have been included in your response to a reader’s request for information about feathering props for his Cal 29 (Mailport, August 2010).

I installed a Kiwi Prop on my Beneteau First 375 three years ago, and it is instantly responsive in forward and reverse and fully feathering while sailing. The most remarkable aspect is that it goes to full reverse pitch when I call for it, which allows me to safely maneuver in places others find difficult or impossible. And its price is a fraction of that of the other units mentioned.

I was disappointed that you didn’t mention Flexofold props (www.flexofold.com) in your reply to a reader letter in Mailport August 2010. Flexofold props are reasonably priced, well made, and quite efficient in reverse. I’ve had them on two boats, a Ranger 33 and a Freedom 36, and I know others who are pleased also. Unlike the inefficient flat or skinny blades of other folders, these look like real props with good blade area, proper twist, and a simple, rugged gear system that ensures both blades open and close together.

We’ve heard positive reports on both of these props, though we’ve never bench-tested either. The J/95 we reviewed in the August 2010 issue was fitted with a Flexofold, and testers found that it performed well during the brief boat test. The Kiwi Prop was featured in an Ocean Tested report in the February 2007 issue. PS contributor and bluewater voyager Andy O’Grady, who installed a feathering Kiwi Prop on his 42-foot gaff-rigged double-ender, determined that the Kiwi Prop was a simple, excellent piece of gear that he highly recommends. O’Grady reported that the prop had excellent performance, even in reverse, and that the company offers great customer service.

In regard to your August 2010 article on marine sealants and adhesives: On balance, an excellent, comprehensive review with an impressive testing program. Based on 27 years in the boat-repair business, I would offer the following: 1) I look at sealants and adhesives as having two very different roles; Life Caulk and low adhesion polyurethanes work as excellent sealants when used in conjunction with mechanical fasteners. Parenthetically, white Life Caulk yellows with UV exposure; polyurethanes do not. Polysulfides are frequently incompatible with plastics used in instrument bezels, hatches, and skylights. High-strength adhesives also work well as sealants but, all too frequently, ensure that the underlying laminate, gelcoat, or that nicely varnished toerail will be destroyed or severely compromised when it comes time to remove and rebed. 2) The use of silicone as a sealant sounds good, but I think you should have placed more emphasis on its incompatibility with paint or gelcoat; typically, I aim for 100-percent squeeze-out when I bed a piece of hardware; without tedious and careful masking, silicone contamination is inevitable and it is difficult to clean up.

I strongly disagree with your recommendation that the highest-strength adhesives are the preferred choice for mechanically fastened hardware. If used in these applications, there will usually be collateral damage when replacing or re-bedding.

Each experienced craftsman develops a favored array of materials. As far as using high-adhesive products to bed through-hulls, stanchions, and handrails, we feel most leaks stem from bond failures, and we agree with manufacturer recommendations when it comes to keeping through-hulls and other critical hardware as watertight as possible.