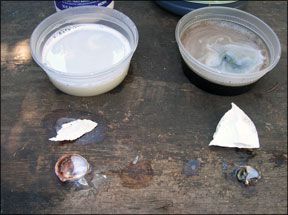 In the November 2007 issue, we reviewed a big batch of waterline stain removers/hull cleaners. Spray Nines gel got the nod over the 21 other products, but there were a number of Excellent results-and thats because these acid-based cleaners don’t mess around.

One of the most aggressive cleaners out there is the MaryKate On&Off, which received an Excellent rating and was a Recommended product. Made by CRC Industries, it is a caustic stew of acids, mostly hydrochloric (20 to 25 percent by weight) and phosphoric (5 to 10 percent), with a bit of oxalic (1 to 5 percent). Weve used it often, with good results, but it only would be considered pleasant if youre nostalgic for World War I trench warfare. Even outside in a breeze, it stings the eyes, nose, and breathing passages. If you work without a respirator-not recommended, but sometimes done-you need to hold your breath when in range of the fumes, and take new breaths upwind. (Its best to wear a respirator, rubber gloves, and eye protection.)

Also in the November issue, in Mailport, there was a letter from David Shepherd of Hope Valley, R.I., extolling the virtues of a product called Rydlyme Marine for cleaning barnacles off the hull. He noted that it was a bit more expensive than On&Off and other acid-based cleaners, “but its benign characteristics, biodegradability, and overall stellar effectiveness make it well worth the extra money.”

We called the folks at Rydlyme Marine, who sent us a sample batch, along with a plastic cup and a little white seashell, which they encouraged us to submerge in their product.

According to its material safety data sheet, Rydlyme Marines main formula is “proprietary, confidentiality required.” It has one hazardous ingredient, aqueous hydrogen chloride (less than 10 percent), which in higher concentrations can be caustic to eyes, skin, and mucous membranes. But Rydlyme is completely biodegradable, and according to its makers, it is gentle enough to handle with bare hands. In the course of working with it for several days, testers never experienced any irritation. It has a smell that reminded us, variously, of salt, chlorine, iodine, and hydrogen peroxide.

We put the Rydlyme Marine in the cup and submerged the shell. The brown liquid foamed for a while, looking much like Guiness Stout pulled from the tap, and within a few minutes, the shell was no more.

We had a hard-bottom dinghy that was exhibiting just the right brown stain, having been left in a warm tidal river for about two weeks during the summer without bottom paint.

Now, MaryKate bills On&Off as a hull cleaner, but diesel mechanics often use it to descale and de-calcify heat exchangers. In fact, last summer, On&Off did a good job on a heat exchanger aboard one of our test boats (see photo, page 22). Meanwhile, Rydlyme Marine is billed as a descaler and heat exchanger cleaner, and makes no claims about hull stains.

We sectioned off a portion on the dinghy bottom that had a uniform stain, making a sort of tape corral for the two products, and raised a tape barrier in the middle to prevent cross flow. Then we brushed a liberal coating of each product on the two sections, took a photo at one minute, waited two more minutes, then flushed the area with fresh water.

The On&Off got better results at one minute, hands down. After the rinse at 3 minutes, the Rydlyme closed the gap significantly, but never quite caught up. We finished the cleaning with the On&Off, and were interested to find that it did not do as well with the surfaces already treated with Rydlyme Marine as it did by itself on raw surfaces.

We did several shell-dissolving experiments with On&Off and Rydlyme Marine, both used full-strength. Why did we melt shell? Because calcium carbonate is one of the main fouling culprits in heat exchangers, and probably the toughest of the various animal and mineral elements making up the “scale” that typically fouls heat exchangers, especially on the raw-water sides.

We tried melting large, equal-sized pieces of heavy quahog (chowder clam) shell. These were tough for both products to chew on. Three- and 10-minute tests were not definitive, but On&Off seemed to work a bit better. We then tried smaller pieces of quahog, and the On&Off was the clear winner.

crepidula fornicata, never fails to make our less-mature bottom paint testers snicker when test panels are found with quarterdecks mounted in masses on the unpainted areas.

The results here were contrary: The Rydlyme Marine chewed up the crepidula much faster than the On&Off. Go figure. As a sort of follow-up, we put equal-sized quahog chips into fresh batches of the solutions and left them overnight. In the morning, there was nothing left of either shell.

MaryKate On&Off fulfilled its promise as a hull cleaner, and worked faster, if no better in the long run at the shell-melting. Its a proven descaler, but harsh, very harsh.

Rydlyme, too, lived up to its billing as a descaler. It took longer to get the job done, but did it without traumatizing eyes or air passages. Wed give it as strong an endorsement as we did a similar planet-friendly product called Barnacle Buster, from Trac Ecological, back in the May 2007 issue.

Some of you may be familiar with another eco-friendly product, Marsolve, which we reviewed in the May 1, 2004 issue. Marsolve is no longer available, but its formula was similar to that of Rydlyme Marine. Both products were made by the same manufacturer.

If you need to get the job done in a hurry, and are willing to put up with caustic fumes, responsible containment of acids, and a trip to the local HazMat station, use MaryKate On&Off. Its a chemical beast.

If you can wait a few minutes longer for the same results, use Rydlyme Marine. Thats what well be doing in the future.