Shortly before this issue went to print, Practical Sailor learned that Irgarol, a pesticide commonly used as a boosting agent in antifouling paints, is in short supply in the United States. Although we have not fully investigated the ramifications of this news for boat owners, it seems likely that the supply of paints containing this pesticide will be exhausted sometime this year.

Bottom paints containing Irgarol are usually marketed as having a boosting agent that enhances the paints protection against algae, soft growth, or slime, and are priced around $30 higher than similar formulas without Irgarol. Interluxs Micron Extra with Biolux, Pettits slime-resistant SR formulas such as Trinidad SR and Ultima SR-40 (and SR-60), and Blue Waters Copper Pro SCX paints such as Copper Pro SCX67 (hard and ablative) are examples of these paints.

Given the shortage, it is possible that bottom paints formerly touted as having slime-resistant formulas will no longer contain Irgarol 1051. It is still not clear how manufacturers will handle the naming of these products, but in the past, some manufacturers have changed the formulas of their paints without changing the names.

This means that buyers will have to look at the active ingredients to determine whether a paint touted as slime resistant actually contains Irgarol 1051. As required by the U.S. Environmental Protection Agency, Irgarol 1051 is prominently listed in the active ingredients, usually under its systematic name, N-Cyclopropyl-N-(2-methyl-2-propanyl)-6-(methylsulfanyl)-1,3,5-triazine-2,4-diamine.

After several years of testing paints containing Irgarol, our own findings indicate that paints with Irgarol will be of most value to seasonal sailors who paint their hull every year but do not regularly clean it. In our tests, Irgarol has not been shown to extend the active life of antifouling paints, and weve had a hard time discerning any enhanced slime resistance in Irgarol-boosted paints after six months in the water.

If you are a long-term, warm-water cruiser who cleans his or her hull, we don’t see any real benefit of paying extra for a slime resistant paint containing Irgarol. The fact that some paints touted as slime-resistant might not even contain Irgarol offers one more reason to stick with conventional copper paints this season, or those boosted with zinc pyrithione, ZnP, also called zinc omadine. Zinc is a naturally occurring mineral and is found in a wide range of healthcare products, including sunscreen and diaper cream. The paints containing zinc are often among the top-rated antifoulants in our test

Irgarol is in the family of triazines, and is one of several boosting agents introduced by manufacturers after tributyltin, a suspected endocrine inhibitor found to be harmful to marine life, was phased out. We were told that the reason for the Irgarol shortage is that the manufacturer, BASF, has not taken the necessary steps to gain EPA approval to continue manufacturing in the U.S. Recent studies have called into question Irgarols safety, and it is unclear when the manufacturer will meet the EPA requirements.

BASF, headquartered in Germany, is the worlds leading chemical company. Irgarol was originally developed by Ciba, a Swiss-based company that is a leading supplier of chemicals used in plastics, coatings, textiles, paper, and home and personal care products. In 2008, the companies announced a merger, under which BASF would acquire all of Cibas outstanding stock for approximately $5.1 billion. In order to comply with antitrust laws in the U.S. and Europe, BASF agreed to divest itself from several lines of business. 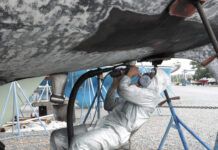 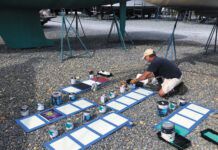 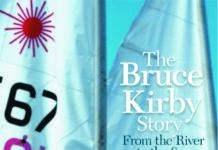