Wouldn’t it be nice if you could have a rust-proof boat? In search of our ideal anti-corrosion coating, we chose the products based largely on their advertised claims and also on how easy they were to find. Among the products we tested for corrosion prevention: West Marine CorrosionPro Lube, CRC Heavy Duty Corrosion Inhibitor, Corrosion Block, Boeshield T-9, WD-40, CorrosionX, Corrosion X HD, Shark Hide, LPS 1, LPS 2, LPS 3, and TC-11 all popped up during Internet searches. We left out products that made no specific claims for use in the marine environment.

One of mankind’s greatest early achievements was the extraction of pure metal from rock. The process takes ingenuity and consumes vast amounts of energy. So it is with considerable frustration that we watch nature so easily reclaim what we have wrought at such cost. Few are more familiar with corrosion than mariners, who fight a constant battle against it in the salty interface between sea and sky.

A visit to the hardware store or a search on the Internet reveals no shortage of products to address, and even redress, corrosion-most are touted as being able to penetrate (“frees rusted parts”), lubricate, or protect electrical components. Here we examine the corrosion-inhibiting properties.

We chose the products based largely on their advertised claims and also on how easy they were to find. Several are available in hardware stores. West Marine carries its private-label product, CorrosionPro Lube, as well as CRC Heavy Duty Corrosion Inhibitor, Corrosion Block, Boeshield T-9, and WD-40. CorrosionX, Shark Hide, the LPS products, and TC-11 all popped up during Internet searches. We left out products that made no specific claims for use in the marine environment. Anything that had “rust” and any reference to “marine” or “boats” or “salt spray” was fair game.

Each showed different degrees of viscosity, all went on wet, and most stayed wet, or at least tacky. Those that left a waxy

coating performed the best in the saltwater test.

None is pleasant to use and all of their containers carry stern warnings about flammability, use in poorly ventilated areas, and against inhaling them. Most use heavier-than-air butane, pentane, or heptane, or a mixture thereof, as propellants, which means theres a risk of an explosive mixture accumulating in confined spaces, such as bilge compartments. Ventilate these areas thoroughly before operating anything that might create a spark.

The LPS products use carbon dioxide as propellant, and Corrosion Block nitrogen, but the solvents are still flammable.

According to its maker, Boeshield T-9 spray is for penetration, moisture displacement, lubrication, and rust and corrosion protection. Its relatively heavy and dries slightly tacky.

The T-9-coated strip sprayed with fresh water was rust-free after a week. The one submerged in salt water had rust around the screw and at the top after three days. The trend continued through eight days, with more corrosion on the cured side (see sidebar above) than on the uncured side.

Bottom Line: In terms of what our test covered, T-9 works as advertized, even in salt water. Slightly more corrosion at the screw and price edged it out of the top three.

Advertised as a corrosion preventer and inhibitor, Corrosion Block is a heavy, blue spray that dries thin, clear, and slightly tacky.

After seven days of freshwater dousing, the Corrosion Block-coated strip showed some rust spots at the top, where wed expected a thicker coating. The saltwater strip, however, was very rusty after three days-except for an area toward the top. After eight days, it had rust all over it.

Bottom Line: Corrosion Block is OK for freshwater purposes, but not salt water. To be fair, the manufacturer makes no claim regarding rust.

West Marine claims its product offers “…excellent water resistance and superior rust and corrosive preventative characteristics.” And it does.

This fine spray leaves a visible, amber-colored, waxy coating. The coating remained intact through a week of freshwater dousing, and the metal strip showed no signs of rust. The saltwater strip saw similar success: The coating remained after three days, and there were no signs of rust. It was only after eight days of saltwater abuse that some rust appeared along the “uncured” edge.

Bottom Line: This product does what it claims. The waxy film isn’t pleasant to the touch, but for hard-to-reach parts, its on the money.

CorrosionXs freshwater performance was excellent: After seven days, there was no rust and the film was still tacky. (So sticky, in fact, that a few small flies met their end on the metal strip.) Unfortunately, its saltwater efficacy rated at the other end of the spectrum. After eight days, except for a band at the top, the metal strip was very rusty, and particularly corroded around screw.

Bottom Line: CorrosionX works fine in a freshwater environment, but its not ready for brine time, especially in a mixed-metal situation.

Think of this as CorrosionXs big brother: A “high-performance, thick film version of CorrosionX,” according to Corrosion Technologies Corp. It comes out as a fine spray with some bubbles and a thick, amber color. 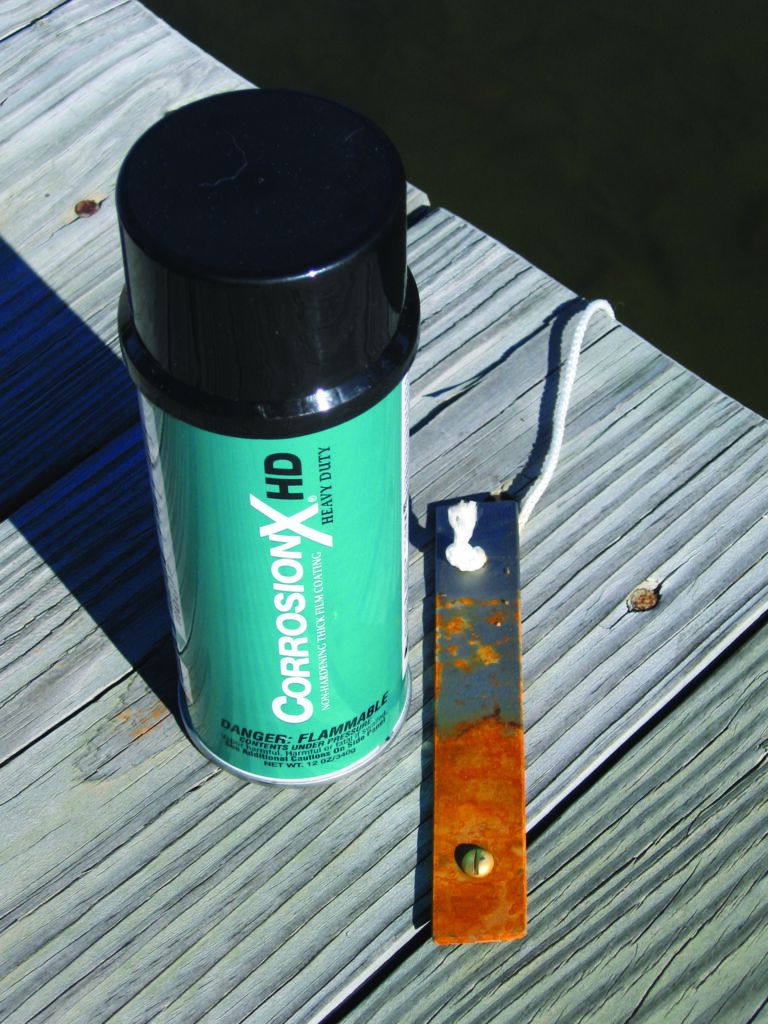 Like its sibling, we rated it Excellent in the freshwater test, but wasnt up to the challenge of salt water. The strip in saltwater had a rusty bottom half and a less-rusty top half, almost in proportion to the thickness of its coating. A clear halo appeared where the product accumulated around the nut, and curiously, less corrosion formed on the “uncured” side.

Bottom Line: The sticky film does resist freshwater penetration, but it isn’t immune to salt water, especially for the long term.

CRC Heavy-Duty Corrosion Inhibitor, which is seemingly identical in appearance and performance to CorrosionPro Lube, is made for saltwater use. It claims to protect and preserve metal surfaces subject to salt spray and high humidity. It comes out as a fine spray with a thick coating.

Bottom Line: Excellent performance. It lives up to its claims.

LPS Labs offers three products with three levels of rust protection. LPS 1 is marketed as a greaseless lubricant that displaces moisture. Colorless, it has a broad spray range.

In the freshwater test, the LPS 1 panel only had some rust on the uncured side after a week. After three days in salt water, the strip was very rusty, except at the top, and by Day 8, it had rusted all over. The brass screw also showed signs of rust, as though iron were being transported to its surface by galvanic action, there to repeat its demise (just a guess).

Bottom Line: LPS literature says the product displaces moisture on electronic components and that its light, greaseless film inhibits corrosion. It doesn’t claim to prevent rust, but it works for fresh water, if given time to cure. The broad spray pattern made it difficult to concentrate the product where it was wanted.

LPS 2 is touted as a multi-purpose lubricant and penetrant with added corrosion protection. Its a colorless, fine spray with a strong almond odor and broad spray pattern.

The freshwater LPS 2 panel had no rust after three days, but some after seven days; more on the “uncured” side. After three days, the saltwater test strip exhibited extensive rusting, and after eight days, it was completely corroded.

Bottom Line: LPS 2 claims to provide protection indoors for a year, and its performance indicates that as its limit. Not useful in salt water.

The strongest of the LPS series, LPS 3 claims to be a long-term, heavy-duty rust inhibitor, even in the harshest environment. Its bubbly, thick spray forms a waxy, pale brown coating.

Bottom Line: We tested it under “harsh conditions,” and it does what it claims-but its not pretty.

Shark Hide claims to be a protective coating against weathering and salt spray. Marketed mainly to owners of aluminum pontoon boats and similar craft, it lists steel among the surfaces it can be used on.

Unlike the other test products, Shark Hide is a thin, colorless liquid-not an aerosol-that wipes on with soft cloth. Its a thin liquid, and has really nasty solvents (toluene and xylene)-so be sure to apply it in the open air and wear gloves.

The freshwater test strip showed rust spots on the “uncured” side after three days. But there was no rust on the cured side, even after a week.

The saltwater panels uncured side was rather rusty after three days, but the other side had only mottled rust. Even after eight days, the coupon wasnt completely rusted.

Bottom Line: Sharks Hide works well in fresh water when allowed to cure. And it performed better than expected (Fair) in salt water for having such an invisible coating. Its easy to apply to large, smooth surfaces, less so to small parts like nuts and bolts.

TC-11 is the “complete answer for rust control,” according to its maker. The bubbly, blue-green spray forms a thick coating that was still sticky after a week of freshwater exposure. It kept the freshwater panel rust-free after seven days.

The saltwater panel did not fare as well: After three days, it had extensive rusting, and after eight days, only the very top was rust-free.

Nearly as ubiquitous as duct tape, WD-40 claims to protect against rust and corrosion.

Although the fine, colorless sprays coating was dry after a week of freshwater sprays, the panel had no rust. However, after three days in salt water, the metal strip was completely rusted, except the top. After eight days, only the very top was showing resistance.

Our saltwater test is admittedly harsh, and quickly produced results. After three days, most of the steel coupons were significantly rusty. Only three saltwater test panels showed no corrosion-those coated with CorrosionPro Lube, CRC Heavy Duty, and LPS-3.

Of the remainder, the Boeshield T-9 panel showed the least corrosion, followed by the cured Shark Hide. (The cured vs. non-cured results support the notion that it pays to follow instructions. Most non-cured sides mimicked the control panel.)

In the freshwater test, the Shark Hide remained rust free. It might be the answer for stainless steel rigging, stern rails, etc., because it leaves no sticky residue-however, its an expensive solution.

At 63 per ounce, CRC gets the Budget Buy nod. For day-to-day use, loosening sticky mechanical parts, or softening greasy deposits, WD-40 works and is inexpensive.

The perfect solution still evades us. Where iron-based alloys are unavoidable and stainless steel isn’t suitable, the best protection against the ravages of salt water is a coat of paint. Where paint isn’t an option, long-term protection against rust requires the use of sticky, dirt-attracting coatings, like the top performers in this test.