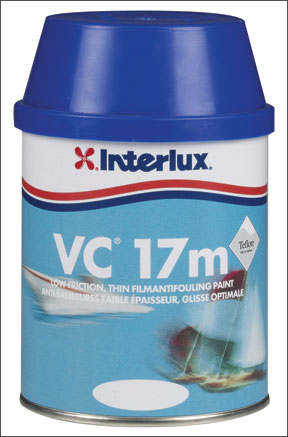 Today I went to paint the bottom of my boat with Interlux’s VC-17m, which I have used since it first came on the market. I had always cut/thinned the paint a bit with acetone. Today, the West Marine store manager (who is an experienced boater) told me that Interlux changed the VC-17m formula and that you should thin it with simple rubbing alcohol. When I used the paint with the alcohol, I noticed that it did not dry as quickly

as it had with acetone and seemed thicker than usual after mixing the copper powder. Is it correct that you can now use isopropyl (rubbing) alcohol to “thin” VC-17m antifouling?

We hadn’t heard that tip before either, so we asked Jim Seidel, assistant marketing manager at Interlux Yacht Finishes, about it. According to Seidel, the VC-17m formula was changed in 1999. The solvent formerly used was Tri-Chlor 111, which proved to be an ozone-depleting solvent. To maintain the drying speed and handling characteristics, Interlux went to an alcohol-based formula. The VC-17m thinner that the company now sells, called V-172, is a combination of isopropyl alcohol and n–propyl alcohol, in the same ratio as what is in the paint. The n–propyl alcohol cuts the resin better and is slightly faster than the isopropyl, Seidel said. Because the ratios in the V-172 match those of the alcohol in the VC-17m, Interlux recommends thinning the antifouling paint with the V-172 for the best results; however, isopropyl can be used.

I recently purchased an Airmar in-hull transducer. The installation instructions call for gluing the base of the unit to the inside of the hull, then filling it with propylene-glycol antifreeze. I have read that standing water in a bilge can lead to osmotic blistering. Wouldn’t the antifreeze, which is in permanent contact with the hull where the transducer is mounted, also pose a risk of blistering?

A hull’s vulnerability to blisters has a lot to do with the gelcoat, laminating resins, and process uses during construction, as well as what happens after the boat is launched. However, internal water tanks have been cited as a contributing factor. We’ve not heard any reports of propylene-glycol causing hull blistering, but if you are concerned about it, we suggest using mineral oil, a low-toxicity, non-conductive general-purpose coolant/lubricant. Airmar’s installation instructions for an in-hull P-79 depth transducer specify that mineral oil or propylene-glycol can be used.

(http://www.airmartechnology.com/) Note that this type of installation works only on non-cored hulls.