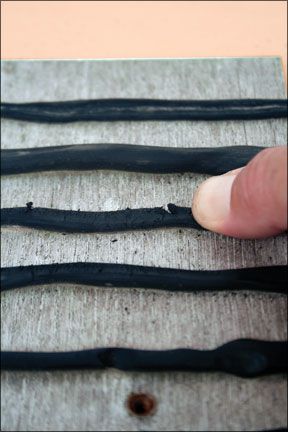 In June 2006, we began our test of seven caulks advertised for use in teak-deck seams. The goal was to evaluate each product on the four basic qualities anyone choosing a teak-deck caulk would want: ease of application, adhesion, durability, and resistance to chemicals.

The September 2006 issue reported on each product’s ease of application, and in the March 2007 issue, Practical Sailor rated the caulks on pliability, durability, and adhesion. In this update, we take a look at long-term durability and how each caulk reacts to multiple chemicals. Down the road, we’ll test the products’ strengths to failures and will rate the caulks’ overall performances, based on all of the previous tests.

Our caulk test group is a mix of polysulfide, polyether, silyl modified polyme 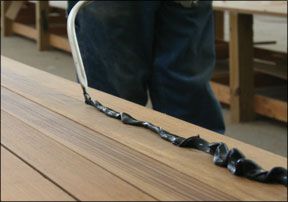 Noticeably absent are products from 3M and SIKA, both well known companies in the marine caulking arena that either do not have a product recommended for use on teak decks, or (in the case of SIKA) have one, but do not market it in the United States.

One of our primary goals was to see how well each caulk could hold up not only to the torture of ultraviolet (UV) rays, but to the chemicals that teak decks are likely to be exposed to during their lifetime. So, we applied a 4-inch bead of each test caulk to 16 different teak panels (8 inches by 4 inches), and then doused them regularly with the chemicals.

Thirteen of the panels were exposed to a single chemical; one was alternately exposed to each chemical; and another (our control panel) was exposed to no chemicals. Yet another—coated with a wood finish—was dropped from the test when it was obvious no chemicals were getting through the finish.

After a two-week curing period, all test panels were mounted outside, fully exposed to the weather, and given the initial chemical dose. Testers then applied the chemicals once a month for the following two years. The panels and each caulk bead were thoroughly saturated each time.

Our test was admittedly harsh—it’s doubtful any teak deck has been tortured to the extent our test panels were. But it was intended to determine which caulks held up the best to chemicals.

A number of factors come into play when deciding just what makes a teak-deck caulk the easiest to apply. Everything else being equal (product quality, durability, etc.), ease of application to us means a quick curing, one-part caulk requiring no special cleaners or primers (both of which can add significantly to the job in terms of money and time). Spending $18 for a 6-ounce can of seam primer plus the additional step required to prime each seam—and waiting for the primer to dry before caulking—are good examples of things that impact application ratings.

Similarly, a caulk that can be sanded after 24 hours is preferable. We also consider one-part caulks to be less of a potential headache than two-part caulks. Even though you follow the directions for mixing to the letter, there’s always that nagging worry it won’t cure properly, or—horror of horrors—you somehow manage to tip over the can during mixing. (You were mixing it on the dock and not the deck, right?) One-part caulks come pre-mixed in nice, safe tubes or sausages, helping us protect ourselves from such self-inflicted woes.

For this evaluation, testers scratched, poked, and probed each caulk bead with their fingernails, and then ranked each on its pliability, texture, and overall physical condition for each chemical panel. A rating of Excellent indicates the caulk was still firm, supple, and in excellent condition. A rating of Fair indicates that the product was still in decent shape, but that testers were able make permanent indentions in the caulk with a thumb nail and were able to remove some of it by scratching along the length of the bead. A rating of Poor indicates that large chunks of the caulk were easily removed with a thumb nail and that overall, the caulk’s condition was clearly inferior.

During our first caulk checkup (March 2007 issue), which was just eight months into our long-term evaluation, testers found that each of the seven products was holding its own with no signs of deterioration or damage. At that time, the softest caulk (West Marine Multi-Caulk) had the resilience of a neoprene wetsuit, while the hardest caulk (BoatLIFE Life Caulk) was slightly firmer than a pencil eraser.

However, now—two years after the application—testers found some eye-opening differences.

Life-Caulk is a one-part, polysulfide-based rubber compound advertised for use above and below the waterline on fiberglass, wood, metal, and glass. It’s not recommended for use on plastics.

It was in the middle of the pack in our chemical test, earning good ratings on most panels, but only fair on the acetone, MEK, and WD-40 panels. The Life-Caulk beads on those panels hardened considerably, lost some adhesion, and were dry to the point that chunks of caulk were easily scratched off.

Bottom line: At $19, Life-Caulk Type P was one of the more expensive caulks tested. As for chemical resistance and longevity, Life-Caulk rated Fair overall and was not at the head of the class after two years.

Teak Deck Sealant is a one-part, silicone-based caulk advertised as resistant to teak cleaners, teak oils, gasoline, and diesel fuel. The Teak Deck Sealant test beads appeared in good shape, but all of them—including the control—were easily damaged with a tester’s thumb nail. Most of them maintained their elasticity, however, the bead on the All Chemicals panel lost adhesion, and testers were able to scratch chunks off the MEK victim with little effort.

This product is a pourable, two-part polysulfide deck and hull seam compound advertised as resistant to teak cleaners, oils, fumes, gasoline, and diesel.

Testers found that the Life-Caulk Type P was holding up well after two years, rating Good on most chemical panels. The acetone bath did the most damage, however, the control panel bead still looked good—supple and not dried out like the BoatLIFE Deck Sealant.

MSR Deck Caulk Plus is a one-part, silyl-modified, polymer-based caulk. According to the manufacturer, it is permanently elastic between -40°C to 100°C, and is extremely resistant to UV, temperature extremes, cleaners, and exposure to fresh and salt water. Our test beads of the MSR Deck Caulk Plus are still in excellent condition, maintaining pliability and adhesion.

Bottom line: MSR Deck Caulk Plus lives up to its claims and is impressive even after two years of chemical baths. It’s one of our three top picks so far. MSR’s downside is the need to prime each seam, and the cost of the special seam cleaner ($12 a pint) and primer ($40 a pint).

Another top performer, the MARITIME test samples are still pliable and strong. All but one test bead received top ratings—the one that was doused with ammonia—and it still received a Good rating.

According to TDS’s literature, SIS 440 is a one-part, paste-like oxime cure system that forms a tough, flexible rubber compound; it does not sag during cure, and when cured, it has excellent temperature stability and chemical resistance. SIS 440 held up admirably to the onslaught of chemicals and cleaners. Testers gave it across-the-board Excellent ratings as it maintained adhesion and pliability without drying out or crumbling.

Multi-Caulk Sealant is a polyether-based caulk billed as a versatile, waterproof sealant for use in teak-deck seams, bedding fittings, etc. It can be used above and below the waterline; with fiberglass, wood, glass, and metal; and claims to be unaffected by teak cleaners and brighteners, and oils and fuel.

Multi-Caulk received a mix of ratings, Good to Poor, in the chemical resistance test and had a particularly hard time with motor oil, MEK, Murphy’s oil, ammonia, and the Fantastic. Although the Multi-Caulk beads were still somewhat pliable, many were easily scratched by our tester’s thumbnail. The control panel Multi Caulk, with no chemical interaction, was rated Good.

Bottom line: The West Marine Multi-Caulk performed in the middle of the pack in this test.

Although the challenges of evaluating in two years a product that should last seven to 10 years are readily apparent, we were still able to make some hard and fast conclusions about the caulks and whether we would or would not use them on our own teak seams, particularly considering the time and effort involved in the re-caulking process.

Two silyl-modified polymers, Teakdecking Systems and Bostik/Simson MSR Deck Caulk Plus, along with the silicone-based MARITIME, are our top picks for chemical resistance and durability at two years. We gave the TDS caulk the edge due to its slightly better performance in chemical testing, and its better pricing and availability.