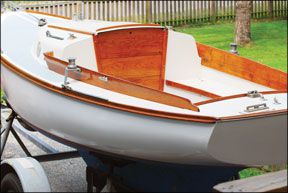 Last year, we launched a multi-phase topside paint evaluation in search of a high-gloss, easy-to-apply, durable coating for fiberglass hulls. We began in the August 2008 issue with a close look at application characteristics including handling ease, coverage, and gloss. This report moves the test into the next phase: performance at the one-year mark. Here, well take a look at the long-term paint panel test after one year with an inspection of the paints hardness, gloss retention, and the abrasion resistance of each of the products tested.

Depending on the type of topside paint used (and where the boat lives), a DIY topsides job can be expected to last one to five years. Practical Sailors last long-term topside showdown stretched on for four years with Interlux Toplac (white), and Epifanes mono-urethane (blue) and polyurethanes (blue and red) getting the all-star accolades in the May 2006 finale. A few coats of paint do wonders for a boat aesthetically, but they also protect the hull.

We tested multiple white paints and a handful of colored ones. Because reflectivity and gloss could be measured consistently among the white paint test panels, the white paints were evaluated on four characteristics (hardness, abrasion and stain resistance, and appearance).

However, colors are influenced by their hue and the rate at which their pigment absorbs light, so testers used only two of the four testing criteria (hardness and appearance) to compare the colored paints. But each brands white paint uses the same base chemistry as the color versions of the product, so we do get a measurement thats transferable-to some extent. (See “How We Tested.”)

After 12 months exposed to the New England elements, the majority of the test field was holding up admirably. Testers were pleased with how well the mono-urethanes maintained their luster, however, the two-part Interlux Perfection and Epifanes Polyurethane continue to outshine them, and the professional favorite, the two-part Awlgrip LPU, topped the performance charts.

As might be expected, the two-part cross-linking paints were harder, glossier, and more stain-resistant, but their application was also more difficult to control.

After a year of weathering, all coatings remain well stuck on the epoxy-primed test surface. Even the water-based Crabcoat paints showed no sign of chalking or adhesion problems.

Softer enamels can be expected to deliver about a season of shine. They typically oxidize a little over winter, and by spring, are ready for a light scuff sanding and a rejuvenating coat of alkyd enamel.

Products like Z-Spar 100 and semi-gloss 101 and Interlux Premium Yacht Enamel were easy to apply. Testers also were fond of the excellent coverage characteristics of Sherwin-Williams Seaguard 1000, Kirbys Hull and Deck Enamel, and Z-Spars 1195. All are reduced with mineral spirit-based solvent and are soft enough for easy sanding between coats.

After the year-long exposure test, we did notice that the enamels had lost much gloss, and Kirbys gloss white and semi-gloss white were closer in reflectivity than they were a year before.

The enamels fared as well as was expected with most of the paints rating “Fair” or “Good” in performance tests.

The harder one-part urethane-modified enamels are glossier, tougher coatings that look a lot like their two-part cousins but handle more like enamels. They are faster-drying paints and must be carefully thinned with specific reducers to retain good flow characteristics.

The high scores of some of the other mono-urethanes in the “appearance” test were derived from their even flow and user friendliness. In fact, our testers really liked the semi-gloss softer appeal of some of the one-part paints. (Several were rated “Very Good” for appearance.)

Bottom line: Mono-urethanes are middle-of the-road coatings, as far as application ease and durability. Recommended one-parts after one year are Interlux No. 4359 and K184, Pettit No. 3706 and 3175, and West Marine Sea Gloss Pro white.

The two-part linear polyurethane (LPU) products we tested were the glossiest of the test-panel bunch, but they also were the hardest to handle. They cured with a wet look that packed an automotive showroom brilliance. However, the downside of this high-reflectivity is the need for a smooth, dust-free application, and the extra effort associated with surface prep.

All of the two-part products we tested proved to be harder to brush on than the single-part paints. Interlux Perfection and Epifanes Poly-Urethane-both yellow paints in the panel test-came closest to the white Awlgrips deserved pick-of-the-pros status. Our real-world testing of the Epifanes and Interlux white LPUs support this finding as well, but testers tapped Perfection as tops for DIY application. (See “DIY Notebook,” page 18.)

Bottom line: If youre looking to get the longest life possible out of your topside makeover-and can tolerate the added work of applying a two-part LPU-we suggest the Fabula, Awlgrip, Interlux, or Epifanes.

When choosing the best paint for a boats topsides, be sure to consider the level of protection expected. If an owner plans to freshen up the paint annually, applying a two-part urethane would be overkill and a waste of money.

Conversely, the inexpensive, super-easy to apply enamel paints can’t be expected to last as long as LPUs. Paint choice comes down to what will meet the boat owners needs and skill for flowing on paint.

All of the paints recommended at the one-year mark are quality paints. Stay tuned to see how they fare at the next checkup, to be reported fall 2010.