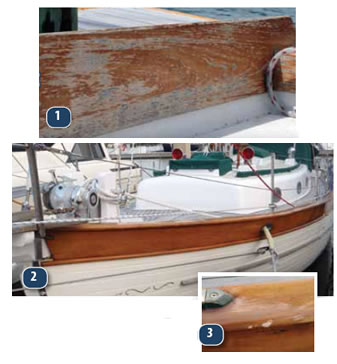 Practical Sailor often supplements panel testing with product challenges aboard our test boats to see whether top products still earn their keep in the real world and to try out new products. Two such evaluations are our exterior wood finish tests.

In the January 2011 issue, we introduced a head-to-head matchup of varnish alternatives—market-newcomer PolyWhey from Vermont Natural Coatings versus perennial favorite Interlux’s Sikkens Cetol Natural Teak—that had been applied to our Cape Dory 25 test boat. For that test, we’ve just let nature run its course: no band-aid touchups, no maintenance coats, no freshwater rinses, no TLC at all.

Comparatively, we’ve been testing Cetol Natural aboard our Chesapeake Bay-based Union 36 test boat, where it was laid on with the Cetol gloss overcoat in 2008; in this evaluation, testers have applied annual maintenance coats and given the coating regular TLC. Here’s the latest on both of these tests:

In the fall of 2010, testers applied three coats of Caspian Clear PolyWhey to the coamings and companionway trim on the Cape Dory, which is sailed several times a week and lives on a mooring in Sarasota Bay, Fla. We also applied Cetol Natural to the boat’s toerail, and previously had applied it to the tiller and forward hatch trim.

PolyWhey is a unique wood finish that uses whey protein, a by-product of the cheesemaking process, as a binder. It’s touted as a more eco-friendly and more sustainable coating than petroleum-based polyurethanes, which can have up to 75 percent more volatile organic compounds (VOCs).

Consistently among the top varnish alternatives in PS’s tests, Cetol Natural is not as muddy-looking as its predecessors, Cetol Marine Light and Cetol Marine—like the Caspian Clear, it allows the wood’s natural grain to show and has a low gloss.

As far as application, both the Cetol and PolyWhey are quick and easy to apply, with much shorter recoat times than hard varnishes and less (or no) sanding between coats. The main difference that we found in these two finishes was with durability.

The PolyWhey turned out to be a much softer coating than the Cetol. It held up for about two months, but after three months, it was in need of a recoat, and at six months, it needed a total takedown—and Cetol had emerged as the death-match victor.

The Cetol on the toerail was in need of a few touchups after six months, mostly in areas where fenders and docklines came in contact with it. But the tiller and hatch trim were still fairly well-protected almost a year after application. Although we’d recommend a maintenance coat at this point, testers plan to see how many more months we can eek out of the coating before we reach the point of no return.

Bottom line: We applaud VNC’s efforts to offer a “green” wood finish—and their creative recycling of dairy industry “trash”—but we can’t recommend it over Cetol for an exterior coating in the marine environment.

Testers applied three coats of Cetol Natural with Cetol Marine Gloss overcoat to the Union in March 2008. Once a year, we scuff it up with a 3M pad, give it a freshwater rinse, and brush on a maintenance coat.

Compared to a clear, glossy varnish, it looks decent and the maintenance regimen is more realistic for our tastes and available time. However, one downside to softer, varnish alternative coatings—even those with an overcoat—is that they don’t stand up as well as hard finishes to dings and abrasion. Example: The Union’s toerail has one place in need of touching-up where a fender line wore away the finish. (See photo above.)

Bottom line: The Cetol Natural with overcoat has held up very well. While applying the topcoat may mean added effort, both our panel tests and test-boat evaluations have shown that the coating will last much longer and need fewer bandaids if the soft Cetol is protected with the semi-hard topcoat.

Teak oils and other naturally based finishes like PolyWhey, need maintenance coats every few months. Their chemical cousins, however, like Cetol, have proven they can offer good protection with only annual nurturing and the occasional touchup.