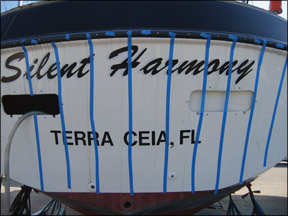 I use Collinte’s No. 885 Heavy-duty Fleetwax in the Chesapeake Bay area, and I’ve been impressed with how well water still beads each spring as I wash the hull in preparation for a new coat. But no matter how nice the shine, black streaks develop, starting with the first rain following waxing. I think

the boat would look better with no wax than with wax with black streaks.

We reported on black streaks and black streak removers in the May 2006 issue. Black streaks basically result from pollutants contained in rainwater. The effect is mostly caused by atmospheric deposition of combustion by-products that interact with acid rain. The culprits are planes, cars, and powerplants. Rain with a Ph less than 7 helps etch the residue into porous gelcoat, and the streaks become difficult to remove.

The black streak effect is worst leeward of airports and power plants, so if your marina is downwind of these polluters, you may want to check into a new berthing place.

We’ve never specifically tested a wax’s ability to resist black streaks; however, we don’t know of any finish that is immune to developing them, unfortunately. We’ve generally found that the waxes that bead water the best also resist staining the best. And Collinite’s 885 is among the top paste waxes we’ve tested.

Two of our waxed test boats, one in Florida and the other in Chesapeake, often break out in black streaks. The Florida boat has been waxed with the Collinite 885, and the Chesapeake boat was waxed with the 885 and Meguiar’s Flagship Premium. We’ve also had other test boats that were not waxed develop the ugly streaks. The difference we’ve seen is not so much in which finish gets black streaks, but which one makes it easier to clean them off.

According to Collinite’s Mark Taylor, since the streaks can’t be prevented, the best solution is to clean them without removing the wax you worked so hard to apply. He recommended Collinite’s cleaner-wax, Collinite No. 870 Liquid Fleetwax, to safely remove the streaks without stripping the previously applied wax. (Avoid cleaning the surface with a grease cutter.)

“The waxed surface does not attract black streaks, but rather exposes it,” Taylor explained. Because waxes protect gelcoat from damage, the black contaminants latch onto the wax, not the gelcoat. Without that protection, the contaminants will adhere to the gelcoat, eventually getting baked into it by the sun.