The goal is a mainsail that hoists easily and drops like a rock. A main that doesn’t strike when set loose can be a menace if the weather is pushing you or maneuvering room is limited.

Most important is a good mast track, clean and smooth, with no resident spider webs or wasp cells. Silky spider cocoons cause great problems. They collect lubricant, dirt, and oxidized aluminum. Sailmakers hate such debris; they call it “mast mud.” It’s the black stuff you find on your mainsail’s luff.

If the track is external and metal, you will, of course, have used emery paper to round slightly and smooth the sharp edges. The inside corners are difficult, but worth doing; they are the most likely to cause jamming because they take more load than the outside corners. It’s hard work, but need only be done once, when the track is new, and touched up from season-to-season. It makes a world of difference.

If you have a mast groove and plastic slugs, a clean, smooth groove is even more important, because it’s tight, and a favorite haunt of the above-mentioned bugs. It’s also difficult to inspect. Running a sort of gun-cleaning swab up and down with a pendant on both ends is about the easiest way to clean it.

Look, too, for damaged plastic slugs that can hang up in the groove. Replace those that are nicked up or misshapen.

When it’s time to set sail, your best ally will be a good, long-lasting lubricant to minimize friction between the mast track and slides, which are subjected to a lot of twisting as the sail goes up or down.

The best lubricant would be one that need be applied but once a season. For a mast already stepped or in mid-season, the halyard, combined with a light downhaul and a swab of some kind, can be used.

Practical Sailor collected an even dozen lubricants—for an initial bench test. Eight are pressurized sprays, which are very handy to use. Two are wet gels. The other two are a car wax and candle wax.

Testing for a wear factor, simulating the repeated hoisting and lowering of a sail, could not be included in the test procedure. It would be very difficult to set up dozens of perfectly-matched situations, with actual masts or pieces of mast, along with various kinds of sail slides and slugs. Instead we made our own testing station.

The Test Procedure
To test the slipperiness of the lubricants, a 36″ x 36″ sheet of virgin aluminum was cut in half to create a long clean surface. To maintain the aluminum’s shape, 90° bends were “braked” on the two long edges (see photo).

Twelve columns were laid out on the aluminum, which was carefully examined for any surface imperfections. Applying the lubricants to the “chutes” required meticulous masking to preclude adjacent contamination.

Half of the eight sprays dried quickly (within 30 minutes), which is desirable. The other four remained oily. The two gels remained wet after several hours of drying time.

The wet ones—two gels and four sprays—were given 24 hours to dry. None dried completely (which would be inconvenient in a real situation). Rather than give the wet ones more drying time, we gently wiped the chute surfaces clear of any oily residue.

In addition, the residue on some of the quick-drying sprays was wiped clean.

Because some of the chutes still seemed slightly oily, the entire assembly was then set aside for an entire weekend, in the hope that each chute would become as dry as it was ever doing to get.

Note: If one were working on a mast, any lubricants that require extended drying time and repeated wiping would be vexing.

Common plastic dishes, chosen because they are most likely to be identical, were loaded with one-pound weights. A string from each dish was lead over the edge of the aluminum. Small weights were hooked on the ends of the string, increasing the load until the dish suddenly moved (like a team of huskies breaking loose a sled). Once the dish was in motion, it slid slowly but smoothly to the edge… and stopped, because the direction of the pull had changed.

By using combinations of weights down to 1/2 ounce, it was easy to grade the lubricants. The “first runs” proved very accurate. Subsequent runs, during which the bottoms of the dishes probably picked up lubricants, were invariably consistent and supportive of the first run data—which is displayed in the chart.

Because durability is a large factor, the test was repeated after extended exposure.

Initial Results
In the first round of tests, the best lubricant required less than half the “pull weight” of the best. This suggests that the best was twice as slippery as the worst. The weights necessary for each lube are shown in the chart in the initial test column.

The top product was Team McLube Sailkote. Tied for second were the Superlube and CRC. Fourth was 3M. All those are sprays. The worst, working up from the bottom, were the S & Z gel, the Kel spray, and the Woody Wax pump spray.

Worth noting, because of their showing after exposure, is that the candle wax and car wax did not stand out. They posted middling rankings, with candle wax tied for fifth and the car wax tied for eighth.

Final Results
After two months of exposure, the results changed dramatically, as might be expected. These results indicate which lubricant is still working well in comparison with the others.

The top lubricant was Elmer’s, which jumped from a tie for eighth place in the initial test to first, after exposure. Equally surprising was rather ordinary car wax, which moved from fifth initially to second place, and the candle wax, which vaulted from eighth to third.

As finally ranked, the best common products proved superior after exposure to the three “marine” lubes. Sailkote, which had a final rank of fourth, was the best “marine” product, and in fairness we should note that it’s a “performance” product, normally reapplied whenever things on racing boats start to slow down. Sea Spray tied for fifth (with 3M). Fastrac was ninth.

Price probably is not much of a factor in the selection of a sail track lubricant. But, for what it’s worth, Elmer’s (at 95¢ an ounce) emerged as the clear Best Buy.

All of this reinforces the opinion of many boat owners that things labeled for “marine” use too often carry inflated prices.

Fastrac, at $16 an ounce, must hold some kind of entrepreneurial record.

Of the three marine products, only the Mariner’s Choice Sea Spray, at 82¢ an ounce, carries a price to compete with Elmer’s.

All things considered, we can see no reason not to try candle wax, which works very well with external metal track, or, for a mast slot, a good non-abrasive car wax applied with a piece of rolled-up toweling with pull lines made of small stuff. 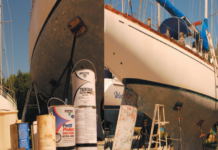