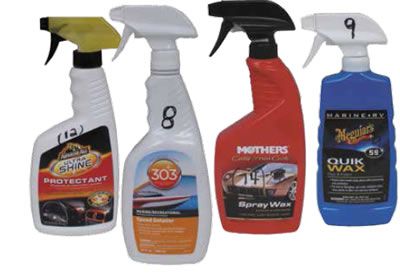 Is there a quick, easy way to get a glossy shine on the deck and topsides between the grueling wax-and-buff efforts? To find out, testers launched a search for affordable spray waxes-liquid waxes designed for speedy touchups rather than full-tilt compounding-and-waxing jobs. 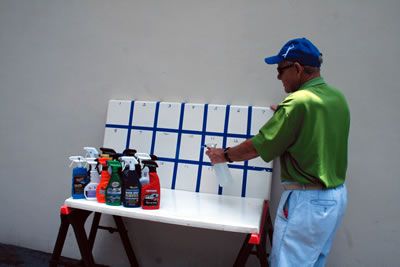 We specifically sought out spray-on products that offer a glossy finish and some surface protection and that are applied after rubbing compounds, fillers, waxes, and polishes. We evaluated products intended to help maintain hulls, cockpits, and topsides that are in good shape-not hulls that are badly oxidized or need more TLC than a spit polish. (If oxidation has started, you will need a rubbing compound; see the April 2014 issue online.) Think of spray waxes as detailers for surfaces-similar to the way Pledge is used as a furniture surface detailer.

In the past, weve evaluated paste waxes (see PS, February 2009 online), which are hard waxes normally sold in cans and tubs, and liquid waxes and polishes (see PS, July 2009 online). For this report, we looked at 14 spray waxes marketed for car, boat, or RV use that claimed to provide a high gloss.

The terms polish and wax are not necessarily interchangeable, and manufacturers have distinct definitions for each. In general, polishes combine fine powders, such as clay, with chemicals that react with a surface (gelcoat or paint), for a lasting, shiny effect. A wax, either natural or synthetic, provides a more temporary coating to give the surface a glossy shine.

A good natural wax will crystallize and provide a glossy finish from the heat generated from buffing and rubbing. As any boat owner knows, buffing is hard, time-consuming work. When the waxed surface is exposed to the sun and saltwater spray, the shine may last only a few months. Carnauba wax, a wax taken from the leaves of the Brazil-grown Carnauba palm, is the hardest natural wax, and it tolerates heat fairly well. Along with its use in vehicle polishes, Carnauba wax is used in lipsticks and on the surface of products like records, apples, and cucumbers. The newer, synthetic polymer waxes don’t require as much rubbing as natural waxes, and some last much longer than the natural ones. Some product formulas combine the two.

When choosing a wax, remember that a formula high in Carnauba may be best for a short-term brilliant shine, but one that provides a hard, glass-like coating and resists UV will likely have the best long-term protection.

Some of the test products use additives to protect against UV rays, while other formulas include Carnauba wax or PTFE (PolyTetraFlouroEthylene, also known as Teflon) for shine and protection.

All were advertised or recommended for boat, RV, and car applications to clean and maintain a high-gloss finish on fiberglass and other surfaces. All are available at marine chandleries, big box stores, or automotive stores. The Sudbury wax can be purchased from the maker online.

To test the spray waxes, we applied each one to a taped-off section of an old, white fiberglass hatch cover, and then we left the panel exposed to the weather for 30 days.

Testers prepped the test panel by washing it with West Marine Degreaser and machine buffing it with Meguiars No. 91 professional-grade Power Cut rubbing compound (PS Best Choice, April 2014) to remove dirt and scratches. Testers then applied a coat of NuFinish paste wax, an easy-on, easy-off paste wax that rated highly in PSs tests as a good, inexpensive polish with long-term protection. Each spray wax was applied according to maker instructions and then polished by hand with microfiber towels.

We applied one coat of each test wax to each test area. The applied products faced a series of bench tests immediately after application, and again after a month of weathering atop our Sarasota, Fla., workshop, in the hot sun and heavy rain. To gauge coating integrity and rate water repellency, each section was misted with water and the water-beading ability was rated. The gloss test was carried out in a darkened room, where we aimed an LED flashlight at each test section and rated the degree of clarity of the reflected light. All ratings are relative to the field at that test time.

In general, the instructions on the spray waxes were all the same: 1. Shake well. 2. Spray on a small area. 3. Rub in with a clean cloth. 4. When dry, using a second, clean, microfiber towel, lightly buff to a shine. All detailers emphasize using clean cloths and changing cloths often. The new microfiber rags work well because they easily slough off dust, dirt, and wax powder.

Since all of the spray waxes emphasized how quick and easy they are to use, testers noted any that were more labor intensive. Our ease of application rating covers both how easily the wax goes on and how easily it polishes off to produce a shine. The instructions on several product bottles make the point that they can be sprayed on when the boat is wet, encouraging their use after a washdown. While polish is intended for a once-a-year application, spray waxes should be used once a month to keep the shine and protection going.

It should be noted that our hatch cover test panel has seen a few years in the sun, and its surface is far from a new boat finish. Also, it is white and does not show spots and smudges as much as a colored gelcoat would. For our next test, we are looking for a new or well-maintained, dark-hulled boat, such as a Hinckley.

The test panels will remain mounted on the roof of our workshop for a few more months, so we can evaluate their durability.

Most of the test products did a good job of producing an initial gloss, but after 30 days in the near-tropical sun and rain, several test sections had noticeably lost their shine and water-beading ability, although testers found that all of the sections were equally easy to clean.

Overall, the standout on both the water-beading and gloss tests was Turtle Waxs Ice Premium Care, with Sudbury Miracle Coat and NuFinish Rapid Shine performing nearly as well. Turtle Wax claims the Ice Premium is the most advanced synthetic formula ever developed for maximum shine and protection. It combines natural Carnauba wax with hydrophobic resin polymer technology, creating a bond with non-porous surfaces for a longer-lasting protection. It also contains an adhesion promoter to help hold the wax and water-resistant polymers on any hard surface. Well have to see how the coating holds up, but for now, we can say this formula works.

Turtle Wax Ice- which is also one of the least expensive sprays tested (bonus)- earned our Best Choice pick.

Testers reported that the Sudbury Miracle Coat, which was launched in the summer of 2014, went on easily and wiped off quickly, leaving a nice shine. It is a Recommended product, as is the NuFinish Rapid Shine Foam Detailer, a detailer product for touch-ups, includes silicon emulsifiers for long-lasting shine. After 30 days, it was still beading water well and had a Good gloss.

Other spray waxes that showed fair performance include Mothers California Gold, as well as the water-based 3M Marine Clean and Shine Wax and Flitz Speed Wax, which also are Carnauba products.

The Mothers can work as a booster over an existing wax, as a stand-alone, or to maintain high-use areas. Its test performance was above average, and it was one of the least expensive products tested. It earns our Budget Buy pick. Mothers also sells a Marine Spray Wax speed detailer, which should deliver the same results; as far as we can tell, it has the same formula as the spray we tested..

Flitzs Speed Wax claims a super-fast, deep shine with protection that lasts up to three months, but the test section was already losing its luster after 30 days, earning a Fair for gloss.

Two of the more disappointing test results were from Eagle One and ArmorAll, which both notched Fair and Poor ratings for gloss. Eagle One Superior Nanowax uses nano-sized Carnauba particles to fill scratches and provide shine and water repellency. The ArmorAll Ultra Shine, however, does not contain Carnauba or other wax, but it does have UV blockers, a hardener, and silicone for shine.

Based on test results immediately after application and again after 30 days, we could not say definitively that one category of spray wax was obviously better than the other. The top performers were fairly evenly divided between synthetic waxes and those advertised as containing carnauba. These spray-and-wipe products will make a boat detailers job easier, but unless youre showing or selling your boat, the normal wax routine is sufficient to protect your gelcoat. Well keep an open mind though, and continue to use the top finishers. If we find anything worth reporting, well let you know.