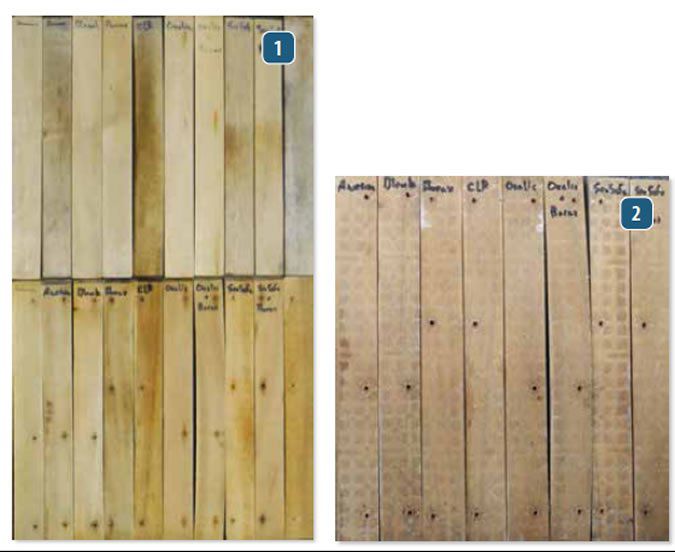 Most teak cleaners don’t just clean; they also remove weathered woods surface fibers and expose new wood. As much as 0.010 inches of surface teak can be removed in a single cleaning when using some common teak-cleaning products. Regularly cleaning with these products will shorten a teak decks life. Some also contain strong alkalis that can harm paint, caulk, and aluminum.

The chemical makeup is similar for most commercial teak cleaners: They use organic acids (usually oxalic acid) to break down difficult stains, and surfactants help remove oils and increase acid penetration. Two-part teak cleaners complete the cleansing with a neutralizer/mild cleaner.

In past issues of Practical Sailor, we tested and compared commercially available teak cleaners (see PS March 2008 and May 2010 online). For this report, we made our own inexpensive, do-it-yourself teak cleaners and compared their performance to that of the store-bought products.

We used Star brite Sea Safe Teak Cleaner and Brightener as a baseline for comparing our homebrew recipes performance. The DIY cleaner recipes focused on ingredients that are inexpensive and widely available. The DIY formulas we tested used oxalic acid, bleach, borax powder, lactic acid, ammonia, and a popular alkaline cleaner as active ingredients. We also tested a borax solution as a second cleaning step, using it to neutralize residual acid, clean, and provide anti-fungal properties.

After narrowing down the field, we tested the more promising homebrew formulas on an acacia-wood cockpit grating. We brush-applied each test cleaner to one plank, waited 10 minutes, brushed across the grain for about 5 seconds, and then, rinsed. Two test boards-one cleaned with oxalic acid and the other with Star brite Sea Safe (which contains oxalic acid)-were cleaned with the borax solution as a second step, followed by a very light scrub. We noted each cleaners results and relative ease of use. We left the cleaned samples in a damp, shaded area for two months to see whether some better resisted soil and mildew. The most promising formulations advanced in the testing rotation and were also tested on teak decks.

To determine whether the cleaners would harm aluminum, we brush-applied each product to a section of scrap aluminum toerail, and allowed it to sit for 20 minutes before rinsing. All of these products have the potential to discolor aluminum-although only one actually discolored it in testing-so it is prudent to test a spot for 10 minutes to determine whether the product is compatible with the alloy you have, and treat only what you can scrub and rinse in five to 10 minutes.

All of the formulations we reviewed are corrosive and irritate the skin. Gloves and waterproof kneepads are required when applying them. A respirator isn’t necessary, but you might want eye protection. In all but the most sensitive areas, the homemade cleaners can be used on the water without doing any harm to the environment.

Borax and ammonia are alkaline cleaners, so don’t mix them with acid cleaners. Because phosphate (TSP) contributes to algae blooms, we did not include it in our test. A simple scrubbing with water was ineffective on stains.

Observing the products after 60 days in a damp location revealed no changes in our performance rankings. Relative performance on teak and acacia were very similar.

Star brites Sea Safe Teak Cleaner and Brightener is based on oxalic acid with the addition of organic surfactants. It provided good cleaning with slightly less scrubbing than oxalic acid alone. We tested it undiluted, and the end result was very similar to using just oxalic acid.

Bottom line: We Recommend the Sea Safe for teak cleaning.

The most common active ingredient in acid-based teak cleaners is oxalic acid, which is often supplemented with additional cleaning agents. However, our testing suggests that oxalic acid (1 cup per quart of warm water) alone does an excellent job, perhaps requiring a little more scrubbing. Because it lacks surfactants, it may be less effective on teak that has been oiled and is black with dirt, but we couldnt tell the difference.

Oxalic acid, often referred to as wood bleach, was once a common hardware store chemical, but in most places, you must now order it online.

We used Savograns Wood Bleach for testing, and it cost $5 for a 12-ounce tub. The Wood Bleach product is technical-grade oxalic acid; it has no additives and-despite the name-it does not contain sodium hypochlorite. Any brand of plain oxalic acid would have the same result.

Bottom line: Cheap and effective, oxalic acid is our Best Choice and Budget Buy pick for reviving neglected teak with a DIY cleaner.

Chlorine bleach is a mainstay ingredient for washing residential decks. It lightens the wood and removes grime quickly; supplementing with 1 cup of borax per gallon of water helps with cleaning, if the grime is very heavy. However, many teak-decking and marine-cleaner manufacturers advise against using bleach on teak decks as it will wear away the teak more quickly than other chemicals. Also, if you like the rich colors of teak, bleach (1 cup per quart of water) may lighten the wood too much for your tastes. It was the only formula tested that discolored aluminum.

You can find bleach in any grocery or big box store for less than $3 per gallon.

Bottom line: Save the bleach for the most extreme cases of staining when nothing else works; keep it off aluminum.

Based on lactic acid instead of oxalic acid, Jelmars CLR is more gentle and consequently less effective for teak cleaning. We tested CLR (Calcium, Lime and Rust remover) undiluted, since that gave an acid content similar to the Star brite Sea Safe. Its not recommended for wood, and like many acids, it lightens wood.

CLR costs a little less than $6 for a 28-ounce bottle.

Bottom line: Though its little help with stained teak, CLR is a good choice for tasks that call for gentler acids.

Borax is an active ingredient in many cleaners. In prior tests, weve seen that borax is among the most effective anti-mildew agents for natural materials, and the USS Constellation, launched in 1854, is preserved in part by regular applications of borax.

In this round of tests, borax (a half-cup per quart of warm water) was moderately effective, but not as effective as acid-based cleaners. However, borax is gentle on wood and aluminum toerails, and it imparts some temporary rot protection. It also provided some additional brightening when used as a second step after acid cleaners.

Bottom line: Although it is not the most effective teak cleaner, borax is Recommended for routine cleaning and as a neutralizing rinse after using an acid cleaner.

A basic alkaline cleaner, L.A. Products Totally Awesome was anything but. It was not effective on soaked-in stains or for restoring teaks natural color. Also, the biodegradability of its surfactants is not known, so caution should be taken when using it near the water. We found it selling online for $1 for 16 ounces.

Bottom line: Totally Awesome is not Recommended for cleaning teak.

Cleaning with ammonia was suggested by a reader, and it surprised us with very good results. It appeared to raise the grain just a bit more than other products, but there were considerably fewer wood fibers in the rinse water. It showed some potential for discoloring aluminum. Ammonia is also sometimes used by finish carpenters to darken wood, particularly white oak; so test it in an inconspicuous spot first. Use undiluted.

We used the Up-and-Up brand (Target store brand) for testing. It sells for about $1.25 for a 64-ounce bottle.

Sure, you can buy a marine teak cleaner and it will work, but you can’t go wrong by trying a homebrew first; they are inexpensive and can be very effective. Our recommendation is to use a borax solution (half-cup of borax per quart of water) as a periodic cleaning aid, whenever water alone is not enough. When serious cleaning is required-and this should be done no more often than annually because of wear and tear on the wood-our choice is an oxalic acid solution (one cup of plain oxalic acid mixed with one quart of warm water). If desired, a borax solution (half-cup of borax per quart of warm water) can be used as a second step to neutralize residual oxalic acid, brighten the wood, and impart some temporary mildew protection.

Practical Sailor solicited teak care tips from a few industry veterans, and we found that maintenance methods are like snowflakes: No two are alike.

John Neal—captain of Mahina Tiare, a Hallberg-Rassy 46 sail-training ship—said he rinses the deck regularly and that once a year, he washes the decks with a very soft, fluffy brush and a solution of fresh water, bleach, and dish soap. He lets it sit for five minutes or less, and then thoroughly rinses the deck. Once or twice a year, Neal uses a borax solution to prevent mildew.

Teak-deck manufacturer Teak Decking Systems cautions against using bleach on decks, as does Star brite Vice President Jeff Tieger. For regular maintenance, Tieger suggests washing down the decks with fresh water and a mild boat soap. For bigger jobs, he recommends a teak cleaner or brightener. According to Tieger, sealing the deck with an oil or sealer will prolong the life of the teak and will protect the wood from getting the washboard look when the soft grains wear away. 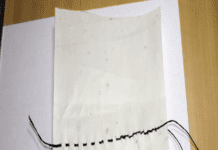 It’s Hard to Beat Needle and Palm for Hand Stitching 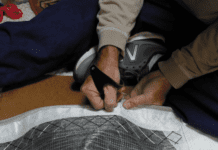