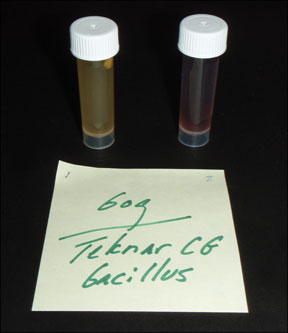 Cruising sailors who venture to the fringes of civilization, or to attractive but perhaps unsanitary foreign ports, or even to unfamiliar marinas, often have reason to view the sources of their drinking water as dodgy. Unless theyre willing to carry bottled water or have a watermaker on board, they catch as catch can, and sometimes what they catch isn’t any fun.

Boiling water and adding chlorine or purification tablets is a standard way of dealing with potential drinking water problems, but sailors may also want to consider a simple, relatively inexpensive gadget that trail-hikers, mountaineers, and other land-oriented adventurers have known about for the past few years.

The SteriPEN, one of Readers Digests 2007 “25 Products That Will Change Your Life” and Wireds “25 Gotta Have Gadgets of 2008,” kills water-borne viruses, protozoa, and bacteria with ultraviolet light, wrecking their DNA.

This is not a new technology. Its effectiveness has been understood since the late 1800s, and UV water treatment is common today in big industrial settings like bottling plants and hospitals.

The SteriPEN is basically a personal, handheld version of the technology-a battery-driven fluorescent UV lamp in a quartz probe. You turn it on, wait for confirmation that its ready, stick it into the water (making sure that its accompanying sensors are submerged), and use it as a stirrer for a prescribed amount of time.

The product comes in Classic ($90), Traveler ($90), Adventurer ($100), and Journey ($130) models. They all do the same job, but have slightly different sizes, capacities, and features. We tested the Adventurer model, which is 6.1 inches long, weighs 3.6 ounces, and can decontaminate a half-liter of water (17 ounces) in 48 seconds or a liter in 90 seconds. Its UV lamp is made to last for at least 8,000 uses at a liter each, or more than 2,100 gallons, before needing replacement. It runs on two 3-volt CR123 lithium-ion batteries, disposable or rechargeable. The disposables last for about 100 treatments, the rechargeables for about 60.

The basic Adventurer kit comes with the SteriPEN, a neoprene carrying case, and two disposable CR123 batteries. Theres also an optional solar-charging case, a cleverly designed box with form-fitting foam protection for the SteriPEN and an integral charger that will recharge two batteries in two to five days of good sunlight-a good way to keep the batteries topped up. For faster recharging, the box comes with an AC adapter. An optional 12-volt cigarette lighter adapter is available.

The SteriPEN website carries an impressive list of impartial test successes, starting with the EPA protocol tests and EPA challenge water testing. The device has been shown effective against problems including Escherichia coli, bacteria, giardia, cryptosporidium, staph, and a wide range of viruses.

Nevertheless, we wanted to have a look ourselves. There are dozens of unwanted things that can be tested for in water, some harmful and some merely bad-tasting,

so we focused on bacteria, some of which are coliform bacteria from the intestines of warm-blooded animals, including the subset E. coli. We bought EPA-standardized Watersafe testing kits and went to work.

First, we got water from a seasonal freshwater bog. The bog featured all the typical ingredients-algae, frogs, scum, leaves-but the standing water was relatively clear, not turbid. As luck would have it, just after we took our sample, a woman arrived at the next section of the bog and proceeded to spray the whole thing with Teknar CG, a biological larvicide. So we dumped out our first sample and refilled with water now freshly treated with bacillus thuringiensis, subspecies israelensis, a highly selective bacterium used in preemptive strikes against the mosquito population.

In the bright sun, we could see plenty of mosquito larvae swimming around the clear container. An hour later, they were all lying still at the bottom. There was, however, another energetic critter, about two millimeters long, looking like a flying fern leaf or aquatic trilobite, still doing the backstroke. Teknar CG is selective.

The water-test kit required 48 hours for results. Within that prescribed time, the contents of both dirty-sample vials had turned from purple to yellow, strongly indicating the presence of bacteria.

We “dosed” separate one-liter batches of the bacteria-laden water with the SteriPEN-a single 90-second shot for the bog water and two 90-second doses for the toilet water-and put the samples in test vials.

In the end, the treated bog-water was clearly negative. The bacteria were dead. In fact, they were dead within the few seconds it takes the UV light to destroy their DNA.

At about 30 hours, the toilet water began to lose its purple conviction, and at the 48-hour mark, it had swung over to yellow, with some residual purple hue, indicating the likelihood that there were bacteria left. Even so, we were impressed, considering the extreme challenge presented. If we were considering drinking water that nasty in the wild, wed dose it several times and boil it.

Its important for the SteriPEN to work with clear water: the UV light photons need to be able to hit the organisms. If the water is turbid or has bits of leaves or other objects suspended in it, you need to be able to filter it through a coffee filter, a cloth, or a dedicated water filter.

The SteriPEN uses light from the UV-C part of the spectrum-the part that can be harmful to skin and tissue. Sensors keep the light from working until they are submerged, at which point theres no exposure risk to the user. Still, directions should be followed closely.

We were worried about the fragility of the quartz-encased lamp, but it seems pretty sturdy. It will likely shatter if you drop it directly onto a rock or a concrete dock a few feet, but replacing the protective cap after use should prevent breakage.

The SteriPEN is not a desalinator, so it won't help in a life raft. Nor does it filter water or change the taste.

For getting at those invisible microscopic beasts, though, its a well-designed, well-built, and reasonably priced product. It is potentially of vital importance to some, and to many others it would offer peace of mind.

For those in need of occasional water purification along a populated coastline with access to fresh batteries, go with the basic SteriPEN package. But if youre planning to travel to parts unknown or places where regular water purification is advisable, spring for the optional solar-charging case ($80) and the 12-volt adapter ($13). The larger, LCD-equipped Journey is also worth considering.