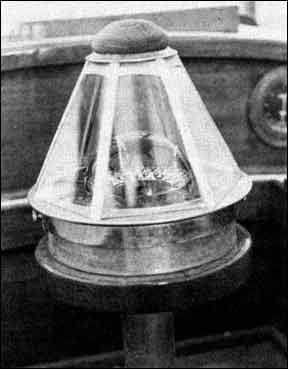 With a little care, boatowners can do a perfectly adequate job of compen­sating their own compasses. The ob­jective in compass adjusting is to neutralize the boat’s magnetism, not to make the compass point in any par­ticular direction. You can determine the effect of the boat’s magnetic field on any compass bearing by simply turning the boat 180 for the amount that the compass overshoots or under‑shoots a 180′ change is always just twice the effect of the boat’s field on that heading.

All you have to do is head zero degrees by the COMPASS (never mind what the heading actually is), then turn EXACTLY 180 ” and adjust the thwartship compensator to take out one half the over- or undershoot. Repeat on 90 adjusting the fore/aft compensator. That’s all there is to it!

My favored approach is to tie the boat bow and stern across some quiet canal on a near north-south compass heading, winch up tight and read the compass. Then swap bow and stern lines, winch up tight again, and take out one half the amount the compass over- or under-shot the 180 turn. Do the same on a near east-west heading, and then repeat the process until there is no remaining over- or under­shoot of the    turns.

This procedure provides exact neutralization of the horizontal com­ponent of the boat’s magnetic field at the compass location, which is the best that can be done with the two compensating adjustments usually provided on a small boat. The headings do NOT have to be exactly compass N-S and E-W. If they are within a few degrees that’s good enough. If perchance the headings chosen happen to be exactly magnetic N-S and E-W, then the two ad­justments would be uncoupled and exact compensation theoretically could be reached in one round of ad­justments. The further the chosen headings are from exact magnetic N-S and E-W, the more adjustments would be required to achieve com­plete neutralization of the boat magnetism, but even then the pro­cedure does converge to the correct adjustment.

Incidentally, you don’t really need two compensating magnets. Complete compensation could be provided by a single magnet mounted directly below the compass binnacle, and arranged to be raised or lowered to adjust the magnitude of the compensating effect and rotated to establish its direction.

Editorial Note: This simple procedure will, in fact, neutralize the vessel’s magnetic field within the capabilities of the internal adjusting magnets. However, the effect of the magnets can change on a sailboat as the boat heels, and it is also possible for the engine, when running, to affect the compass.

We would want to reinforce our faith in the compass, after neutralizing the boat’s magnetic field as much as possible, by running compass courses between a number of fixed points in known locations, under sail and under power, so that a good deviation card can be developed.