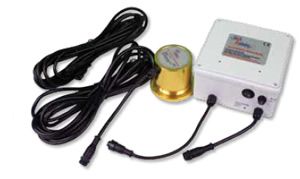 In April, we launched a long-term test of SmartAntifouling’s M20, an electronic antifouling solution that the maker claims uses ultrasound waves to prevent algae and barnacle growth on boat hulls. As reported in the June 2012 issue, the evaluation was set to run for a few seasons. However, after just three months of testing, disappointing results prompted testers to put the experiment on hold for now.

What and How We Tested

Made by the Canada-based SmartAntifouling, the M20 includes a transducer, a threaded stainless-and-alloy transducer mounting ring, a power head, and power cables (plus everything needed for mounting). The transducer, affixed to the inside of a boat’s hull, emits a high-frequency vibration that creates a thin layer of moving water around the hull, making it difficult for organisms to attach themselves. It’s marketed as being a more eco-friendly and less expensive antifouling method than copper bottom paint because there are no chemicals, no waste, and no pollution involved.

We installed SmartAntifouling’s M20-12-2 on our Sarasota, Fla.-based 1982 Cape Dory 25 test boat. The maker recommends using the M20 in conjunction with an antifouling paint for the best protection, so we coated the hull with Sea Hawk’s metal-free Smart Solutions (www.seahawkpaints.com) antifouling, taking full advantage of the technology’s eco-friendly implications.

After a few installation challenges (details in the June 2012 report)—including finding a spot to mount the M20 (the bilge), troubleshooting its excessive transducer cycling “chirp,” and having to add a new solar panel to power the device (it draws a half-amp)—testers turned the M20 on in early April and ran it for 12 or more hours everyday through early July.

We monitored the boat’s bottom regularly and had it professionally cleaned monthly. At the same time, we monitored the hull of another boat in the mooring field that we considered to be something of a test control. Both boats had their hulls painted about the same time with Smart Solutions; both see the same water and weather conditions; both are sailed once or twice weekly; and both are professionally cleaned monthly.

When PS began testing the M20, the test boat’s bottom paint was 2 months old and the hull was freshly cleaned. One month later, the hull was covered with algae and small to medium barnacles. The fouling was heavy at the waterline, and even at the transducer mounting spot, there was algae. The hull was then cleaned by a diver, and 30 days later, at the two-month mark, the bottom had large patches of solid barnacles and a lot of soft growth over most of the hull.

The control boat also had a disappointing amount of fouling shortly after the bottom paint went on. Interestingly, however, our Smart Solutions bottom-paint test panel (which is suspended from a dock in the same anchorage where the test and control boats are moored) had a fair amount of slime, but it was loose and could be wiped away easily, and the test panel had no hard growth after nine months in the water. Unlike the two boats, the test panel does not get cleaned, nor does it get moved. (Look for the results of our latest panel test in the October issue.)

According to SmartAntifouling, when using the M20 in conjunction with an antifouling paint, hull cleaning will still be necessary—but the maker claims this should entail only wiping away soft growth, not scraping off large sections of barnacles, which is what we had to do.

“The results you mentioned are understandably quite disappointing,” SmartAntifouling’s Bob Habib said. He explained that results will vary for numerous reasons, including environmental differences (salinity, humidity, water temperature and flow, and UV exposure, etc.) and boat differences (fiberglass thickness, how often the boat is used, how fast it goes, device installation, battery voltage, heat dispersion, etc.).

We agree, and we know that the test area, off the coast of southwest Florida, is known to be a high fouling area thanks to high water temps, lots of sunshine, and nutrient-heavy runoff. However, we’ve tested several bottom paints that offer excellent protection for multiple seasons in these waters.

“You cannot have a full and absolute antifouling,” Habib added. “However, we expect to see at least an improvement (when using the M20). Some people report full antifouling effect, and some report a reduced frequency of scrubbing, some a softer nature of growth, which makes it easier to remove, but very rarely is there a report of nil effect.”

Because the test control boat also had significant fouling, we obviously wouldn’t suggest the M20 caused the early onset of hard growth and slime, but we can say the ultrasonic device made no significant improvement to the fouling protection on our test boat, in this round of testing.

Results so far has been disappointing, but we think more testing is necessary to be conclusive. The SmartAntifouling devices aren’t cheap—prices start about $1,200 for the unit we tested—and we’ve not yet seen proof that they work well enough to justify the expense.

Testers were equally disappointed by Smart Solutions’ performance, and we’ll be looking into why it failed. (Look for a report in a future issue.) Once the test boat is re-painted later this season, we plan to re-test the M20 device.