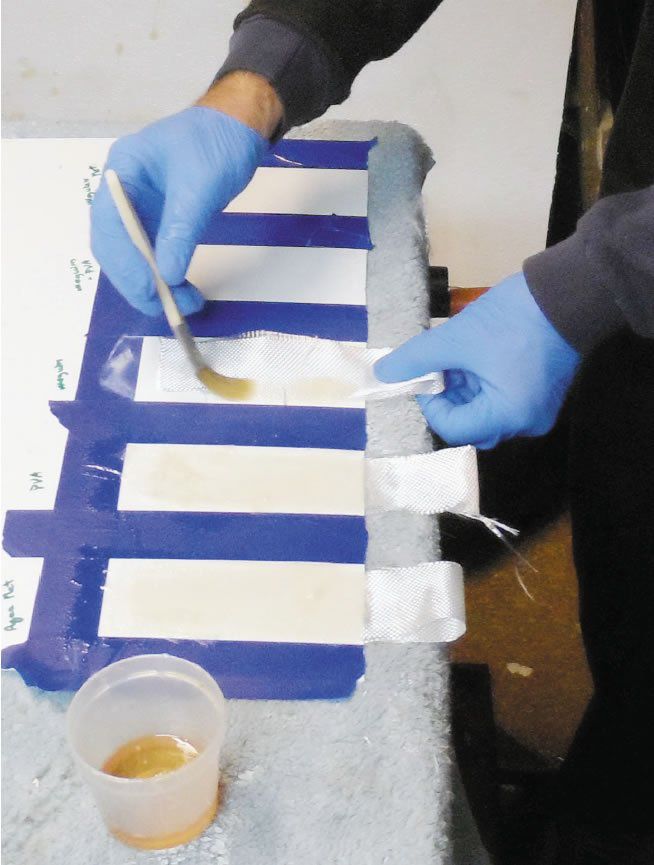 Our boats are molded, heart and soul, from fiberglass resin. And while sailors will argue for hours over the best splice, multi-function display, or anchor, repairs or modification to the actual fiberglass structure are considered a black art. However, working with composite structures is not much more complicated than woodworking; it just requires a new skillset and a different bag of tricks.

A common challenge is getting the resin (epoxy, polyester, or vinyl ester) to stick where you want it to (bonding) and to not stick where you don’t want it to (releasing from the mold). The first time that a do-it-yourselfer attempts a large molding, there is always some anxiety that the mold will not release. Then, theres the obstacle of removing the mold release agent from the surface; unless you remove all of it, paint, resin, and adhesives will slide right off the substrate like an omelet from a well-greased skillet.

There are only a handful of mold release agents that DIY fiberglass technicians commonly use: paste wax, drugstore hairspray (yes, hair spray-that horrible liquid plastic stuff used for producing rigid quaffs of the early 1960s), and poly vinyl alcohol (PVA), a sort of water-soluble liquid plastic. Conventional wisdom holds that wax is the workhorse option and that spraying PVA over the wax will offer added release insurance when molding complex parts. The downsides to this combo approach are time, cost, and that the PVA can run off the waxed mold and puddle on the bottom, slowing drying and leaving undesirable texture in the finish of the molded parts.

Using PVA alone does not offer sufficient coverage. While wax can be depended upon to coat everything (with several coats), PVA and hairspray often bead up on slippery plastics, metal, and anything with wax residue. Even the smallest fisheyes can permit tight bonding of the project to the mold.

Most-if not all-mold-release agents will leave some residue on the finished project. Over the years, weve had occasional troubles with paint adhesion in crevices and dimples that were the result of release agent residue. Perhaps we werent diligent enough during cleaning, but its hard to be certain that all of the release agent has been removed until you see how well the paint sticks years later.

With these challenges in mind, PS testers set out to find an effective, easy to use, and easy to remove mold-releasing agent.

We tested two PVA-type products: PVA Mold Release by Evercoat and Aqua Net Ultra Hold hair spray, which West Systems has said good things about as an alternative mold releaser. And we also tested one wax product, Meguiars Mirror Glaze 8 Maximum Mold Release, which is the most common one used in fiberglass work. However, we have used automotive carnauba wax-based products with identical results.

We masked a smooth, non-gelcoated fiberglass panel into 2- by 6-inch strips, coating each with mold release preparations. Where wax was used, two coats were applied, buffing between coats, as is common practice. To each panel, we bonded a strip of 6-ounce fiberglass cloth, formed into a loop at one end to facilitate peel testing when cured. We used West Systems epoxy with 105 hardener. We have used this same panel material for fabrications and know that properly prepared, the epoxy bond is stronger than the panel.

Samples were allowed to cure for two days. After curing, they were pulled from the form using the loops. The required force was measured, and the results were averaged.

We then decontaminated each 6-ounce fiberglass test strip according to standard practice; all samples were lightly scrubbed with trisodium phosphate (TSP) mixed with water (1 teaspoon/quart), and the waxed strips were additionally wiped down with xylene to remove any wax. We then painted one test panel set with Interlux Brightside enamel paint, observing any signs of slow curing, diminished gloss, or fisheyes. The other set had a similar loop of 6-ounce fiberglass cloth bonded, cured for two days, and peeled.

Our initial plan was to lay-up a test surface against a metal mold, using only PVA as a mold release. We wanted to be certain there was zero wax contamination. However, with both PVA and Aqua Net, even after carefully de-waxing the mold, it was impossible to apply a smooth coating without some beading and fisheyes. We applied several coats anyway, laid up a test sheet, and found it impossible to remove the laminate without damage to the mold and the laminate.

Although adhesion was greatly reduced, every place there was a gap in coverage, there was bonding. So we moved on to a surface we had used previously to layup test sheets using PVA only: fiberglass paneling. The slightly higher surface energy of polyester-resin fiberglass allowed both PVA and Aqua Net to lay down smoothly, with only limited fisheyes. This varies a lot with the surface, and if you are considering using PVA alone, watch very closely and apply two coats. PVA can also be sprayed; if the first coating is a light mist, followed after drying by a slightly heavier coating, fisheyes can be reduced, but not always eliminated, and it only takes a few to ruin your day.

The sections that were waxed exhibited extreme beading and fisheye formation when overcoated with PVA or Aqua Net. The PVA and Aqua Net covered evenly on non-waxed panels, though minor beading was observed if the coating was not carefully applied.

The PVA-only and Aqua Net-only samples both exhibited slower paint dry times and significant fisheye formation. The results reminded us of past experiences when amine blush was inadequately removed. (Amine blush looks like a waxy film that sits on the surface of the cured epoxy resin; unless removed, it can keep some applied products from fully curing.) The wax-only, Aqua Net-over-wax, and PVA-over-wax samples, which were pre-cleaned with TSP and xylene, dried normally. Our assumption is that our cleaning of the non-waxed panels with only TSP was insufficient and that secondary cleaning with xylene removed the last of the amine blush.

The bonding test gave a different bias. Because the epoxy was still slightly green, amine blush will not interfere excessively with bonding, and the difference in cleaning procedures did not correlate with results. However, both of the Aqua Net panels could be separated with a hard tug on the fiberglass cloth loops. The remaining panels were very tightly bonded and could not be separated, even with a sharp knife. Our assumption is that something in the Aqua Net was more difficult to remove or was embedded in the epoxy and interfered.

We have had good success using Evercoats PVA Mold Release alone on well-polished, fiberglass forms. Mold release was easy in testing, but it was also noticeably more difficult than with a wax base.

Bottom line: We Recommend Evercoat for use in combination with a paste wax, but not on its own.

Convenient and somewhat less prone to fisheyes than PVA, testers like using Aqua Net Ultra Hold hairspray for small mold projects and in tight corners. Unfortunately, our testing raised important questions regarding whether it can inhibit bonding.

Carnauba wax remains the best mold release, whether molding a complex part, something large like a hull extension, or just some flat panels for use as backing plates. Avoid silicone-based waxes; they are very difficult to remove from the project, and secondary bonding or coating will suffer badly. Liquid waxes often under-perform, so we recommend using only carnauba paste waxes.

Is using PVA necessary? We certainly don’t think it is good for general-purpose use alone, but it does measurably reduce the effort required to separate the product from the mold, and a stuck mold is nothing to sneeze at.

When molding fiberglass, the smallest details matter, but with careful attention, a few jugs of resin and some stringy cloth can turn some amazing tricks.