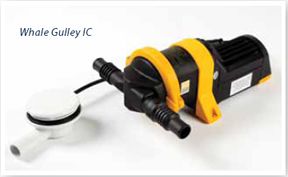 In regard to the article in the April 2011 issue on a shower solution from Whale Pumps (www.whalepumps.com): I have been looking for a solution to dispensing with galley waste, which I have been accomplishing with considerable frustration using a shower sump/pump that frequently fails and overflows gray water into the bilge. Upon reading the article, I discovered that Whale has two new pumps: the Gulley IC, which is exclusively designed for a shower, and a Galley IC, which is designed for galley sink waste and simultaneously an additional sink or shower drain.

I bought and (easily) installed the Galley IC; it has solved my galley waste issues. I could not be more pleased with this product and solution. Congratulations to Gulley for developing this product and to Practical Sailor for publishing the article.

I have a Galley Maid two-burner propane oven/stove combo on my 12-year old boat. I needed replacement knobs, but it was hard to find current contact info for Galley Maid online (www.galleymaid.com). I finally was able to talk to a second-party vendor, and a few days later, replacement knobs showed up in my mailbox, direct from Galley Maid, at no charge. They fit perfectly! Thanks Galley Maid!

I purchased new standing rigging from Rigging Only (www.riggingonly.com) in Fairhaven, Mass. Because I did not want to send the old rigging in, I measured the lengths and called them in.

When they arrived, I checked a short shroud and found it to match the old one, but when I re-rigged, the long shrouds were not long enough. I called Rigging Only and reported that the shrouds had been cut short. With no argument, they said they would fix them.

It later became clear that although I had made every effort to be accurate, my original numbers were short because of not stretching the wire enough. But Rigging Only never once acted in any way except to make sure that I was satisfied. The quality of their product and service is A+ in my book, and they will always get my business in the future, though I will send the old rigging in from now on!

I’ve used a Tilley Hat (www.tilley.com) for many years, cruising the California coast. It served me very well until the rim started to fray. I think the reason it deteriorated around the rim is because the manufacturer had inserted a thin plastic line to stiffen the rim.

Tilley Hats are guaranteed for life not to wear out, so I decided to send it to the company—not expecting a replacement—to show where it had deteriorated in the hope that they could improve on a wonderful hat.

To my surprise they immediately sent a new hat as a replacement, with no questions asked. (I noticed that they had removed the thin plastic line around the rim.) This a company that honors what it claims.

When we bought our boat, its Suunto (www.suunto.com) compass had a cracked dome and an air bubble in the liquid. The damage was clearly caused by some kind of impact, and the compass was a five-year-old original. I called the distributor for repair, but instead of fixing the compass, they sent me a brand new one free of charge.

Three years down the line, an air bubble appeared in the replacement compass, this time without any apparent damage. I emailed the new distributor, Tacktick in the UK, asking what liquid to add. I received a response within 10 minutes requesting a photo of the bubble and of the back of the compass. After emailing the requested photo, I got a message that a new compass was being shipped. The whole procedure took less than half an hour, and the brand new Suunto arrived about a week later. It is clear Suunto really stands behind its product.