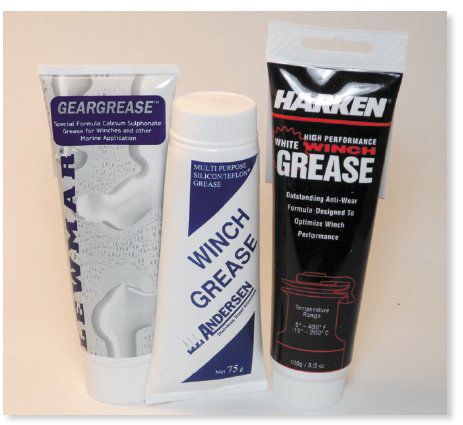 When it comes to most mechanical things-like wheel bearings on a car-its miles that wears em out, as my grandfather used to say. And while there are many reasons why 200,000 miles on a modern car is less remarkable than 75,000 miles was in his day, improvements in lubrication rank high on the list. Lubes of old would oxidize to sludge, stop circulating, wash out, fail to suspend dirt, and drop in pH from acid buildup-or all of these.

Sailboat owners can easily identify with the grease wash-out struggle; on boats, salt water is usually the culprit. We use grease to protect electrical connections, winches, and windlasses, among other things. A good dielectric grease can keep water and oxygen out of an electrical connection and inhibit corrosion (see PS December 2010). In the case of windlasses and winches, grease keeps expensive parts from touching each other, preventing wear and corrosion. Mechanical wear accelerates when corrosion and grit are introduced. Winches simply don’t see the miles that automobile wheel bearings do, so annual maintenance should prevent problems.

With this in mind, testers decided to launch our lubricants test with a focus on specialized winch greases that fight corrosion; well move on to multi-purpose lubes and preservatives in the second installment of this test series in an upcoming issue. Were also testing winches; for the first report in that series, see The Ubiquitous Winch in the August 2016 issue and stay tuned for the followup report in a future issue.

Although many sailors use automotive and trailer bearing grease on winches, such a small amount is used during each maintenance cycle that a tube of grease will last many years, making it less attractive to pinch pennies in this maintenance category. Thus, we restricted this initial review to winch-specific products, including only greases from well-known marine hardware manufacturers Andersen, Harken, and Lewmar. All of the test products are medium viscosity, waterproof greases intended to be changed annually; however, they are suitable for longer service in light use.

Be careful when comparing winch grease with a general slate of lubricating greases. Winch greases are premium products with extreme pressure additives that should provide much better wear protection to highly loaded, low-speed gears than a typical wheel-bearing grease. Additionally, note that while we are holding them to a much higher standard than the average bearing grease, our ratings are based only on heat stability and corrosion protection; lubrication is not judged.

All of the products were available in 4-ounce tubes; unless you are a commercial undertaking, this will last for many years, as only a fraction of an ounce is used servicing a winch.

This test report took a close look at grease wash-out and how it might impact a products ability to protect against corrosion. The standard test for evaluating grease wash-out is the American Society for Testing and Materials (ASTM)s D1264 method, which calls for a stream of water to be directed at a bearing and for the removed grease to be weighed. But in marine applications, no high-speed jet of water is likely to be encountered; instead, it will more likely be a drip or a wave. More importantly, we were interested in the thin film of grease that might remain and whether it would be able to protect surfaces from corrosion.

To find out, we modified a rock tumbler to provide a gentle washing. Testers filled the tumbler jar about two-thirds full with brackish water and mounted a bundle of standard metal samples (coupons) to one end. Aluminum, copper, and brass are galvanically coupled in one sample set, and cast iron and cold-rolled SAE 1020 steel are coupled in another sample set. The setup insulates the two coupon groups from each other, the tie bolt, and the brass legs.

Testers applied a uniform, thin coating of grease to each sample coupon and allowed the coupons to gently splash in the tumbler for 10 days; testers changed the water and cleaned the container daily to minimize grease re-deposition. We then observed and measured both corrosion and remaining grease coatings.

Because stagnant equipment often suffers more from corrosion, with nothing to move the grease around, testers also carried out a static corrosion test to simulate non-use. We used the same coupon setup, this time placing them in jars with the brackish water reaching only to the center point of the coupon to ensure air contact. These were left standing for 10 days.

In both tests, all metal coupons were weighed to the nearest 0.1 milligram before testing so that corrosion could be quantified. After exposure, coupons were degreased and observed.

We simulated aging by heating the samples to 500 degrees for one hour while exposed to air, noting weight loss and any significant changes in appearance or viscosity. While not directly related to winch use, oxidation stability is an indicator of resistance to oxidation and thickening over long time periods. (This would be important to those of us who procrastinate when it comes to hardware maintenance.)

The tested greases were less capable of protecting galvanically coupled metals than we had expected. Even though the grease had not been washed off, the first telltale bubbles of hydrogen gas sometimes appear within hours; even under the grease, the electrons will force a path through any weak spot. This can be reduced if the grease is regularly redistributed, and it helps if all surfaces are coated lightly with grease, including those that are not in actual mechanical contact.

After meticulously degreasing a windlass or winch, make sure to wipe a thin film of grease on every surface when you put it back together.

Corrosion in tumbler tests was severe, as the relentless scrubbing washed away the protective coating. The corrosion we observed was more severe than anything we have seen in actual use, suggesting this test is probably too severe for testing winch grease, but there are certainly applications that are this severe, like around seacocks, turnbuckles, and outboard engines.

The oxidation stability test revealed interesting differences. The Harken grease melted at 400 degrees and did not re-solidify on cooling (32 percent weight loss). This showing isn’t greatly important when selecting a winch grease, except that softening may be more noticeable in the tropics. Also, we wouldnt recommend it for powered machinery.

The Andersen grease showed considerable scorching, beginning at 15 minutes, and increasing considerably in viscosity (17-percent weight loss). The Harken grease also turned dark early in the test, suggesting breakdown. The Lewmar grease was unchanged in either appearance or characteristics (9-percent weight loss) during the heat test.

The clear Andersen Winch Grease spreads nicely, but it also washed off more quickly in tumbler testing than the Lewmar grease and allowed more corrosion than the other products. It did fare better in static corrosion testing, however, earning a Very Good rating. Testers also noted that it separated a bit in the tube. Per ounce, the Andersen was the most expensive.

Bottom line: This product is OEM-approved, an important factor, and performed better than a typical bearing grease would. Recommended.

The Harken Multi-purpose Winch Grease was a bit stickier than the Andersen. It showed slightly better adhesion, reducing wash-out. It also performed well in the static test. However, in the rotary tester, corrosion was a weakness.

Bottom line: Like the Andersen grease, the Harken lube is OEM approved and an above-average performer. Recommended.

In static testing, the metal coupons coated with the Lewmar Winch Grease simply did not corrode. Performance in the high-temperature oxidation test was impressive, suggesting this grease will not oxidize or stiffen over time, making it a good fit for lubricating gears and bearings in both winches and powered equipment. In the tumbler testing, there was trace aluminum corrosion, but considerably less than with other products.

Bottom line: This is our Best Choice for winches and for other boat machinery applications where high wash-out resistance is required.

In case you need another excuse, going sailing every month will help the grease to remain sufficiently distributed on deck hardware to prevent corrosion. Boats that are stored should periodically have the winches rotated and the windlasses run (letting out a few feet is sufficient) to keep the grease well distributed. And when you clean your winches, make sure that you very lightly coat all surfaces to prevent corrosion; the solvent can do too good of a job.

Testers liked the Lewmar grease for all-around metals protection on deck hardware. However, all of these products have well-established track records and would be suitable for on-deck gear.

Are there other waterproof greases that can serve as well, or better? To find out, we are testing a cross-section of common marine and vehicle lubricants-and some are pretty impressive. Are there other products that would be better for anti-seizing protection or steering-gear lubrication? Yep, were working on that test, too. Stay tuned for these reports in upcoming issues.

If you have a favorite all-purpose grease that you recommend, email us at practicalsailor@belvoir.com.

1. The test coupons: The first two columns are from the static corrosion test—aluminum/copper/brass (column 1) and cast iron/steel (column 2). The third and fourth columns are from the tumbler testing—aluminum/copper/brass (third column) and cast iron/steel (fourth column). 2. To test wash-out, we modified a rock tumbler to accept a bundle of standard ASTM corrosion coupons. 3. The tumbler jar holds a bundle of five metal, corrosion-test coupons.