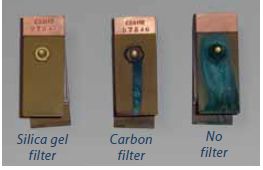 In the wake of our report on fuel-tank vent filters in the January 2013 issue, a few readers asked how silica gel could have out performed activated carbon in controlling VOC emissions. To clear up any confusion, we thought an explanation was in order:

The report started out as an interest in E-10 fuel (10 percent ethanol) and phase separation, the process in which absorbed water drops out of suspension in ethanol-laced fuel. Left alone, this water can lead to corrosion and costly engine damage. We began by looking at what it takes to make E-10 fuel unstable. In our tests, we noticed that alcohol in the E-10 was evaporating faster than the gasoline. Our fuel samples would absorb water, some ethanol would evaporate, and the samples would become unstable and phase separate-because ordinary gas (without the ethanol) can’t hold water in suspension.

This evaporation was so extreme that we had to severely limit it before we could perform realistic tests. And this is what the U.S. Environmental Protection Agency (EPA, www.epa.gov) missed. Their reports do not mention that the vapors are NOT ordinary gasoline, but actually contain about 24-percent ethanol. Apparently, the EPA also never considered that carbon is very poor at controlling alcohol emissions. We suppose this factor wasnt particularly important to the EPA-ethanol is harmless in the air. It also neglected to consider how moisture exchange in a foggy environment can saturate the carbon filters with water, rendering them ineffective for adsorbing gasoline vapor.

How is the carbon incapacitated? When an adsorbent (yes, it is adsorbent not absorbent in this case) like carbon is coated with a liquid that is immiscible with what it is intended to adsorb (gasoline doesn’t mix with water), it becomes ineffective. Its as if each carbon pellet were sealed in plastic wrap.

Most critically, the EPA didnt recognize how important it was for boaters NOT to lose ethanol in the venting process, otherwise phase separation could accelerate. As our tests showed, silica gel does a better job than carbon at capturing alcohol in humid air, thus slowing down, even preventing, phase separation.

But how can silica gel out-perform carbon in combatting VOC when gasoline is still present in the vapor? Short answer: Because it is more effective at capturing ethanol. Warm, humid air trying to enter the tank contains only 2 percent water by volume, while the tank vapors leaving the tank contain about 24 percent ethanol by volume, enough to prevent water vapor from entering.

Being more like water than gasoline, the alcohol adsorbs into the silica gel and displaces any water in the filter; it is as if you were drying wet electrical wires by wiping them with alcohol. Once the water is gone, the gel is ready to adsorb gasoline as well. Thus, ethanol keeps the silica gel dry so that it is more effective at keeping water vapor from entering the tank AND at preventing gasoline vapors from escaping.

Could a two-bed filter (carbon on the tank side, silica gel on the atmosphere side) be even better? Maybe, as this is sometimes done in commercial vapor recovery systems. In our view, boat manufacturers, who are being required by new EPA rules to install carbon-laced fuel vent filters in all new gasoline-powered inboard boats, should initiate further research on this in the interest of their customers. 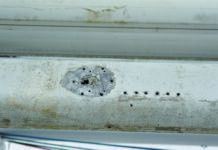 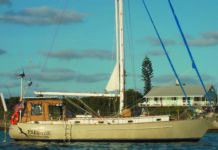 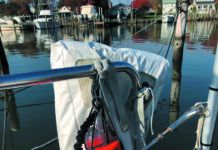