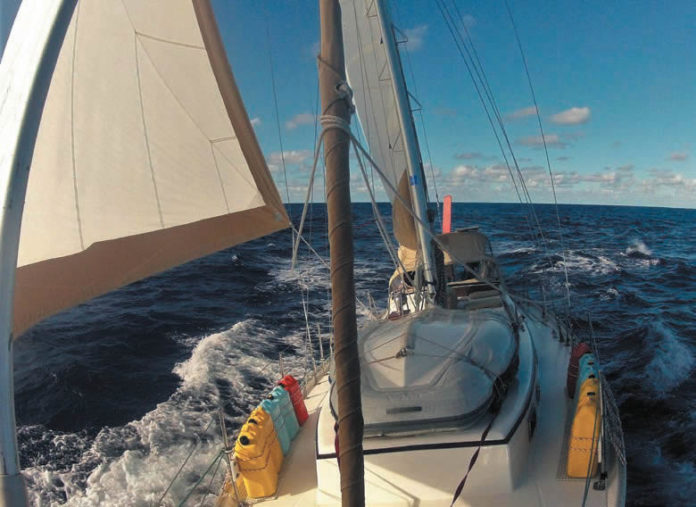 I read your recent Inside PS blog on alternator care, Ten Tips to Prolong the Life of Your Alternator. This article was extremely helpful and much appreciated. I was hoping someone would be kind enough to explain the best method to align the alternator pulley with the other engine pulleys. I have not been able to locate anything written about how this would be achieved. If it makes a difference, I have a Yanmar 4JH5E with a stock alternator. Let me explain further that my question is how to make an alignment adjustment. I understand the idea of using a straight-edge across the face of the pulleys to check alignment, but if I discover mis-alignment, how do I correct it. Perhaps this is dead simple, but in just looking at the owners manual and searching the internet, I haven’t come across an explanation of how to do this. My next move is to just grab some wrenches and see if I can figure it out, but thought I might ask first.

Generally, misalignment is corrected by using shims placed where needed on the alternator mounts. Most auto parts stores will sell shim kits, which are essentially washers of varying thickness. Sometimes you will have to shim both bolts that attach the alternator. Often it is just one. In some cases you can also add or remove shims on the engine pulley.

Regarding your recent blog post, Repairing Leaky Portlights, what’s the trick for getting the old sealant out? We have an Ericson 38 with windows now almost 30 years old. Any ideas would be helpful.

To remove all the sealant will require disassembly. Once the portlight is removed, the mating faces where sealant was applied will have to be removed. Before you go too far down the road on portlight repair, check to confirm that you have a supplier for replacement components like gaskets and lenses, which might be broken in the process. Unless they’ve already been replaced, your ports are probably made by Lewmar. Even if you can cut or scrape most of the old sealant away, you’ll want to clean it with a solvent that removes any trace of silicone, which will inhibit adhesion. We recently tested adhesive removers for silicone and polyurethane. Old polyurethane can also interfere with adhesion, but is not as insidious as silicone. (See PS Tests Adhesive Removers, January 2017; and Removing 3M 5200, October 2017).

Dinghy Debate Round I

Regarding your recent blog post on dinghies, (see The Great Dinghy Debate, Inside Practical Sailor). I have used our 12-foot PortaBote since we bought it new in 2005. It is infinitely customizable. You can drill through the tough polyethylene hull sides to mount hardware (I wouldn’t recommend going below the waterline though). Ours still folds as designed, but we don’t routinely fold it. I have mounted folding rings inside and out to hold docklines, fenders, lifting eyes for the davits (where we normally carry it), and a low mounted bow-eye for towing. I’ve got LED running lights, a fishfinder and rod holders to go fishing in the canals and mangroves here in Southwest Florida, seat cushions and under-seat storage for life jackets and a pump, and a pocket that holds our wine bottle for booze cruises. We can plane with two people with our 6 horsepower Tohatsu, and we’ve carried seven passengers once during a club cruise, including our fellow cruisers with deck-stored inflatables who didn’t want to have to launch and recover their dinghies to go to dinner.

I keep a two-person inflatable kayak (SeaEagle Fasttrak) on the trampoline of my 28-foot trimaran, under a silver tarp to block the sun. Light and easy to handle, stable, very gentle on topsides, it moves right along with two double paddles. Looking to get inflatable seats, to keep my backside up off the bottom, where it can get damp.

We recently compared the various kayaks on the market and are still looking for recommendations of folding kayaks to test. (See Kayaks for Cruising Sailors, October 2017.)

Regarding your recent shorepower cautions (PS Advisor, April 2018), we spent the night aboard last night and realized that our main 30-amp breaker was tripping with less than 10 amps of load. We went to bed falsely concluding that the Magnum 2012 inverter charger was simply working too hard to keep our old house bank of AGMs topped off, so we shut it off at the breaker before bed. I woke up to a constantly tripping main breaker so I turned off the breaker on the shore pedestal, opened up the access panels and started sniffing for that burnt electrical smell and feeling for warmth on the wires. In no time I found a hot one coming off the back of my Smartplug shorepower inlet on the transom. It also failed the sniff test. We had a spare aboard, replaced it in no time and have been running full power for an hour with no issues. Lessons learned:

1. If the shore power cord may have had saltwater intrusion, condemn it and never plug it into an electrically clean boat. Salt-water corrosion is a very rapid and dangerous cancer on stranded wire.

2. If you have warning like unexplained breaker trips, look for a problem immediately. Our problem grew quickly.

3. Understand the layout and electrical runs. Keep documentation for equipment.

4. Keep an assortment of spares and reliable tools aboard. Look for other opportunities to make your boat safer. In short order I will be adding a galvanic isolator and a 30-amp breaker within 10 feet of the shorepower inlet

Also, I noticed that the Galvan-Alert mentioned in your article was discontinued both by West Marine and by its maker, Marinco, a few years ago. I confirmed this personally with by calling Marinco last fall when I tried to buy it but was unable to locate a retailer with stock. Too bad, it was a good idea.

One of the issues we had with the GalvanAlert device was that the green light indicating that the system checks out could remain on, despite the fact that a potentially dangerous open ground situation exists. In freshwater, such a scenario could be lethal to swimmer. Perhaps this was one of the reasons for its disappearance from the market.

Like every other electrical connection on a boat, dielectric (bulb) grease prevents corrosion. A little put into the female side of the connection makes a big difference over time. The male becomes coated when inserted. Tightening up the threaded ring lowers stress on the connection and lowers movement at the contacts.

Your recent report on tether clips is great (Safety Tether Scrutiny, March 2018). Thanks for putting it together. I have often wondered why there isn’t a bigger crossover between sailing and climbing! I have over 30 years experience in both sailing and climbing and as you know, climbers are pretty switched on when it comes to things like abrasion, cross loading carabiners, knot strength etc. I know some people will reduce the length of a tether by tying a knot in it, or doubling it around a jackstay and back to the harness. I don’t agree that either of these methods are good, for a number of reasons. There is always a risk of karabiners cross loading (or potentially opening) on U bolts and padeyes, using a soft tape loop reduces this risk (but does add another link in the safety chain). In terms of knots and strength of tape, there are some really useful links (from a climbing company in North Wales) about Dyneema and nylon slings. It is important that folks have an understanding (which you so articulately provide) to enable them to make a judgement and not just go down the road of blindly following the masses or the marketing! Finally, it is the Kong Trango, rather than Tango (as in Trango Towers!)

It appears that Trango Towers, a premier climbing destination in Pakistan, means little to sailors, but Tango, the dance (as well as the letter T in radio comms, as in whisky, tango, foxtrot) is familiar enough. Thus, the European Trango for avid climbers becomes the Tango for American sailing enthusiasts.

Regarding your recent Inside PS blog post Staying Out of Trailer Trouble, don’t tow without locking your boat trailers coupler with a pin or bolt or padlock on the release lever. Couplers uncouple! When they do, consequences might be very expensive. Many online retailers have trailer coupler pin. Repairs costing more than $1,000 could have been prevented by my using a $3 coupler pin!

I second the conclusion of your recent electronics report (Testing the B&G Zeus Nav System, February 2018). In the spring of 2017, I added the 7-inch Zeus3 with new sonar, depth and speed gauges, The forward sonar alone is so useful. I also added a new B&G VHF V50 fixed-mount radio with the H50 Bluetooth remote mic. The radios AIS receiver works great on the B&Gs MFD screen for ship traffic. I especially love the WiFi connection to my iPad and iPhone. I added the Navionics charts also. This year, I’m doing the wind and radar. Yes, I have the mast down right now and sure hope that goes well. I did lots of research so far, and I absolutely love this system. Next will be an auto pilot.

In the May 2018 PS Advisor, we incorrectly stated that Biobor EB should be used for diesel fuel. In reality, it is Biobor JF. The Biobor EB is for ethanol blended gasoline.

Mike Meadors Cayuga is a 1991 Valiant 40  one of the last ones built before the same hull mold was switched to production of the V42 that hails from Ithaca, NY. Mike shared his secrets to solar panel success in last months Mailport.

Jim and Pat Ripple sail s/v Caper, a Hylas 46 that calls Canton, Ohio home. However, she usually sails the windward islands of Eastern Caribbean. The picture is of Capers approaching the island of Bequia in the Grenadine Islands. 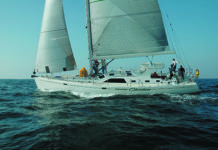