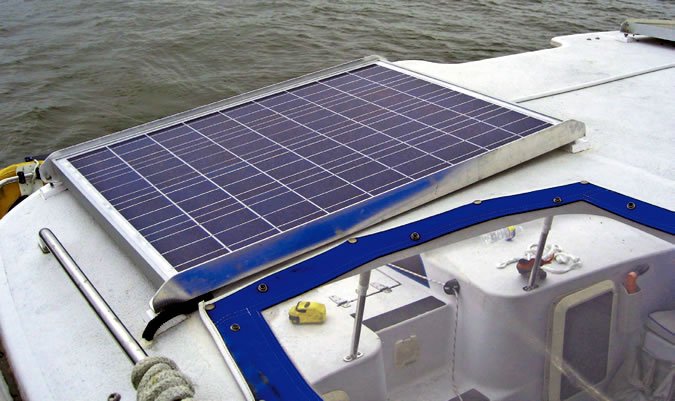 Regarding your recent blog post on cleat strength (Inside PS blog Striving for a Stronger Boat Cleat), a stout-looking Herreshoff-style aluminum cleat on my 1984 Sea Sprite 34 failed while moored in a storm in Maine last fall. The wind and waves were strong enough to lay the boat on its beam ends, with bare poles. The aluminum failed near a 5/16-inch stainless bolt, but the other three bolts held, as did a similar cleat with a backup line to the mooring. Take the problem seriously: there was no obvious sign of failure before it broke, and had it been a two-bolt cleat I think the whole thing would have gone. Im replacing both cleats with bronze cleats from Spartan Marine.

I have a couple of points regarding your April blog post Solar Panel Sense. Even minor shadowing from rigging, not just sails and boom can cut photovoltaic power output considerably. Getting full standard test condition rated output (STC) with properly tilted panels, unless you sail in a cold, high latitude location, is unlikely. As sun hits the panels, they warm considerably from the 25 degrees C STC reference temp, which reduces panel voltage and output. Some panels specify normal operating cell temperature values (NOCT), which will be closer to the real world output. For properly tilted panels, roughly 70-75 percent of STC would be a reasonable approximation for NOCT values in most sailing environments. Marine haze, salt spray, etc., could reduce this further.

Regarding your April blog post Solar Panel Sense on choosing a solar panel, I used to design solar powered sites in remote locations and used a lot of complicated factors like solar insulation, latitude and shortest days without full sun by city. However, I am not sure where the 85 percent maximum charge factor that you use was derived. When we used charge controllers we could get near 100 percent of available charge, and we had a three-year replacement cycle. The new lithium cells change this whole equation as do super capacitor storage. If wind was sufficiently consistent above 10 knots we used wind chargers and actually had to dump charge (via a shunt). With the price of solar panels I would add as many panels as you have space for since you can never have too much amp-hours on a cruising sailboat.

Regarding your method used to record the number and capacity of your batteries in your recent blog post on calculating solar panel output Solar Panel Sense. You state that recognizing that you cannot draw below 50 percent charge without shortening battery life, and that you will seldom charge past 85 percent while away from the dock, only 35 percent of nameplate capacity is really usable. This is true only for standard flooded lead-acid batteries. Some AGMs and LiFePO4 batteries can be discharged lower with less detriment. This is true only for reliance on engine-powered charging systems due to the reduced bank acceptance rate as it charges. The solar charging system, should be sized to recharge the batteries to or near 100 percent for a full sun day. While it is true solar charging system output may be lower after high noon (without readjusting the solar panel angle), it is still usable output, and it may exceed the acceptance rate of the nearly-charged battery to bring it up to near 100 percent during the nine hours of charge time available in mid-summer. If it is not possible for the solar charging system to raise the bank state of charge to near 100 percent on a sunny day, use other charging sources in the morning to quickly get the bank up to a state where the solar charging system can reach that 100 percent mark. Many of the device load (Amp) ratings that you provide in the accompanying table are way too low. To better determine solar panel charging contribution you should calculate watt-hours/day (full sun), divide by panel open-circuit voltage (which is never 12 volts DC) to determining amp-hours / day.

Regarding your April blog post Solar Panel Sense on choosing a solar panel, I have a Suaoki 100 watt panel, running to a cheap Mohoo 20 amp Charge Controller on my Santana 22. It charges a Trojan Group 27 battery. Ive left the panel loose, but added a non-skid backing to allow me to lay it where I want on the deck, and not worry about it too much. We can move it out of the shadows, angle it, or stow it in rough seas. In my opinion, it is great economic solution for a small boat. My battery has never gone below 12.8 volts, even with the laptop on the inverter, all our navigation, all cabin lights on, two phones charging, the VHF operating, and cabin fan on. The battery usually floats at 13.8 volts during the day, and is almost always fully charged when we anchor or pull up to a mooring buoy. We can’t run our induction cooktop (10 amps @ 110 volts) for long, but were usually docked, and have access to shore power when cooking. Finally, our Trojan never went below 13.2 volts during the dark Seattle winter. No shore power required.

Regarding your recent article on performing a proper pumpout (see Hassle-free Pumpouts, PS April 2018), I highly recommend the use of a pumpout adapter. This is a plastic fitting that screws into the existing waste discharge deck fitting on a boat. The adapter fitting has a cam lock that will lock onto the pumpout hose in place of the standard conical adapter. These make pumping out a hands-free operation and help prevent spills. Pumpout adapters come in various thread sizes so they can mate with a variety of deck fittings. They are available from a number of marine suppliers. In some states they are given away free by the local US Power Squadron, US Coast Guard Auxiliary, etc.

Regarding your recent PS Advisor regarding seacock care (see Caring for Seacocks, Practical Sailor March 2018). I used to close my engine seacock, just like all the others, when I left the boat, but many years ago I needed some work on the engine and asked the yard to do it. I reminded them that the raw water intake seacock would be closed, but when I returned to the boat, the engine thermometer was stuck at maximum temperature – a clue that it had over-heated dramatically. Although the yard tried to hide what they had done, I was able figure out what had really happened. This was all to no avail since the engine (an original Atomic 4) was totally cooked. That began a three-year refit project which included repowering. Now, I leave the raw water intake seacock open so that if for any reason a stranger must start the engine, there will be cooling water.

Regarding your recent PS Advisor Caring for Seacocks, my 2015 factory new sloop, despite being constructed in South Carolina, was manufactured to the European standard as relates to seacocks and through-hull fittings. This standard allows the manufacturer to use materials that have a service life of only five years. It appears that on my boat (and others who own boats constructed by the same European based boatbuilder) inexpensive mixed-metal Tonval seacocks were used below the waterline rather than higher quality single-metal phosphor bronze or Marelon. Tonval fittings have OT58, CZ122, or in my boats case CW617N embossed on the valves. These contain 40 percent zinc. These Tonval fittings should be monitored very closely as they age and be replaced as soon as practical. Because the fittings corrode from the inside, the valves should periodically be checked per Mr. Laniers suggestions and a bung should be located/attached to each valve for safety.?

Clearing Up Plastics and Through Hulls

Your recent blog post on plastic through hulls starts with “Plastic Through Hull,” then refers to “Nylon” which implies they are the same. It infers that plastics should not be used below the waterline, yet many logs and depth sounders use plastics as do many rudder bearings. It then goes on to say, “Try fittings of some other, nonmetal material such as nylon.” And what is a GRP hull if not Plastic? It seems to me that a poorly designed/manufactured item—probably not intended for marine use—has made the author jump to all sorts incorrect conclusions and contradictory dictates.

Any plastic through-hulls should meet ANSI/UL 1121, the reference standard used in the ABYC Technical Standards.