I have an engine sound insulation question. My boat has a 70-horsepower, four-cylinder Westerbeke that is loud. The engine compartment is a small room under the cockpit that is big enough to sit up in. It contains the water heater, autopilot, battery boxes, and shelve, and the bulkheads are covered with filters, pumps, hoses, and wires galore, so its not possible to insulate the walls of the compartment.

What benefit is there if I build an insulated box over the engine itself? The engine compartment is open to the bilge fore and aft, and I imagine the bottomless box would allow air flow from the bilges to the filter. Would enough sound be absorbed and blocked by the box to make a difference?Is there another approach to consider.

Your engine is a marinized Perkins 4-236. Its an oldie but goodie, first introduced in 1964 in the U.K. and used to power more than 4 million Dodge vans. Not long after it hit the streets, the Westerbeke Corp., based in Massachusetts, began producing a marinized version. Perkins began extensive testing of noise reduction in diesels during the 1970s, but your early-era 4-236 missed that boat. Many of these engines have, shall we say, a strong vocal presence. However, there are a number of measures you can take to quiet things down.

Before diving into your sound-enclosure project, first check out the Inside Practical Sailor blog article Taming Engine Room Noise (posted Jan. 25, 2012). That report discusses the two causes of engine noise: vibrations transmitted through the boats structure and those transmitted through the air. It also describes specific steps that you can take to reduce noise, which might not require the construction of the sound box you are considering.

If you insist on a box, it should incorporate noise-attenuating insulation. In the online article Quiet Please! (PS, October 1999) we tested 10 sound attenuation products. Although the test may seem dated, the technology has not changed tremendously, and many of the products we tested-or some iteration-are still available. Products from Hough (now Hamilton Jet, www.hamiltonjet.com) and Soundown (www.soundown.com) were among our favorites.

When measuring for the boxs size, be sure to leave plenty of room for clearance. As a rule of thumb, Soundown suggests six inches of clearance around the engine, although this isn’t always possible. According to Soundowns Robert Bova, there are a variety of different water- and oil-resistant products that you can use to construct sound-attenuating baffles under the engine to transmit the noise through the bilge, but then you will almost surely need a blower to meet ventilation needs.

Your engine needs ventilation both for cooling and for combustion intake. Depriving it of air can lead to reduced power, engine damage, or worse. Anyone contemplating an engine enclosure should consult the relevant chapter of the American Boat and Yacht Councils Technical standards (www.abyc.org), as well as the engines manufacturer to determine ventilation requirements.

Each manufacturer uses slightly different formulas for calculating engine ventilation needs. Joe Joyce at Westerbeke recommended a blower for any box-like cover, even though an open-bottom enclosure with a large vent at the top might meet the minimum ventilation requirements, he said. Based on your engines combustion and cooling needs, he said, a blower of about 400 cubic feet per minute would provide more than enough ventilation for your engines cooling and combustion needs, but he could not say for certain without seeing the box design.

Joyce suggested that a modification of the engines air intake system is worth considering first. By using exhaust hose and a 90-degree elbow to put a bend in the Perkins standard air intake, you should see a noticeable decrease in engine noise. Sound doesn’t like to change direction, Joyce explained. He recommended contacting a Westerbeke service technician to talk about this modification or any others, to ensure that it would still allow ample air to reach the engine. 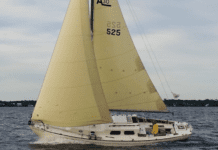