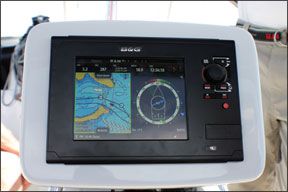 Navico, the parent company to Simrad, Lowrance, and B&G, has apparently shifted its marketing strategy, and is now putting its formerly high-end racing electronics into the hands of ordinary sailors. The new B&G Zeus Touch multifunction display is one of the first instruments to be released under this new campaign.

At first blush, the Zeus Touch appears to be nothing more than a dressed-up version of the Simrad NSS that we tested last year (PS, November 2012). It does everything that the NSS can do and looks almost identical to the NSS, with displays available in the same sizes: 7-inch, 8-inch, and 12-inch models. Zeus Touch even has the same controls and user interface as the NSS.

Virtually everything on the Zeus can be operated using the touchscreen, but all touch commands can also be carried out using the rotary knob or soft key buttons. The display screen is the same as the NSS, with some additional functions. The Zeus Touch interfaces with the same equipment as the NSS: autopilot, Broadband radar (PS, December 2012), and depth and wind transducers. It also uses the same cabling.

Except for the brand logos, it is hard to tell the difference between the units. If you recently purchased a Simrad NSS, you will feel right at home with the Zeus Touch . . . and you might also feel a wee bit peeved because the Zeus, which sells for only $50 more than the NSS, can do some pretty cool stuff that youll wish your NSS could do. But thats the way it goes with marine electronics-theres always something better on the horizon. The big differences between the two are the software and price. When we checked online, the 7-inch Zeus Touch was selling for $1,000, while the 7-inch NSS7 was going for $900-not including sensors, which can easily add another $1,000.

Sailing and tactical software has long been B&Gs strong suit. Many of the worlds high-performance yachts rely on B&Gs sophisticated Hercules system to keep them ahead of the competition, but these systems start at about $3,000. The Zeus is the first time B&Gs software has been tweaked for mainstream use and bundled along with normal chartplotter and GPS functions. The powerful package is housed in a compact, waterproof, and sunlight-viewable multifunction display that mere mortals can afford-but at $1,000, its still not cheap.

The Zeus Touch software is effectively a light version of what the big guys are using, usually networked with laptop and tablet computers. The Zeus Touch is not a substitute for the most sophisticated and state-of-the-art racing software, but rather a more simple alternative that is packaged into a multifunction display so that it will better stand up to life at sea. You can find more sophisticated programs, but unless you want to revert to a computer-based system and undergo the learning process, youll have to pay quite a bit more.

ZEUS TOUCH vs. NSS
As the Zeus Touch and NSS are so similar, a quick review of the NSS-currently installed on our tester Jonathan Neevess Lightwave 38 cruising catamaran-is in order. Neevess NSS is mounted on an articulated arm that allows him to use it inside the cabin or in the cockpit.

He has found that when the unit is inside the cabin-and its view of the horizon is blocked only by foam and glass, nothing metallic-the initial GPS fix can be sluggish, sometimes taking up to 5 minutes; but it has always achieved a good fix. Given Neevess experience with the NSS, we suspect that the built-in GPS on the Zeus will not work inside some boats, and that it will require the optional external antenna.

Clearly, before you start cutting holes in your instrument panel, youll want to check receiver sensitivity in your chosen mounting location. Another mounting concern is the magnetic latch on the cover for the micro SD card slot. Navico warns against placing the NSS near a compass, and our tests indicate that it will interfere with a handheld compass if its within six inches-something to consider if you plan to mount the chartplotter on the binnacle or anywhere near the ships compass.

The Zeus Touch will interface with an iPad using Navicos new GoFree wireless interface (PS, March 2013), but users need to remember that an iPad has the same waterproof qualities as soft tissue paper, so a protective case is essential (PS, November 2012). It is still not possible to control the autopilot screens on the NSS or Zeus Touch from the iPad.

To make full use of the Zeus Touch, you will need data input from transducers that read depth, wind (direction and speed), compass, and speed through the water. This data-in addition to course over ground (COG) and speed over ground (SOG) from the GPS-are required to make accurate tactical computations. All outside sensors can be networked through the Zeus systems generic ports. Any NMEA 0183 or SimNet/NMEA 2000 transducer will interface with the Zeus Touch, but youre less likely to run into interface issues, if you stick with transducers from Navico or Airmar, which supplies the depth and speed transducers for Navico.

You also will need to input your boats default polar data (indicating boat speed in various wind conditions and points of sail) or manually input the tacking and jibing angles youve derived. There is a default set of generic polar data, and this can be modified to suit a specific boat. Once this data is provided, the system can deliver fairly accurate velocity made good (VMG) toward your destination, and help you decide when is the most opportune time to tack when approaching upwind destinations.

This sail-specific tactical software generates a completely new page view in the Zeus Touch that is not found in the NSS system-the SailSteer page. This page presents the most relevant data (either default or user-defined) generated by the upgraded tactical software. Although the software is relatively simple, the displays are clear, and the system is reliable enough that it allows a helmsman to make decisions on the fly while the navigator or tactician conjure up more precise data using their sophisticated and expensive software at the nav station.

Sea-trial findings We sea-trialed the Zeus Touch in Sydney, Australia, on a bright day in early autumn. The brilliance of the sun made checking the brightness of the screens easy. These high-contrast screens are clearly viewed in direct sunlight and with polarized sunglasses, and they are clear even at oblique angles. Weve found this to be true of many modern displays.

The chief advantage of Zeus Touch is the availability of sailing tactical software at a price many sailors can afford. B&G calls its system SailTime and SailSteer, not to be confused with the wireless SailTimer app we reviewed in April 2013. The software lets users set the sailing characteristics of their boat by manually inputting tacking and jibing angles, or as polar data. The software uses this data to calculate tacking or jibing points to most efficiently reach a given destination (a mark on a race course or a waypoint on a route). Many of these functions are simple measurements that any skipper can predict or calculate using a paper chart and simple arithmetic. The SailSteer page, however, delivers this information instantaneously and continuously, and removes the chance of human error. The software will also take into account any tidal influence at the time, a vector that is often omitted from back-of-the-hand calculations.

The information can be displayed as either laylines on the chart or as a combined analogue and digital display on a compass rose. You can view both displays simultaneously using the standard split-screen function-although, because there is so much to look at, this is less useful with the smaller displays.

The compass rose screen provides a wealth of data: distance on each tack, tide/current speed relative to the boat, bearing to waypoint, time and distance to waypoint, etc. Initially, the display looks complex, but after a few hours, it all makes sense. One downside was that although the software calculates the effect that published tidal currents will have on your laylines, it has no facility to learn what actual tides are doing. Consequently, if you are beating up the coast, and duck inshore to get out of a current, the software does not recognize that on the opposite tack, the tide and the resulting leeway it causes should not be part of the calculation. So you might start on a new tack underlaying or overlaying the mark.

One function testers liked was the ability to pull up historical wind information. This easy-to-read graphical display charts wind speed and direction so that the navigator can easily discern trends. This feature is valuable to both cruising and racing sailors, allowing them to make earlier decisions about what sails to carry or what course to steer. In temperate areas, it can also give an on-the-water indication of how quickly a frontal system is approaching.

Simultaneous with the introduction of the Zeus Touch, B&G was also demonstrating the Triton range of instruments. We tested the basic 4-inch (4.1-inch diagonal) display. When networked with the Zeus Touch, the Triton instrument can display the full range of data, whether it be depth or apparent wind. You simply scroll with a very simple up-and-down and menu keys to find the information you need. For those who would like to simultaneously monitor wind, depth, and any other data without investing $500 in a second display, it is possible to program the unit so that it displays a rolling sequence of data on a preset schedule. All of the data can also be repeated on the MFD. Like the Zeus Touch MFD, the Triton displays are viewable in bright sunlight and with polarized sunglasses. The displays can be viewed at oblique angles up to 170 degrees, although realistically, you would have trouble reading any data at such an angle.

Conclusion
Navicos latest launch will certainly hold a strong appeal to gadget-hounds and high-performance sailors. Cruising sailors will benefit as well, but unless youre an incurable sail tweaker, it is something you probably wont miss. A wide range of much less expensive navigational software programs, or even apps like SailTimer, can help guide navigators through similar routing decisions, but having all that data at your fingertips at the helm is enriching-and intoxicating. Single-handed or double-handed sailors will especially appreciate the ability to be able to make well-informed routing decisions without ducking belowdeck.

The hardware itself is robust, the interface is intuitive, and installation fairly straightforward. The Zeus is backed by a two-year warranty (extendable to five at no charge), but you can bet that by the time two years are up, the next best thing will be on the horizon-and well find some reason to want that, too.